The Fear of Decline: Cultural Pessimism in Europe

Such cultural pessimism has been revived by the advocates of the new right wing in Europe. For more than a decade they have created hysterical or malevolent concepts such as “Eurabia,” “Londonistan,” or “Dhimmitude.” 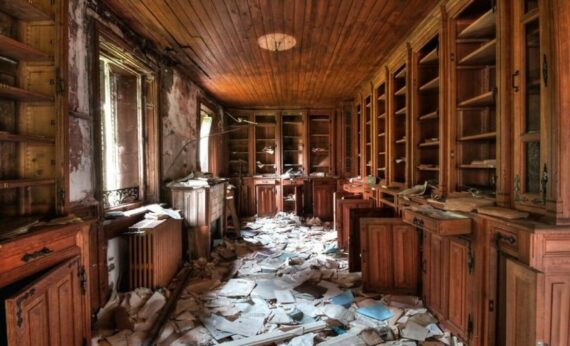 For more than a century, the emotion of fear seems to have been one of the main determining factors of the debate regarding demographic and social change in the West. Within this context, the Institute for Demoskopie Allensbach (IfD) has published a report on a national survey in Germany. The results can be summed up by saying that, although Germans have seen higher economic living standards in the last few years, many, mostly between the ages of 30 and 59, are not optimistic about their futures. International crises, terrorist threats, and changes in domestic environments are among the top reasons expressed by the interviewees, each of which inhibits a mundus optimus. According to Niklas Luhmann, everything we know about the world is influenced by the mass media. But the reflection of the pictures we are presented with is just a construct, not reality. The trend of skepticism when gazing into the future should not be surprising in an age where good news is no news. However, to rely only on the impact of newer technological developments on human beings – such as the mass media – without investigating the philosophical and historical background of sentiments such as pessimism, prostration, or discouragement will present a short-sided view.

SecurityBy Serhan Afacan
Constant change is one of the elementary factors of the nature of life and the world in which we live. In the last three centuries many important revolutions transformed almost every country on the planet. Great thinkers in history, such as Ibn Khaldun and Arnold J. Toynbee, saw civilizations in their historical processes as a sort of body that periodically undergo the segments of regular human organisms – from growth to death. In this line, German philosopher and historian Oswald Spengler published his influential book, Der Untergang des Abendlandes (The Decline of the West). Herein, Spengler presented an alternative model to the rational and enlightened idea of constant progress by pointing out that a decline of a civilization is a common, final, and natural result. But, more importantly, according to Spengler, the age of the decline of the West was already in progress at the beginning of the 20th century. Based on this, it may not be surprising that ideological terminologies such as “downfall” or “clash of cultures” have been used disproportionately in the political arena. A popular word in German political literature, for example, is the so-called clash of cultures, or Kulturkampf, which also belongs to the historic experience of Otto von Bismarck’s controversy with the Catholic Church. In the process of unifying German provinces into a single nation he saw the Catholic Church as a big threat, which led to an antagonism between the state and the church. These concepts matter for us as they are the ideological backbones of a neo-conservative worldview under construct today.Such cultural pessimism has been revived by the advocates of the new right wing in Europe. For more than a decade they have created hysterical or malevolent concepts such as “Eurabia,” “Londonistan,” or “Dhimmitude.” They have taken to the streets with their activist allies, such as the EDL (English Defense League) or the far more effective PEGIDA (Patriotic Europeans Against the Islamization of Europe), recently winning political influence in various parliaments with their political representatives, the FPÖ, Front National, or the AfD (Alternative für Deutschland), or even creating their own terrorists such as Anders Breivik. With these activities, Islam is their main focus. To the right wing, Muslims are seen as the main threat to Judeo-Christian Western traditions, and their public symbols as objective proof of the Occident’s downfall. This fear can also be seen in various polls conducted in Germany between 2014 and 2015, in which 57% of Germans saw Islam as a threatening religion, 52% were worried about the increasing influence of Islam in Germany because of Muslim refugees, and 72% were afraid of terrorist attacks.

These results can be seen as typical manifestations of the German Angst. However, a view of Europe’s current political landscape proves the opposite. Fear seems to be a regional, or even continental, attitude towards the now-visible Muslim community. But this concept of fear is not a mere expression of an uncomfortable emotion. It has become a major social challenge and even a research field in various academic disciplines: Islamophobia and xenophobia represent the irrational fear of “the other” by having prejudices and creating a discriminatory image of Muslims or other minorities. So, it is not surprising that some European states have revived the “mission to civilize” by banning the burqa and burkini (as in France), or even forcing Muslim students to eat pork (as in Austria). Society and demographics are changing as new types of people are appearing today, such as the German with a migration background or the “New Germans” (Prof. Herfried Münkler). What many populists or plain racists conceal is that change is not a synonym for downfall. As mentioned earlier, the concept of change has its own and sometimes unpredictable logic. It would be naive to believe that a country such as Germany still has the same homogenous populus it had in the 1920s. In places such as Berlin’s Kreuzberg, multi-culturalism is the norm, as it is in many world capitals and in other cities such as Offenbach, where 60% of the inhabitants have a non-German background.

Finally, it should be pointed out that fear can block rational thinking and thereby question ideas that have been fundamentally protected in legal documents for many centuries. As an example, the AfD’s questioning of whether or not Islam belongs to Germany is an irrelevant question in terms of the German Constitution. But the presence of fear, human rights, and constitutional guarantee create an oxymoron such that, for example, if religious freedom is a right provided by the constitution, then it is an essential element of the social contract between the people and the state according to social contract theory. One can add vague legal concepts such as living together (vivre ensemble) to this. But the burqa case in France provides a flexible tool for conservative approaches to limit the freedom of Muslims and move closer to the concept of assimilation. The president of the German Constitutional Court, Prof. Andreas Voßkuhle, referred to the German Constitution as the “constitution of the middle.” This seems to be a wise approach and should be a plea to lead discussions and debates regarding refugees, Islam, and demographic changes; a path advisable for those who represent either of the two extremes: Thomas More’s Utopia on the one hand or John Stuart Mill’s Dystopia on the other.