The fight against FETO continues

Speaking to reporters in south-eastern Gaziantep province, on Friday Abdulhamit Gul stated: “Recently all commitments have been fulfilled according to the agreements. That is to say there is no obstacle left formally for his (Gulen’s) extradition.” 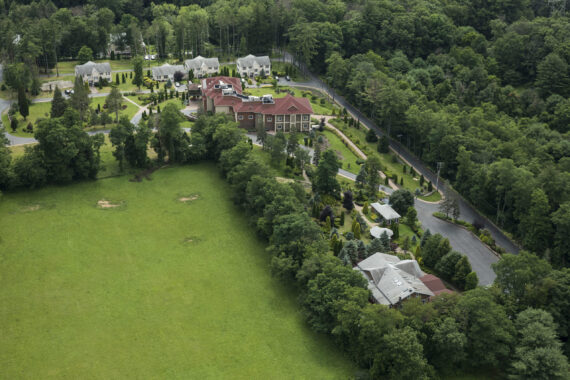 A view of the main building and houses at the Fetullah Terrorist Organization (FETO) compound where Fetulah Gulen resides in Saylorsburg, PA., United States. Anadolu Agency

On July 15, 2016 FETO criminal cult leader Fetullah Gulen, who is currently based in the U.S., orchestrated a military coup which martyred 250 people and left 2,200 injured.

While the coup failed, it is known that the terrorist organization has infiltrated Turkish state institutions, including the military, ministries, schools and universities.

Since July 15 many operations have been conducted across Turkey with the desire to free the country from the members of this criminal cult that have hidden themselves under a civil organization blanket.

Within latest efforts, an operation was launched on Thursday across 11 provinces including capital Ankara in order to arrest over 130 officials suspected of being linked to FETO.

The suspects include 101 personnel from the Finance Ministry and 32 from the Labor and Social Security Ministry.

Among the suspects, 129 had already been dismissed from duty for suspected links to the group.

In addition to the operations, on Thursday the Council of Judges and Prosecutors dismissed 39 judges and prosecutors after they were accused of being linked to FETO.

According to a source of the council, the decision was taken after a probe into digital material, including records of encrypted programs that FETO members use and information gleaned from statements and confessions of judges and prosecutors.

The encrypted program used by FETO members, ByLock, is a smartphone app which is believed to have been cracked by Turkish security agencies, allowing them to identify tens of thousands of suspected FETO supporters.

No obstacle left for Gulen’s extradition

While domestic developments in Turkey have been focused on capturing terrorists that remain in state institutions and domestic domains, has also confirmed that there is ‘no obstacle left’ in extraditing FETO leader from the U.S.

Speaking to reporters in south-eastern Gaziantep province, on Friday Abdulhamit Gul stated: “Recently all commitments have been fulfilled according to the agreements. That is to say there is no obstacle left formally for his (Gulen’s) extradition.”

Gul confirmed that all evidence against Gulen had been sent to the U.S. authorities and that now a state under the rule of law should do what is necessary.

The minister added: “We want the U.S. to extradite the leader of the terrorist organization which has killed 250 people in Turkey, of which there is evidence and has been documented in court decisions.”