The Future of CHP and Turkey’s Democracy

Will CHP be able to break the vicious cycle, contribute to democracy, find solutions to problems and inspire hope in the public? I truly hope so, but it’s a tough challenge for the CHP. 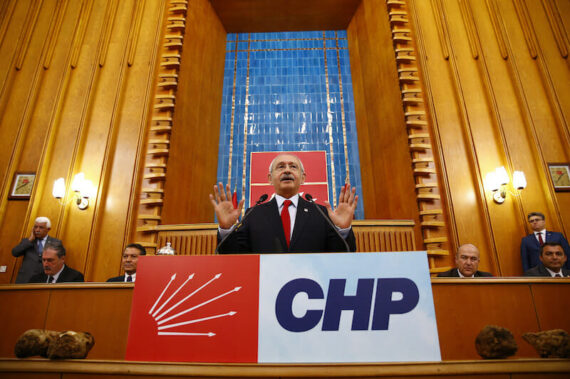 Kemal Kilicdaroglu, Chairman of the Republican People's Party (CHP), gives a speech during his party's group meeting at the Grand National Assembly of Turkey (TBMM) in Ankara, Turkey on March 13, 2018. AA

Having a legitimate, open and official opposition in a country is a vital indicator of democracy. In terms of concentration of power, every country has a government; the oppositions also exist in a similar fashion. Yet, in antidemocratic countries, the oppositions are obstructed and declared illegitimate through various methods. For this reason, it’s not the presence of a government that distinguishes democracy from other regimes; in fact, it’s the existence of an open and legitimate opposition that validates democracy.

In this respect, we might assert that oppositions as well as the government should have certain features in a democracy. The opposition’s duty is to keep the government in check within democratic boundaries and give the public the hope that a solution exists for each problem. This is where the government and opposition should stand. Having an open and legitimate opposition allows democracy, which is perceived as relatively unstable when compared to antidemocratic methods in the short-term, to be more stable than its alternatives on the long run.

CHP: more than an opposition

For a long time, the Republican People’s Party (CHP) has been carrying the mantle of the main opposition. Administrators of the party don’t seem troubled by this because securing more or less the same percentage of votes in every election allows the party to acquire a number of seats in the parliament and ensures them a presence in politics without too much effort. It seems that the CHP has grown accustomed to this mode of existence and doesn’t want to be disturbed. Or, maybe the party does want to break away from being the main opposition party but possibly is unable to break the cycle it created.

However the party congress held recently didn’t provide any hope for the possibility of breaking this vicious cycle. It’s the same old story for CHP and this saddens me greatly, as I believe that it is one of the most important political parties of Turkey and could contribute immensely to our democracy and our country.

What issues plague the CHP? I believe their issues could be discussed under two categories: procedures and principles.

Democracy is usually defined over the essence; however, these definitions are inadequate most of the time. They are even misleading sometimes. Exaggerated emphasis on the essence and every movements’ attempts to identify with democracy prevent democracy from consolidating. In order to annul this handicap, we should understand that democracy is about both procedures and principles; as it has always been the case in Turkey, we shouldn’t disregard and neglect the rules pertaining to procedure.

CHP’s democratic records are full of procedural failures. The party has pursued policies and acted in a way that cast justifiable suspicion upon its allegiance to democracy’s procedural rules in the last ten years.

Historically the CHP always sided with the junta after every coup in Turkey. The party either supported coups openly or was pleased by their realization implicitly. CHP finally distanced itself from coups during late Bülent Ecevit’s chairmanship. Unfortunately, his efforts couldn’t change the encoded values of the party; moreover, during the February 28 coup, Ecevit himself relinquished his anti-coup stance, rendering all of his efforts vain.

The CHP mentality always perceives coup d’états as a tool against democratic politics in its own favor. In recent years, the party has expanded the spectrum. CHP didn’t openly side with democracy in the fight between the legitimate government and the Gulenist criminal cult (FETO) that has been going on since February 7, 2012. It supported the Gezi Park violent protests, which was the rejection of democracy’s procedural rules by its own voter base, and incited the public. Moreover, CHP Chair Kemal Kılıçdaroğlu didn’t oppose the December 17/25 juristic coup and the party utilized the illegitimate tools FETO acquired through illegal means to attempt to depose the government.

Kılıçdaroğlu played the illegal and fabricated tapes in the Parliament. Even the July 15 coup wasn’t enough to sober up the CHP. With a late and hesitant statement, Kılıçdaroğlu expressed his opposition to the coup. A short while after, he renounced his stance. He put aside the actual coup, illogically distorted the term and called it a “civilian coup”; furthermore, he accused the government of perpetrating the coup and continues to advocate this claim, no matter how baseless it is. For this reason, CHP has to sincerely reaffirm its allegiance to democratic procedures and rules pertaining to it, showing the public that they are trustworthy.

Indeed, CHP is a political party; however, this doesn’t ensure being democratic. Communists and fascists also had political parties. Therefore, the main issue is whether CHP is democratic or not.

We can’t answer this question just by looking at CHP’s party congresses, the number of candidates for chairmanship or whether certain administrators are elected by delegates. In this respect, there is a mass confusion in Turkey. Intra-party democracy and democracy as a regime are associated and usually confused with each other. Democratic-ness is determined by inter-party competition rather than intra-party. Meanwhile, a political party’s actual discourses and actions are more indicative of its democratic-ness instead of its party manifesto.

CHP usually acts like it single-handedly owns democracy, but its mentality and ideology is plagued with a myriad of issues. Firstly, the party sympathizes with putschists. This is a matter of principle as well as procedure. It could be claimed that there are certain individuals or cliques within CHP that tend to advocate for illegitimate methods of acquiring power, such as coups or violent rebellions, because the public seem to have condemned the party to a permanent impotency. This has to be acknowledged. However, there is more.

CHP’s ideology is not compatible with democracy. Let’s put the discussions about whether Kemalism is contradictory to democracy aside; the classical Kemalist understanding which dominates CHP doesn’t allow any space for principles, rules and procedures of democracy. In this respect, Kemalism is enthusiastic about creating the “ideal” individual and society through the power of the state; furthermore, it wouldn’t shy away from pruning the ethnic, religious and even the cultural majority. This actually summarizes CHP’s political history. Despite the need for an overhaul, CHP does nothing in this regard. The most CHP does is to pretend it interprets Kemalism in a way that is compatible with democracy through masterful rhetoric. Yet, it’s a challenge to persuade the public to believe this.

CHP is an ideological hodgepodge. The party’s antidemocratic mentality is also nourished by their understanding of social democracy. CHP believes social democracy is only about state intervention to economy; more importantly to the society itself. This is one of the reasons why Turkish social democrats are more antidemocratic than Turkish conservatives or even nationalists. If we leave extreme leftist parties and Peoples’ Democratic Party (HDP) aside, CHP has the most radical vision of a society among the three parties that have seats in the Parliament.

CHP definitely needs to shift its ideology, and thus mentality, towards democratization. Maybe expecting this to be an intra-party process is in vain and unjust. Unfortunately, such effort doesn’t exist in social democratic and Kemalist circles. Indeed, it’s becoming worse. Stuck between hatred toward Erdogan and a lack of new ideas, CHP is having a hard time putting distance between itself and violent methods. I’m not talking about the limited violence that was encountered during the Gezi Park violent protests; I’m referring to the violence employed by terrorist organizations. CHP is unable to distance itself from both PKK’s and DHKP-C’s violence. It’s unable to react in the same way as it reacted to Daesh. This situation renders CHP untrustable and dangerous in the eyes of the public.

Will CHP be able to break the vicious cycle, contribute to democracy, find solutions to problems and inspire hope in the public? I truly hope so, but it’s a tough challenge for the CHP.

Atilla Yayla is Professor of Social and Political Theory and currently the chairman of Association for Liberal Thinking in Turkey.