The Future of Trump's Arab Coalition

Following the election of Donald Trump as President, the United States has adopted a new political strategy towards the Middle East. The most important component of this policy was the establishment of an Arab alliance, which would have two major aims: Following pro-U.S. policies in the region and fighting against threats that could harm Israel’s security. 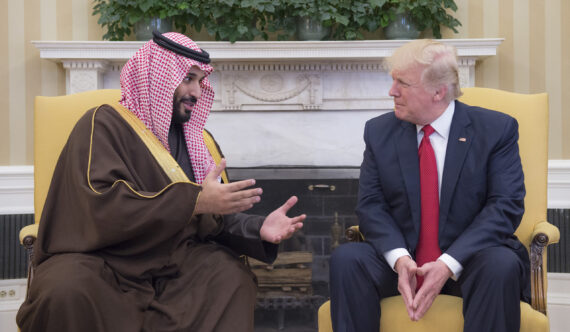 Following the election of Donald Trump as President, the United States has adopted a new political strategy towards the Middle East. The most important component of this policy was the establishment of an Arab alliance, which would have two major aims: Following pro-U.S. policies in the region and fighting against threats that could harm Israel’s security. In order to establish such an alliance, the U.S. focused on three countries – namely, Egypt, Saudi Arabia, and the United Arab Emirates. In this context, Trump made his first oversees visit to Saudi Arabia and then hosted Egyptian President Abdel Fattah al-Sisi at the White House. Trump also met with the de facto leader of the UAE, Crown Prince Muhammad bin Zayed, at the White House on May 15, 2017.

This initiative became the main pillar of the U.S. administration’s new strategy for the region. Within this framework, the leaders of these countries have begun to act with the U.S. administration in all regional and global issues. Increasing pressure on the Muslim Brotherhood and policies towards Iran can be noted as examples of the issues that the Washington administration, Cairo, Riyadh, and Abu Dhabi governments have co-opted.

The successful existence of this alliance is vital for Washington for several reasons. First, such an alliance is a crucial instrument in order to secure Israel from regional threats. The Trump-led U.S. administration’s approach to Israel is different from previous governments. Not only does Trump make his pro-Israel stance extremely visible, he also employs figures that are staunch supporters of Israel. In December 2017, Trump revealed his decision to recognize Jerusalem as the capital of Israel – a decision that was always avoided by previous U.S. presidents.

Confronting Iran is also an important factor for establishing such an alliance. The U.S. aims to unify regional actors in their policies towards Iran. For this reason, Washington has been supporting Saudi Arabia’s and the United Arab Emirates’ fight in Yemen against Iranian-backed Houthis. A similar situation can also be observed in the case of Syria. The Trump administration’s hostile stance against Iran is no secret and this attitude was emphasized in Washington’s decision to impose new sanctions on Tehran.

A third reason why the U.S. administration wants to establish such a regional coalition is the issue of security and natural resources. As one of the leading countries in the world in terms of oil reserves, Saudi Arabia is also the main defence industry importer of the U.S. Riyadh is also one of the largest foreign investors, which has billions of investments in the U.S. Therefore, Washington indirectly benefits from the wealth of Saudi Arabia – which is generated from the country’s natural resources. Having a close relationship with countries that have large energy resources gives the U.S. an advantage in competition with global actors.

The creation of a pro-U.S. alliance in the Middle East is of great importance for Washington’s rivalry with global actors such as Russia and China. It can be argued that one of the main motivations behind the U.S. strategy in the Middle East is to prevent the rising influence of Moscow and Beijing in the region. Therefore, it is important for the U.S. to contain Egypt, Saudi Arabia, and the UAE in order to ensure they do not fall under the influence of other international actors.

The U.S. administration also aims to prevent a possible regional alliance between these countries and Turkey – one of the main challengers of Washington’s policies in the Middle East. The U.S. and Turkey have been increasingly distancing themselves from each other, and their regional strategies have been in strong competition. As a result, the policies of Egypt, Saudi Arabia, and the UAE have been in parallel with those of the U.S.

In order to impose its new strategy in the Middle East, the Trump administration wants to keep the most important countries in the region under its control. The recent political moves of Egypt, Saudi Arabia, and the UAE reflect the fact that they are fully committed to a strong alliance with Washington. Most recently, while Muslim countries across the world condemned the decision, these countries showed minimal response to Trump’s decision to recognize Jerusalem as the capital of Israel.

Although it may seem that Washington’s strategy of building a pro-U.S. regional coalition is at work, there are obstacles for its success. While social and political actors defy this initiative and continue to display their discomfort with U.S. influence in the region, there is rising popular dissatisfaction with authoritarian regimes such as Egypt and Saudi Arabia. Therefore, it is still unknown as to whether this U.S. strategy of forming an Arab alliance in the region will produce a functioning outcome.