The G20 Summit: A Lack of Leadership and Purpose

Today, what we are seeing is the increasing irrelevance and greater provincialization of multilateral institutions that are supposed to provide comprehensive global solutions. This reality promises further uncertainty and instability around the world, which is already faced with challenges no single nation can solve on its own. 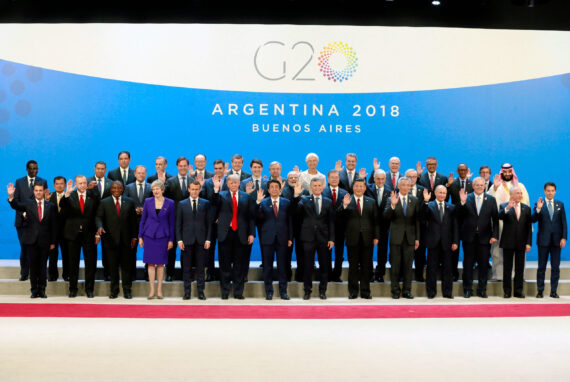 The G20 summit in Argentina ended with no major breakthrough or a breakdown but that is not good news for the pressing global challenges. From climate change to international terrorism and from civil wars to refugee crises, there are a host of issues that continue to spread instability throughout the planet. G20 was conceived of as an institution to bring together economically most capable nations to contribute to the resolution of international challenges outside the United Nations framework, which has long been hampered by the inaction of veto-wielding powers at the Security Council.

To be sure, the G20 was never meant to substitute the UN but it was nevertheless supposed to be more flexible and responsive to global problems hindering economic development and stability. The latest convening of the summit avoided any major political dramas but it has not produced much in the way of building a common framework on any of the major issues facing the community of nations.

The final communique of the G20 could not go beyond reaffirming the importance of the multilateral global trading system and had to exclude any criticism of “protectionism” or “unfair trade practices” due to the American and Chinese sensitivities.

All eyes were on President Trump as he finds himself being challenged at home by the Mueller investigation, which appears to be ending. He also has been the subject of heavy criticism for essentially siding with the Saudi administration in the Khashoggi affair in the name of protecting American interests. Further, Russia’s most recent aggressive actions in Ukraine have forced him to cancel a potential meeting with President Putin. His seemingly temporary truce with China was most likely motivated by the need to avoid yet another major political drama, which could have rattled the markets and cost him support domestically. Despite the fact that he appointed a hardliner to lead the trade negotiations going forward, this temporary halt to the trade wars provided him with some ammunition to sell it as a political victory to his constituency. Despite the multilateral nature of the G20 gathering, the biggest news the U.S. walked away with was still a bilateral one, very much fitting the President’s America First approach.

The U.S. was often the major force driving the big agenda items in these international gatherings but this time around nobody expected it in the first place due to the “America First” president in office. At the same time, here appeared to be no clear substitute for the U.S. leadership either. The major players seemed content with a reduced American role that is not interested in leading the conversation to resolve world’s big problems, economic or otherwise. The final communique could not go beyond reaffirming the importance of the multilateral global trading system and had to exclude any criticism of “protectionism” or “unfair trade practices” due to the American and Chinese sensitivities.

Many observers are just happy that a communique was even possible where the Trump administration has attacked multilateralist institutions established in the past under the U.S. leadership. The unwillingness of the U.S. to support the very principles of these very institutions undermines the effectiveness of G20, especially in the absence of another great power willing to underwrite these principles.

Today, what we are seeing is the increasing irrelevance and greater provincialization of multilateral institutions that are supposed to provide comprehensive global solutions.

While the U.N. has been dysfunctional largely due to the veto powers held by the Security Council member states, the G20 is now becoming ineffective as a result of its “natural leader” to refuse a robust leadership role with a global agenda. That is why, many regional and bilateral issues seemed to be more at the forefront during the summit. The gathering provided yet another opportunity for countries like Turkey to bring the regional issues to the agenda.

Turkey was vocal about the Khashoggi affair, calling on the international community once again to treat it as an affront to international norms. President Erdogan met with President Trump on the sidelines to discuss the status of northern Syria, which has critical national security implications for Turkey. In this sense, Turkey had a successful summit. Nevertheless, the summit underperformed considering the urgency and the seriousness of the global issues facing the planet although some might be content that it ended with a common declaration at the end.

Today, what we are seeing is the increasing irrelevance and greater provincialization of multilateral institutions that are supposed to provide comprehensive global solutions. This reality promises further uncertainty and instability around the world, which is already faced with challenges no single nation can solve on its own. When the most powerful G20 nations cannot unite around a common global agenda, it is becoming increasingly clear that the monumental challenges of the world will remain unattended at least for the time being.

Also Read
Is the Release of Pastor Brunson a Victory for the Trump Administration?