The Geneva Talks held in order to find a diplomatic solution to the Syria problem failed as expected and attention is now turned again towards the front where the violence had never stopped during the talks. 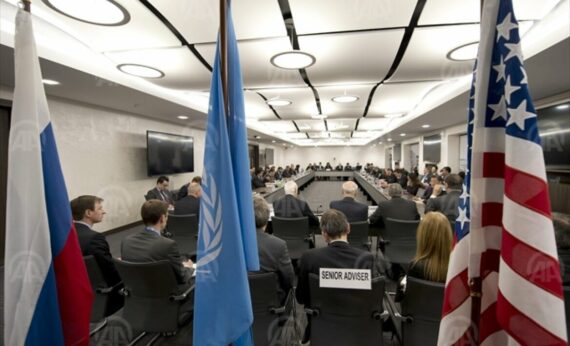 The Geneva Talks held in order to find a diplomatic solution to the Syria problem failed as expected and attention is now turned again towards the front where the violence had never stopped during the talks. The principle reason behind this failure was the unwillingness of the Russian-Iranian-Damascene axis to stop its offensive against the opposition and the disinclination these governments showed to diplomatic efforts to find a lasting solution to the crisis.

The military advancements that they lately achieved by their irresponsible aggression apparently convinced them of the possibility of a military victory on the front. Thus the Moscow-Tehran-Damascus axis chose to buy time in Geneva by coming with unacceptable conditions from the opposition’s viewpoint. The ambivalent attitudes shown by the international community and the resultant lack of a solid and homogeneous block to check their moves is the fundamental factor which encouraged them.

As the Syrian branch of PKK, PYD is openly conducting an armed struggle against Turkey and uses every means to create a civil war in the country.

While Moscow and Tehran are determined to keep the Assad regime intact and to restore Syria’s territorial integrity around the Baath regime at every humanitarian cost there is no similar determination in the opposition. Those parties which are assumably discontent with the policies pursued by Moscow and Tehran make anything but a uniform entity for they have different and conflicting visions regarding Syria’s future and ending the humanitarian crisis in the country. The fact that Turkey and its Western allies failed to agree on PYD’s position and on whether or not it would be invited to Geneva created a serious, if for a short while, and exemplified the complicated the situation on the “opposing front”.

As the Syrian branch of PKK, PYD is openly conducting an armed struggle against Turkey and uses every means to create a civil war in the country. Thus, the insistence of the US and other Western powers to see this terrorist organization as a viable “ally” is a major source of discontent in Ankara, the Turkish capital. Having been a long-standing ally of the West for 60 under the NATO framework Turkey finds it hard to understand why these countries, which explicitly recognized PKK as a terrorist organization, regard the PYD as their ally in Syria. Then, how should we understand the current situation?

First of all, we must answer why, at the cost of angering Turkey, these states particularly the US supports the PYD? Two explanations can be suggested for this. Firstly, lacking a holistic strategy about what to do in Syria, the US and others chose to fight against Daesh as the prime enemy and regarded the “secular” PYD as a reliable partner in this fight. This capacity of PYD was supposedly proven by its victories against Daesh. Finding the opposition fighting against the Assad regime too “Islamic”, the US is engaged in efforts to create an artificial armed group that is in line with its own interests as done previously in Afghanistan and Iraq. The problem is that by definition such a group lacks the societal basis necessary to direct the future of Syria and it is not in fact against the Assad regime. Yet Washington and others do not really seem to pay much attention to this. In the first instance PYD is expected to fulfil its responsibility in the fight against Daesh; and at a later stage, the intention is to use the presence of this armed group as a trump card to shape the future of Syria. For this reason, the US intends to keep control over PYD against the Damascene administration supported the Russia-Iran axis. However, having been aware of Washington’s plan, Moscow and Tehran have already started moves to grasp this force out of the US hands. This situation points to a soon-to-come US-Russia struggle over PYD. Time will show how the PYD gets affected by this struggle.

The second explanation regarding the US backing for the PYD could be its effort to check Turkey’s Middle East policy over PYD. Being uncomfortable by the policies followed by AK Party administration on Middle East without taking into account the interests of Washington and Brussels, these countries want to minimize Ankara’s role in the region by supporting PYD. As PYD gets stronger so does PKK and the control they establish over a large territory in Syria encouraged the latter to end the Peace Process with the Turkish state and to resume its terrorist activities. Trapped in such a complicated situation at home Turkey would have little incentive to properly pursue its Middle Eastern policies. Such a strategy of limiting the Turkish regional power and turning Ankara into an actor obedient to the Western policies carry the severe risks. President Erdogan’s reproval to the US by asking the Washing administration whether it is with Turkey or the terror organizations PYD and YPG shows the negative consequences of this policy on Turkey. The US needs to urgently decide whether it has chosen Turkey or the PKK/PYD as its ally and to stop its policy of trying to discipline Ankara by use of the PYD.

Considering PYD’s position within the framework of the Geneva talks and the latest developments in Syria, we see that the organization has placed itself against Daesh by reading the civil war conjecture within the country correctly, and that it has also set up its position on the Assad regime in a way that won’t be bothersome for either the US or Russia.

Whether Washington develops a holistic strategy for Syria will be a fundamental factor determining the path of the conflicts in the country. Finding a definitive solution to the Daesh terror is, for the Obama administration, a clear priority compared to preventing the Russian advancements in the region. Yet such a definitive solution can only be found once a holistic solution to the Syrian crisis is realized. Just as the airstrikes conducted against Daesh will not altogether bring an end to such terrorist organizations like it, the concentrated attacks by Russia, Iran, and the Assad regime which completely disregard civilian lives as well as the abandonment of remaining cities will lead to increased radicalism in Syria. This in turn will continue to supply convenient grounds for these types of organizations.

Having turned a blind eye on the Russian military and political advancement in the region and limited its Syrian strategy to the struggle against Daesh, the US structured a due diplomacy throughout the Geneva talks. In this frame, while attempting to include PYD in the talks, it has not demonstrated the necessary attitude against Russia and Iran in order to stop their attacks against the opposition and civilians while the talks were still continuing. While cities were being bombed on one hand, the talks produced no concrete achievements and ended in failure.

Considering PYD’s position within the framework of the Geneva talks and the latest developments in Syria, we see that the organization has placed itself against Daesh by reading the civil war conjecture within the country correctly, and that it has also set up its position on the Assad regime in a way that won’t be bothersome for either the US or Russia. It did not act against the Assad regime not to make Russia and Iran edgy, it does not openly support the Damascus administration in a way that would make the US uncomfortable. The US and other Western powers ignored the partnership of PYD with the Assad regime in certain cities. PYD is certainly following an extremely risky strategy. How long can it keep the autonomous regions it created by angering the Sunni Arabs and Turkey? When it kept between the American and Russian bid for power, which side will it choose?

Maybe these questions are still needs answers, but the historical experience shows that global actors easily switch the tools they use for their Middle Eastern policies. Thus the US or Russia, or any other state, can stop supporting PYD and take a hostile position. In this case, the PYD will have to face alone the regional actors it has disturbed. For this reason, the PYD needs to act with the awareness that non-regional actors such as the US and Russia will not be permanent in the Middle East, and that on the contrary, countries such as Turkey will continually have a role in shaping the region.

The Geneva talks showed that the Syrian civil war will continue for an uncertain period of time. After all, the ongoing attacks of the Russia-Iran-Assad block demonstrate the fact that these actors still insist on an offensively military method. Whether or not they will achieve their goal will be determined by the resistance of the opposition, the attitudes of the states which support them, and whether the passive policies of Western countries such as the US will continue or not. In the meantime there is, unfortunately, to reason to hope that the number of casualties and refugees will drop. Let’s hope the international community takes, in the nearest future, firm and determined attitude to stop the humanitarian crisis in Syria.