The HDP between Ethnic and Socialist Appeals

The upcoming elections, will show whether the HDP and PKK will be able to appeal to the Turkish socialists without distancing conservative Kurdish nationalists. 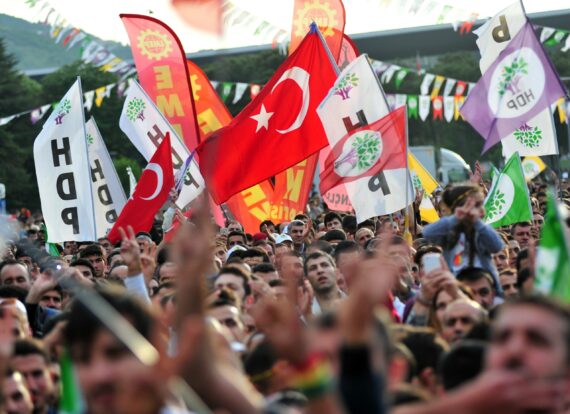 Supporters of the Peoples' Democratic Party (HDP) cheer as co-chair  Selahattin Demirtas addresses the crowd during an election rally in Osmangazi district of Bursa, Turkey on May 29, 2015. Anadolu Agency

Is the HDP an ethnic party, a socialist party, or both? Ethnic parties are defined as parties that prioritize “the interests of a particular ethnic group.” Such parties can have other items on their agenda but their focus stays on the interests of the ethnic group the party tries to appeal to. We can add some further attributes to ethnic parties. Such parties can nominate candidates belonging to different ethnic groups but the majority of their candidates tend to be from one single ethnic group. Finally, the respective ethnic group also makes up the majority of the party’s constituency. The HDP satisfies all three attributes and, hence, can be seen as an ethnic party. Nevertheless, it is not the party’s only attribute.

The HDP is also seen as a socialist party. The party shies away from such a self-identification in its electoral manifestos but implies it with its emphasis over “class struggle.” The party also tends to choose one of its co-leaders from socialist parties. The former co-leader Figen Yuksekdag was previously the leader of the Socialist Party of the Oppressed (ESP) and joined the HDP after a deal between the ESP and HDP. One of the current co-leaders, Sezai Temelli was also formerly active in another minor socialist party, the Freedom and Solidarity Party (ÖDP). Apart from its socialist discourse and its co-leaders representing minor socialist parties, the party also forms electoral coalitions with Turkey’s socialist parties. Most recently, six socialist organizations some of which are political parties, declared their support to the HDP. In return, the HDP nominated leading figures of these parties for the June parliamentary elections.

Nevertheless, the HDP’s ethnic and socialist characteristics are not balanced smoothly. As the party embraces a greater deal of socialist rhetoric, it distances conservative Kurdish nationalists from the party. As a final sign of this process, the HDP has formed an electoral coalition with minor socialist parties of Turkey but failed to do so with minor ethnic (Kurdish nationalist) parties. Since the PKK has a great deal of leverage and control over the HDP, it helps to follow what the PKK’s leadership thinks about this policy.

Mustafa Karasu, one of the PKK’s politburo members, has recently explained why the HDP does and should take this path. According to Karasu, the Turkish metropoles will help the HDP to be successful in the upcoming elections in June and, hence, the HDP needs the votes of the Turkish left more than the Kurdish nationalist votes, which are seen more or less granted anyway. In order to increase the HDP’s appeal to the Turkish left, the PKK is likely to avoid sending suicide bombers to Turkish metropoles during the one-month period before the elections and will follow a low-profile stance until the elections.

The HDP, on the other hand, is likely to propagate for “peace” and avoid making bold gestures for the PKK and its jailed leader Ocalan. Such a temporary shift worked well in the June elections of 2015 and is likely to be tried once again for June 2018 elections. Yet, the HDP’s flirt with Turkey’s leftist constituency is also pushing some conservative Kurdish nationalists away from the party. For instance, HDP’s Diyarbakir deputy Altan Tan left his party and will run for Saadet Party in the upcoming elections. He justified his choice by referring to the HDP’s decision to form an electoral coalition with the “marginal left” but refuse to do so with conservative Kurdish nationalist parties such as Hüda-Par. The upcoming elections, hence, will show whether the HDP and PKK will be able to appeal to the Turkish socialists without distancing conservative Kurdish nationalists.