The discourses of Islamophobic parties and politicians whose influence has been increased throughout Europe are effecting all European institutions, including judiciary bodies. 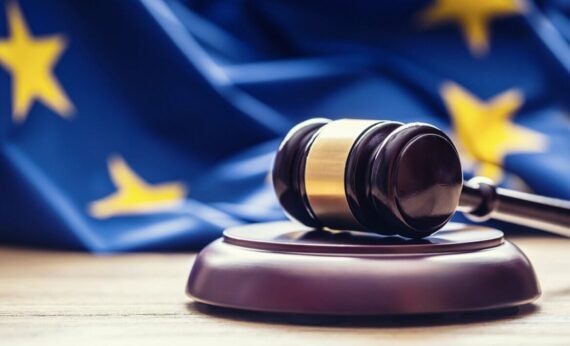 The discourses of Islamophobic parties and politicians whose influence has been increased throughout Europe are effecting all European institutions, including judiciary bodies.

Could you give some information about the European Court of Justice, which has taken the headscarf decision? What is its structure and task?

The European Court of Justice (ECJ) is the highest court in the European Union (EU). It is a three-tiered organization that consists of the Court of Justice, the General Court and courts of expertise. The main objective of the Court of Justice is to ensure the uniformity of the interpretation and implementation of the European Union law. The Court performs the functions of ensuring legal adherence to the interpretation and application of the Union law; harmonization of the national legal orders with the EU legal order; legal administration; commentary; conflict resolution; and legislation. The Court is also authorized to rule a few cases arising from the EU law. These are cases about lawsuits examining the member states and EU institutions’ compliance with the Union law; and interpretation of the EU law when it is necessary for the settlement of the cases in the national courts. The Court consists of one judge from each member state, the General Court consists of 28 judges, which comprises at least one judge from each member state. Judges hold office for a renewable term of six years with the consensus of the member state governments. The independence of the Judges of the Court is ensured by various provisions that regulate the status of the judges. The EU Court of Justice is seated in Luxembourg.

First of all, it must be noted that the Court of Justice is not a human rights court and it should not be confused with the European Court of Human Rights (ECHR). The ECHR is the international Court of courts established by the European Convention of Human Rights of which Turkey is a member whereas the ECHR is not a member of the EU. The Court, as mentioned above, is the highest court of the EU and its duty is not to safeguard human rights, but the interpretation and implementation of the EU law. For this reason, it should be mentioned that the decision that we will discuss was not a lawsuit directly related to and aiming to reverse a human rights violation, but it was related to the violation of the EU legislation that directly affects the right to freedom of religion. Therefore, we may argue that similar cases on this subject are likely to go to the ECHR in the future.

Earlier rulings on the banning of the headscarf by the ECHR were based on the reasoning that it could be prohibited for reasons, for example, when it is considered “a threat to public order”. However, we can say that recent political developments and the current political climate which has influenced the Court’s leanings on this issue are also valid for the ECHR, and that negative decisions giving way to the prohibition are likely to arise as a consequence of this disposition.

The complaint regarding the headscarf ruling was initially made by a Muslim woman named Samira Achbita, who resides in Belgium. Since 2003, Achbita had been working for the security firm G4S as a receptionist. She had been there for three years when she informed her employee that she would begin wearing the headscarf. Her employer has rejected the request by reasoning that wearing signs that symbolize and visualize political, philosophical, or religious views would be contrary to the principle of neutrality towards customers, and this is among the internal, unwritten rules of the company. Despite this ruling, Achbita informed her workplace that she intended to­ wear her headscarf to work. On the day following Achbita’s decision, a written prohibition on religious and philosophical symbols in the work place was added to the employee code of conduct. Achbita insisted on wearing her headscarf and consequently was dismissed from her position as she was acting in violation of the workplace regulation.

Samira Achbita initially filed a lawsuit in the Belgian courts, which reached the Belgian Court of Appeals. The Belgian Court of Cassation then applied to the European Court of Justice to see whether the ban on headscarves at work is in line with the EU’s 2000 Directive on equal treatment in employment and occupation. The case file and the dispute came before the Court. In other words, the Court review was not in regards of whether the prohibition was a violation of human rights and freedom of religion, but rather if it was in compliance with the EU Directive on equal treatment.

The Court ruled that the G4S security firm implemented a regulation of the workplace that did not discriminate based on religion or belief and that there was evidence to suggest that no specific discrimination was directed towards the person who filed the case and therefore it could not be ruled as a discrimination case under the EU Directive. In this particular case it was argued that there was no discrimination against a specific religion or worldview within the regulation which warranted an “indirect discrimination” case. In addition, it has been noted that it is legitimate for an employer to seek the protection of political, religious, and philosophical neutrality towards their employees and clients. It is emphasized that this rule is of particular importance for people who are in direct contact with customers.

As a result, the Court ruled that the prohibition of the wearing of visible signs of political, philosophical or religious beliefs by companies would not constitute discrimination and the prohibition with the aim of “dress neutrality” was not contrary to the EU Directive regarding the direct and indirect. Finally, the Court abstained from making a decision in a similar case in which a woman in France was also dismissed from her workplace, because in that particular case, the dismissal was due to a complaint of a customer.

What is your view on the basis of the religious symbols and the justifications of neutrality that the decision is based on?

First of all, this decision is based on the claim that the prohibition was not targeted towards a certain religious or belief group and was a general rearrangement. In the justification of the decision, there were the employer’s defense and general expressions such as religious, political and philosophical symbols. However, it is commonly known that this specifically targets Muslim women and affects those that wear the headscarf and that they are the target of these decisions. As a matter of fact, it’s not all people who wear religious symbols that are affected by this decision but mostly those who are of the Muslim faith. The decision disregards the fact that headscarf was wore with the belief that it is a mandatory requirement of Islam. Furthermore headscarf is regarded as an instrument people use to reflect their faith.

Additionally, the Court ruling regards not wearing a headscarf as “normal/essential/actual”, implies that wearing a head covering is not and that represents impartiality. Thus, the court acted with the prejudice that wearing a headscarf symbolizes a religious affiliation and automatically is contrary to any type of neutrality. This recalls the headscarf discussion that takes place in Turkey time to time, in which the headscarf has been a contested symbol in the public workplace and that this symbol gives the impression that they are in opposition to those they serve.

It must be mentioned here that the headscarf decision is not based solely on legal grounds but has been influenced by the rising overall political atmosphere in Europe. The increased influence of the far right, the Islamophobic and anti-Turkish parties and politicians did not only affect other politicians and governments but also took hold of all of Europe’s institutions as well as its judiciary. This is a political decision that has technical legal aspects.

What are the consequences for European Muslims and Turks in the future?

As I mentioned previously, this decision is not a unique one but a part of politics that began to dominate Europe in a number of areas. Indeed, the Vienna based European Union Agency for Fundamental Rights (FRA), welcomed the Court’s decision by stating that it was in line with the principles of equal treatment. It certainly would not be at all surprising if we see similar decisions made by various different courts and institutions and that this practice becomes widespread across Europe. We see the statements from different countries supporting the decision. Needless to say, contrary to values such as multiculturalism, human rights, and democracy that Europe has demanded for years and is still demanding from candidate countries such as Turkey, it is very likely that Islamophobia and anti-Turkish sentiment will continue in Europe and make living conditions for Muslims much more difficult.