The Hysteria of Cultural Racism

The French Muslims are afraid right now. Politicians, intellectuals, and the media are incessantly speaking on them. This phenomenon is unfortunately an epitome of cultural racism. Of course, many French people are ashamed of this, but their voices are muffled amid the chaos. 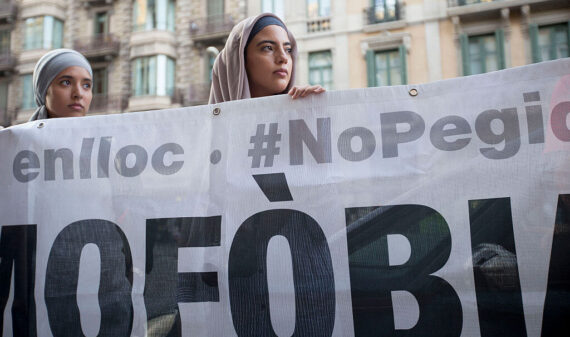 Members of Unity Against Racism and the muslim community, demonstrate in front of french consulate agaisnt islamophobia and the France's burkini ban on Barcelona in September 1, 2016. Getty Images

In the present day, it is hard to believe in scientific racism. It is not so easy to support such theories as was done so in the past. According to a case study conducted 5 years ago by the Science Po European Studies Center based in France, only 8% of the French public believe in White supremacy. Also, unlike the past, present day intellectuals and politicians do not sell the idea of a “civilizing mission,” which is nothing but colonization. There is a saying that everything has a cure except for death, and today, instead of anachronistic scientific racism, a modern version of racism that has the potential to be backed by almost the entire political spectrum is on the rise.

This modern day racism is called “cultural racism,” which is based on marginalizing groups and cultures that are different from the dominant culture. Some call this “new racism,” but even during the time of scientific racism, it was prevalent to suggest getting to know other groups and civilizing them through indoctrination, which has been a practical view since it’s easy to build a rhetoric through that. This approach does not directly classify the other as superior or inferior, but they assault alternative lifestyles encountered in society with slogans such as, “This land is ours, so our values operate here.” The National Front embraces the slogan, “France belongs to the French,” whereas a number of right and left-wing groups contend that others should only be entitled to citizenship as long as they are assimilated to the dominant culture.

Instead of anachronistic scientific racism, a modern version of racism is on the rise. It is called “cultural racism,” which is based on marginalizing groups and cultures that are different from the dominant culture.

Today, the main target of such attacks are not the Jewish people, like they were some 70 years ago. Weighed on by the shame of the Holocaust, the West is now using all means to appeal to the Jewish community. Former French Prime Minister Manuel Valls, who is known as an Islamophobe, even wore a kippah to create a positive impression among the Jewish people. On the other hand, the cultural racism against Muslims and the discrimination related to this are condoned. On top of that, Islamophobia is utterly visible in upper classes, especially among state authorities and intellectuals. They restrict the freedom of Muslims with verbal or written declarations or practices that are adorned with rhetoric depending on the context, let it be secularism, gender equality, or republican values. Since men are not obliged to wear the hijab in Islam, Muslim women constitute the first targeted group.

Two years ago, women wearing burkinis were arrested on a beach in France. In another incident, two ministers stated that they were shocked when they saw a young women, who was a student’s union leader, wear a hijab. Another original manifestation of this authoritarian gaze into Muslims has occurred lately. The state went on a rampage for a sports hijab launched by a retailer. When Decathlon attempted to launch the hijab produced for Moroccan women in French sports, they faced a tremendous reaction and therefore decided to discontinue the product.

The company’s statement read: “Our store teams have been insulted and threatened, sometimes physically. Since this morning, we have been facing an unprecedented wave of insults.” More gravely, this fear was not fueled by Marine Le Pen or her party’s militants. Aurore Bergé, the spokesperson of President Emmanuel Macron’s Party La République En Marche(!), was among the first names showing reaction to the product. Stating that the brand must be boycotted, Bergé said: “My choice as a woman and citizen will be to no longer trust a brand which breaks with our values,” adding that they are accused of racism and Islamophobia when they express their opinions, as in the burkini case.

Those siding with Bergé fanned the flames by saying that this cannot be racism since there is no race born with hijab! Socialist Party Parliamentary Group Chair Valerie Rabault also called for a boycott against the brand, while the French Minister of State for gender equality Marlène Schiappa said that the product is a promotion of political Islam and proves that religion controls everything. The Republican spokesperson Lydia Guirous claimed that the brand submits to the type of Islamism that ensures women’s submission, while some parliament members said that the sports hijab is a promoter of sexual apartheid.

It wasn’t Marine Le Pen or her party’s militants that fueled fear in Decathlon after the company launched a sports hijab. Rather, it was individuals such as Aurore Bergé, the spokesperson of President Emmanuel Macron’s Party La République En Marche(!)

The articles and statements of every politician that begins with the words “our values” imply that their civilization and values are absolute and superior, so the other has to submit to them. They shout: “We do not want to see you in any sphere of life, including education, professional life, sports and arts. We do not even want to see you at the gates of schools as parents waiting for their children. You should be afraid.” The French Muslims are afraid right now. Politicians, intellectuals, and the media are incessantly speaking on them. This phenomenon is unfortunately an epitome of cultural racism. Of course, many French people are ashamed of this, but their voices are muffled amid the chaos.