The Identity Crisis of the Iyi Party

Reducing the Iyi party's ideological baggage to such an extent that can lead to the creation of further conflict zones could result to a “split within a split” during the 2019 elections. 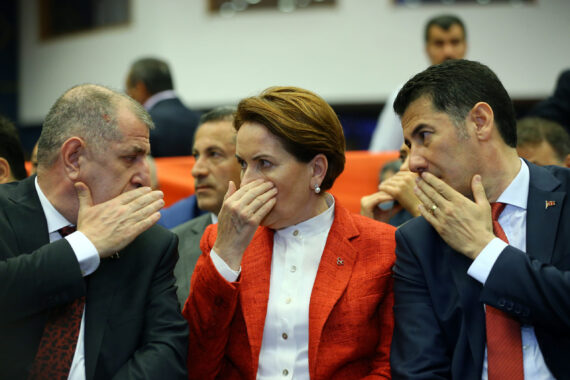 Following the power struggle within the Nationalist Movement Party (MHP), the Iyi Party was established on October 25, 2017, almost five months ago. During the establishment process of the party, it was stated that the party would bring a new understanding to Turkish political life instead of being a continuation of the MHP. The leading figures in the party, who also define themselves as nationalists, stated that the party would embrace people coming from various circles and not only nationalists, in accordance with its catch-all party characteristic.

According to Meral Aksener, the leader of the party, besides the former MHP members, the right-wing voters and moderate leftists alienated by existing party politics would gather under the roof of Iyi Party. However, the last five months have illustrated that the party is far away from its target point and suffers from an identity crisis, which was rooted in the establishment process of the party and its aftermath.

First signs of the identity crisis were seen when the name of the party, the program, and the legislation were announced. Even if the party claimed to become Turkey’s largest catch-all party, it was seen from the names on the Founders Committee that most of the founding members had been involved in political affairs on the nationalist and centre-right lines in the past. Thus, one of the first criticisms was that the new founded political party was dominated by symbols of nationalist thought, from the names in the Founders Committee to the leadership cadre and the party program, despite its claim to be a catch-all party.

The nationalist discourse in the party’s program also strengthened these criticisms that the program states that “politics will be created over values and nationalism will be moved to cultural and economic areas.” Similarly, the whole program was dominated by nationalist discourse and far away from bringing connecting issues in society into the forefront more than dividing ones to get support from various circles.

Another striking issue related to the identity crisis was the dominance of populism and pragmatism in the party discourse without having a flexible ideological stance. The party program included objectives such as entering into the top 10 economies of the world and increasing national income, making a democratic political party law, being among the first twenty countries in the PISA order, reducing the unemployment rate below 7% at the end of five year and realizing industry 4.0 revolution in technology. The most striking among these goals was the promise of returning to the parliamentary system with a constitutional amendment within a year. All of these promises show the populist side of the party, which, indeed, contradicts the nationalistic discourse.

Even if the party’s leader and cadres still insist that the party does not define itself on nationalism, the contradiction of values and acts caused intra-party conflicts which resulted in the resignation of some prominent founding members – the last one of whom was the vice chairman of the party. While other parties in the system were blamed for not representing the general will, the biggest failure of the Iyi Party has been so far to define itself with the old terminology of party politics. The problematic nationalist-populist discourse utilized without a clear-cut definition brought the party to a deadlock. Reducing the party’s ideological baggage to such an extent that can lead to the creation of further conflict zones could result to a “split within a split” during the 2019 elections.