The African proverb goes to say that when two elephants wrestle, it is only the grass on which the wrestle taking place will be harmed. Iraq looks like it has become the grass affected by the two fighting elephants: Iran and the U.S. Turkey should support Abadi or Sadr in order to form a coalition government as only a moderate Shiite group could help prevent a civil war. 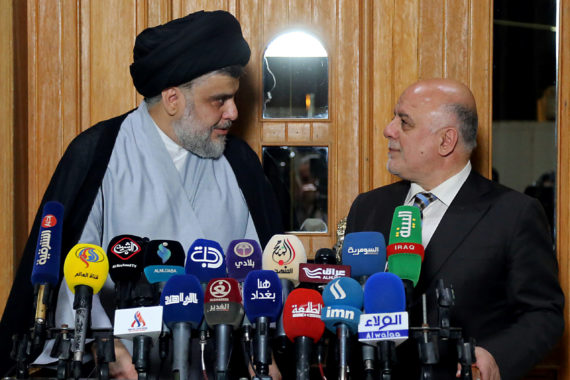 Since the announcement of the inconclusive national election results, events in Iraq have been sliding towards a civil war. In addition to this, the U.S. and Iran race for influence and hegemony in the country has speeded up the deterioration of conditions in Iraq. This piece seeks to discuss the latest developments regarding this issue in the light of the decision of the Iraqi parliament, which was issued on June 6, and which called for the sorting and manual re-count of all votes and the abolition of thousands of ballot boxes. This matter puts Iraq into a path of uncertainty during a very critical period.

The political situation has become a bottleneck that may be difficult to get out of, and it is being followed with series of destabilizing events. Unless these issues are being checked upon, Iraq will witness a civil war in a manner very similar to what is going on in Syria and Yemen. An Iraqi political analyst, writing for the daily Baghdad Post (May 23, 2018), stated that: “Iran ignites fire of “civil war” in Iraq… Iran is trying through Qassem Soleimani’s efforts, which is in Iraq now, to ruin all efforts to form a government that would not be totally loyal to her…”

Nouri al-Maliki, ex-premier and the leader of the State of Law election bloc, has joined with Hadi al-Amir’s Naser bloc in a single sectarian bloc, and has declared their hostility to the Moqatada Sadr bloc, which won the most seats in the recent election. The Sadrist project, which has been viewed by many as an Iraqi project, stands against the pro-Iranian Maliki project. The former wants to disband and demobilize the Shiite militia, known as Hashed, improve relations with Iraq’s Arab neighbors, and wants to take a neutral stand in the ongoing U.S. and Iranian rivalry in the Middle East.

Iranians have been involved in many political games such as eliciting dozens of deputies in the coalition of Naser, led by Prime Minister Haidar Abadi, in order to join pro-Iranian political blocs. According to some sources in Baghdad, the pro-Iranian circles have recently inaugurated a series of assassinations in Baghdad in order to fuel the fire of civil war. The explosion in Sadr City, which killed and wounded tens of people in Baghdad on the night of June 7, and the subsequent burning of the election ballot boxes housed in the Independent Electoral High Commission storage in Baghdad are designs of the people that want to push the Sadr group into retaliation and want to create a political rapture in Iraq. If history is any guide to us, Mr. Sadr will not be silent on all these events, even if this requires a full-fledged civil war.

It is noteworthy that al-Maliki made numerous statements in the week leading to the election in which he threatened with civil war if the election results were rigged. Many believe that this was an expression of prior knowledge on his part that he will lose the elections. Those threats “are not new to him, especially since his record is full of manipulating sectarian violence during the past years. It is not unlikely for him to re-start it again, if the course of the events were to his dislike,” wrote an expert on Iraq affairs. After the elections, al-Maliki repeated the same threat through the statement made by an MP from his bloc – Mohamed Sahiod – who told the press on May 17 that, “We demand the abolition of the election results and the extension of the work of parliament and to make the current government of Abadi a Caretaker Government due to the wide scale of fraud which took place in the electoral process.”

Iraq’s parliament passed a law on June 6 ordering a nationwide manual recount of votes in the May 12 parliamentary elections. This was a day after the prime minister had stated that there had been serious violations. This move could hinder the delicate process of forming a new government and raising the prospect of further uncertainty in Iraq. This law has also added further fuel to the fire of crisis and was received with mixed and opposing statements. It appears that Abadi’s bloc, which trailed in third place, has some information suggesting that a manual recount will increase their seats.

The pro-Iranian camp wanted the parliament to go further than by just declaring the election results null and void in order to deny Sadr any opportunity to form the government. The National Coalition of Iyad Allawi, which did not perform well either, has also supported the idea of re-holding the election. Allawi stated that, “the declared results of the elections, as it stands now and without taking into consideration numerous appeals against abuse and large-scale fraud, especially after the United Nations confirmed the existence of fraud and manipulation of votes, will lead to producing a parliament challenged by its legitimacy and an illegitimate government.

Hassan Jihad, a leader in the Coalition of Justice and Democracy in Northern Iraq (Kurdistan), led by Barham Sali, said on June 7 that the decisions of the parliament on the elections restored confidence in the elections and institutions: “The re-counting and manual counting and the application of recent measures will change the number of seats and the results of opposition parties.” He added that, “the ruling parties in the KRG should accept the fact that recounting electoral votes will change the number of seats and it should respect the domestic experience.”

The new election has suspended the work of the Independent Electoral Commission and authorized a Commission made of nine judges to carry out the re-count of votes throughout Iraq. Should this law be applied, it may lead to a series of new crises and complicate the political situation in Iraq in order to reach a state of suffocation. On June 21, the Supreme Court passed a decree, which approved the June 6 law passed by the Iraqi Parliament regarding the manual recount of votes in Iraq as constitutional. This will halt all attempts to form the government and will open hell’s door and further complicate the situation.

It appears that the “biggest beneficiaries of this process are parliamentarian Salim al-Jubouri and the government of Haider al-Abadi.” Al-Jubouri, who failed to regain his seat, believes that he has been done a great deal of injustice in this election. Hassan Turan, a Turkmen MP, was quoted stating, “The high attendance rate during the parliamentary session confirmed beyond doubt that all political blocs, including the winner, wants to distance themselves from the forgers.”

While it may seem that both Iran and the U.S. are distancing themselves from all these rapid transformations that are taking place in Iraq, behind the scenes both governments are moving all the threads of the game. It is noteworthy that both governments have welcomed the results of the election declared by electronic counting. However, it seems that the frantic frenzy behind the scene of both the U.S. and Iran is to influence the process of government formation.

It could be stated that the election results are only a symptom of a larger crisis. The 2003 Iraq invasion not only destroyed the existing state machinery but failed to replace it with a sound and effective one. As the Iraqi Vice President Ayad Allawi told The National during his visit to Dubai on April 9: “Elections will not solve the crises Iraq faces unless it maintains an inclusive political process, overcomes sectarian divisions and rids itself of foreign interference.

The African proverb goes to say that when two elephants wrestle, it is only the grass on which the wrestle taking place will be harmed. Iraq looks like it has become the grass affected by the two fighting elephants: Iran and the U.S. Turkey should support Abadi or Sadr in order to form a coalition government as only a moderate Shiite group could help prevent a civil war. As with the Syrian Civil War, a civil war in Iraq will have adverse effects on Turkey.