Insisting that the referendum has done nothing but harmed KRG relations with the region and increased the likelihood of safe-zones for terrorist organizations including the PKK, YPG and Daesh, Erdogan emphasized that “The referendum crisis in northern Iraq is a new attempt to strike he heart of our region with a dagger.” 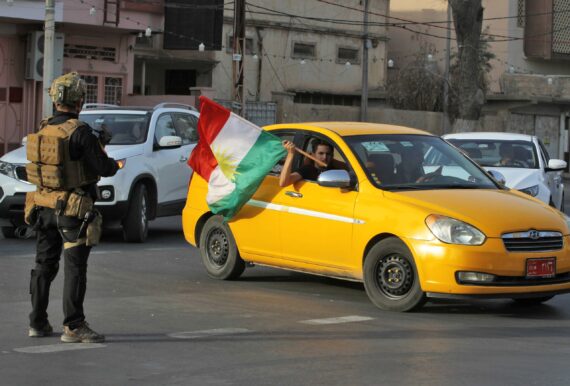 Members of SWAT (Special Weapons and Tactics) security forces, affiliated to the Iraqi Interior Ministry, keep watch as they deploy on the streets after a curfew was imposed on the disputed northern city of Kirkuk, during the vote on the Kurdish independence on September 25, 2017. AFP

Following the independence referendum that took place on September 25 in KRG-held areas, relations between the Erbil and Baghdad administrations have reached their ever-lowest point.

While receiving no international support, except from Israel, according to the results announced by the KRG, almost 93 percent of registered voters cast ballots in favor of independence.

Following the referendum many diplomatic, economic and military measures have been taken by Baghdad, Ankara and Tehran.

Al-Abadi said: “I warn of the actions of the region’s military mobilization in Kirkuk, it is dangerous… The imposition of a status quo by force over the disputed areas is unacceptable.”

More, Al-Abadi called for a joint administration between the Iraqi government and the KRG over the disputed areas in Kirkuk under the leadership of the federal government in Baghdad, without giving further details on how this would work.

In addition to Al-Abadi’s comments and suggestions, on Tuesday the Iraqi Parliament adopted a bill that would force Baghdad to halt all financial transactions with the KRG.

The bill – which is now legally binding – was submitted by the Parliament’s financial committee.

While a large number of Iraqi-Kurdish lawmakers failed to attend the parliamentary session, the legislation was approved by a majority of assembly members.

Another decision the Parliament made concerns the Iraqi Kurdish MPs that voted in the illegitimate referendum.

During a press conference, Parliamentary Speaker Salim al-Jabouri requested the assembly’s legal committee to reveal the names of all Iraqi Kurdish MPs who cast ballots in the referendum.

According to al-Jabouri, lawmakers who took part in the illegitimate referendum will be referred to Iraq’s Federal Court, which will initiate legal proceedings against them if they were found to have violated Iraq’s constitution by casting ballots.

Al-Jabouri stated that “The Iraqi state is undergoing the greatest crisis in its history, which threatens the country’s unity and social fabric. Parliament is obliged to adhere to the Constitution and decisions issued [on the referendum].”

According to a statement issued by Jordan’s Royal Court, during a phone call with Haider Al-Abadi Abdullah stressed Jordan’s full support for the Iraqi government’s efforts in counterterrorism and launching a political process aimed at including all components of the Iraqi people, with a view to contributing to a secure, stable and unified Iraq.

Not too late for KRG to normalize relations

In echoing comments made by the governments of Turkey, Iran, U.S., and many western Europe states, Turkish opposition MHP leader Devlet Bahceli emphasized the importance of the territorial integrity of Iraq for the security of the wider region.

Claiming that the territorial integrity of Iraq is “indispensable for Turkey,” Bahceli called for the KRG President to give up his “ambition for independence.”

Post-referendum Iraq also maintained its place on the agenda of the President, as Recep Tayyip Erdogan stated that “Any incident taking place in Syria and Iraq is not independent from us, they are linked directly to our domestic affairs.”

Insisting that the referendum has done nothing but harmed KRG relations with the region and increased the likelihood of safe-zones for terrorist organizations including the PKK, YPG and Daesh, Erdogan emphasized that “The referendum crisis in northern Iraq is a new attempt to strike he heart of our region with a dagger.”

Calls for negotiations between Baghdad and Erbil have been raised from different countries across the region, and within this concern, Turkish Foreign Minister Mevlut Cavusoglu claimed that it is “not too late” for the KRG to “step back.”

Re-instating that the referendum was “neither democratic, nor legal,” Cavusoglu expressed confidence in return to normal relations with the KRG if they correct the “mistake” they made.

The Minister stated, “It is not too late yet. The Barzani administration could take a step back. If the KRG corrects its mistake, then we can continue with our relations just as we did before the referendum took place.”