The Legacy of the July 15 Coup Attempt for Turkish Democracy

We will certainly continue to debate the reverberations of the July 15 coup attempt and its legacy for the country. But one overarching message is clear: Turkish people will no longer tolerate their democratic rights and popular will to be undermined and hijacked by cliques and terror groups from within and outside the state. 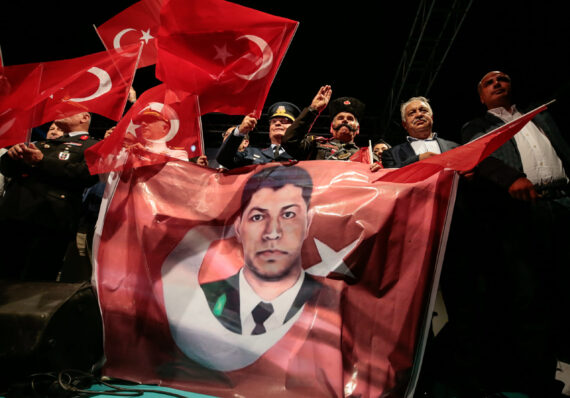 People gather at Konak Square during the July 15 Democracy and National Unity Day's events to mark July 15 defeated coup's 2nd anniversary, in Izmir, Turkey on July 15, 2018. Pictured on the flag is Omer Halisdemir - a commander within the special forces - who was killed after shooting dead military coup leader Semih Terzi. Anadolu Agency

Within two years since the July 15 coup attempt, Turkey has overcome several monumental challenges. The first and foremost challenge was the coup attempt which was thwarted in its tracks by civilian initiative thus setting the path for future challenges. The coup attempt was undertaken by an illegal organization, FETO, which tried to usurp power from within the state bureaucracy. Members of this organization had systematically infiltrated state institutions for decades while keeping up a façade of merely being a civil society organization.

Turkish people took to streets upon President Erdogan’s call to confront the putschists and protect their democracy. Countless stories from that night have been recounted all illustrating that Turkish people will no longer tolerate anti-democratic forces to dictate their will. It was clear from the onset of the night of the July 15 coup attempt that the era of coups in Turkey was drawing to an end. Unlike previous military interventions, Turkish people’s resistance that night signaled a major turning point in the history of Turkish democracy.

The second challenge was to tackle an unequaled terror organization which had taken over many strategic institutions, subsequently permeating its grip on power through anti-democratic means. Turkey was already dealing with domestic and regional terror organizations like the PKK and DAESH. Confronting FETO, however, demanded a unique approach as this organization existed within the state itself. Turkey had to comb through the state bureaucracy to find out members of a highly secretive organization who received orders from outside rather than from their legitimate superiors in the bureaucratic hierarchy. Especially in the weeks and months immediately following the coup attempt, there was imminent fear of the potential of another coup attempt transpiring any moment. The recent trauma of the night of July 15 was compounded with the urgent need to find out the perpetrators and prevent yet another attempt.

The third challenge was to establish a multi-pronged approach to combat domestic and regional terrorism. Both DAESH and the YPG, the Syrian branch of the PKK, were posing immediate security threats especially along the Syrian border. Towns bordering Turkey were often subjected to rocket attacks and occasional destabilizing activities such as smuggling. Lack of stability on the Syrian side of the border created opportunities for the YPG, which was increasingly legitimized and encouraged by western support. Only a month after the coup attempt, Turkey decided to take the fight across the border into Syria both to demonstrate its resolve and to ensure that it would not simply sit by and watch the PKK gain ground. To this end, Turkey conducted the Euphrates Shield and Afrin operations in addition to maintaining a military presence in Idlib. Through its military intervention in northern Syria, Turkey’s fight against terrorism evolved from a defensive state to a new proactive approach after the coup attempt by fighting terror organizations across the border when necessary.

The fourth challenge was a political one: to rebuild the political system that suffered from decades of military and civilian tutelage system. The traditional tutelary system prevented the popular will from being fully reflected in the political arena and various state institutions had the ultimate say in state affairs. The AK Party years have challenged this system in a significant way and yet a comprehensive change to the system, which was demanded by people of all segments of the society, had still to be realized. The 2017 referendum on the transition to a presidential system represented the most significant overhaul of the governance system in Turkey. With the June 24 elections, Turkey has now transitioned to a full presidential system whereby the state institutions originally set up to oversee the civilian governments are now going to serve under the elected leaders. It will take time for the new system to be fully functional and there may even be hurdles along the way. Nevertheless, an elected president and an elected parliament are now at the center of the political system with the unelected and appointed civil and military bureaucratic institutions serving under them.

We will certainly continue to debate the reverberations of the July 15 coup attempt and its legacy for the country. But one overarching message is clear: Turkish people will no longer tolerate their democratic rights and popular will to be undermined and hijacked by cliques and terror groups from within and outside the state. This will most likely constitute the cornerstone of the country’s democratic maturity in the years ahead.