Haftar's entry to Tripoli and seizure of the administration via weapons will create an environment where extremist and radical groups will expand their area of influence in Libya and North Africa. 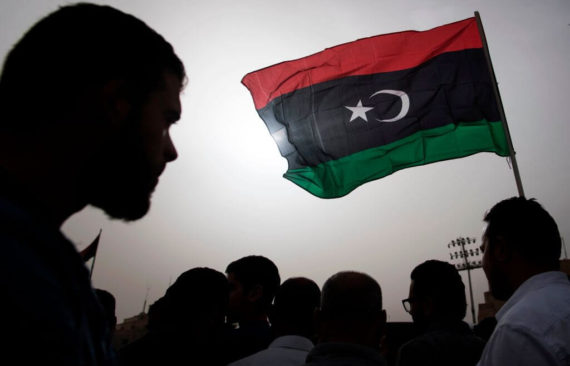 Libyans gather during the funeral of fighters loyal to the Government of National Accord (GNA) in the capital Tripoli, on April 24, 2019, after they were reportedly killed during clashes with forces loyal to strongman Khalifa Haftar in al-Hira region, about 70 kilometres south of Tripoli. Getty Images

Contrary to the U.S.-Israel-UAE axis, Turkey and some other global actors have sided with the Presidential Council of Libya and the Government of National Accord by staying true to the Libyan Political Agreement (LPA) and the Rome Conference against the attack of warlord Khalifa Haftar on Tripoli. In his speech on April 27, Turkish President Recep Tayyip Erdogan stated, “There exists a government in Libya that derives its legitimacy from the people of Libya, and there is a dictator who is supported by certain Arab states. We will employ all of our capabilities to make sure that the ones who wish to turn Libya into another Syria will fail at their attempts.”

President Erdogan’s stance is a reflection of the Libya Political Agreement, which was created as a result of the conference held in Skhirat, Morocco in late 2015 and the global consensus that was achieved regarding the LPA following the Rome Conference. While Turkey continues to position itself within the limits of the legitimacy created according to the framework of this international consensus, some global actors such as the U.S. and France and certain regional actors such as the UAE and Egypt have changed their positions contrary to their promises made in 2015. The reason these actors have changed their positions is not that the accord is one that cannot be implemented. On the contrary, the implementation of this accord was blocked by Haftar, who is supported by the aforementioned axis. The power to undermine the LPA was given to Haftar by the UAE. Furthermore, Haftar was also protected by Israel and the Trump government and turned into a political actor by the UN. In other words, the Israel-UAE axis operating under the protection of the U.S. undermined the 2015 accord, and UN legitimized the events that occurred.

The Israel-UAE axis operating under the protection of the U.S. undermined the Libya Political Agreement, which was created upon a global consensus.

Turkey, within the framework of the accord that was reached in late 2015, made the decision to stay on the side of the legitimate actors in Libya. This is because Turkey sees a policy-making approach that is in cooperation with the people and a political system where reasonable decision-making processes are conducted as being essential to the stability of the region. Turkey recognizes that countries governed under the tutelage of military and bureaucratic elite will be rendered unstable and underdeveloped.

At a time where the United States is turning the world into a more chaotic place where only power has meaning through actively undermining international law, as can be seen from the examples of Egypt and Venezuela, Turkey is trying to minimize the damage caused by this chaos on the region. Due to being a country in the region, Turkey is directly affected by any instability and chaos occurring in the region. The reason Turkey is strongly supporting the legitimate actors in Libya to such a degree is its strategic reading centered around stability concerning the region and reasonable political vision.

Haftar’s entry to Tripoli and seizure of the administration via weapons will create an environment where extremist and radical groups will expand their area of influence in Libya and North Africa. It will bar Libya from having a rational political system that makes it possible for the country to benefit from global advancements for the next twenty years. And it will turn Libya into a country under dictatorship that has no say in its region. The administration of Libya by a civilian authority is the only alternative that will remove these possibilities. Currently, the civilian administration and the political accord are represented by the Presidential Council and the Government of National Accord.

The world is now silent for Libya and waiting for a warlord, Khalifa Haftar, to enter Tripoli.

And despite this, the world is now silent and waiting for a warlord to enter Tripoli. What makes Haftar’s attack on Tripoli even more tragic is that the attack began while the Secretary-General of the UN Antonio Guterres was visiting Haftar with the purpose of achieving a “political solution,” despite Haftar having no legitimacy in Libya according to all parameters and measures of legitimacy. Facing this latest attack of Haftar put the UN Secretary General into a difficult position and foiled all solution attempts of the UN regarding Libya. The UN Libya Mission fell into silence and failed to react in any way except a weak statement that came three weeks after the attack. The U.S. and Russia blocked the United Nations Security Council in favor of Haftar, France sided with Haftar, and as a result, the Government of National Accord suspended all security co-operations with France. While the international community is providing Haftar with diplomatic protection, the UAE is providing Haftar with all kinds of logistical support, and despite one month having passed Haftar is still waiting at the gates of Tripoli, before the eyes of the entire world.

The reason behind the silence of the world is the activities conducted by the Israel-UAE lobby under the protection of the Trump administration to shape the region. This axis had an active role in the coup process that occurred in Egypt in 2013, in the descent of Tunisia into political crisis following 2013, in the deep chaos that ensued in Yemen following 2015 and in the Syrian crisis becoming impossible to solve. The crisis in Libya today is a part of the strategy of this axis concerning the region. Haftar drew the attention of the Libyan public by attempting a coup in May 2014 and is an actor who has been propped up by this axis in Libya since early 2014. Haftar, who has absolutely no legitimacy according to the Libyan Political Agreement that was signed in late 2015, which is also supported by all international actors in the Rome Conference, conducted military operations in Benghazi in the years of 2016 and 2017, made illegal military gains in the south in 2018, and despite these was not criticized by actors supporting the LPA or the UN. On the contrary, by being declared a “de facto actor,” he was gradually given a political presence. Since this axis is not directly affected by instability, political dysfunctionality, the presence of authoritarian, totalitarian and dictatorial regimes and isolationism in the region, they ignore the negative consequences of their strategic efforts.

It was obvious that Haftar intended to march on Tripoli when he was conducting military operations in Fezzan in early 2019, but the institutions in Tripoli failed to take the necessary precautions due to the guarantees of certain international actors such as the U.S. and the UN Libya Mission to the effect that “Tripoli is our red line, and we will not allow Haftar to enter it.” But when Haftar was attacking Tripoli on April 4, he was visited by the UN General Secretary, and despite one month having passed after the attacks, the UN Libya Mission is yet to give a clear statement. Moreover, U.S. President Trump has spoken with Haftar on the phone and the U.S. used its vetoing power in the UNSC in favor of Haftar, meaning that despite the guarantees these actors have given, they positioned themselves in favor of Haftar. Since this situation undermines international law and the existing accord, it cannot be explained on rational grounds. Thus, we can say that the Israel-UAE axis under the protection of the U.S. is intending to deliver Libya to Haftar.

Haftar presented himself as the guarantor of security, but he has been the main actor behind instability.

Against this, the legitimate powers that exist in the east of the country under the leadership of the Presidential Council and the Government of National Accord, which were created within the framework of the LPA and recognized by the UN, have established a strong line of defense. This line of defense has rendered all of Haftar’s claims baseless. Because Haftar had claimed that he would enter Tripoli in 72 hours, but has yet to achieve any meaningful advancement despite one month having passed. Haftar presented himself as the strongest military figure in the country, but his military might have been revealed as inadequate and it was seen that the majority of the military followed the legitimate forces in Tripoli. While he claimed that the people of Tripoli and the West were waiting for him, especially in Tripoli and Misrata people declared him a “puppet of the UAE.” He presented himself as the guarantor of security, but was revealed as the main actor of the deepening crisis and instability in the region.

Haftar, who is a result of the Israel-UAE axis, continues to attack Tripoli, and the crisis in Libya is still ongoing. Three main scenarios can be predicted regarding the future of the crisis. In the first scenario, if the parties cannot advance and if a formula that includes Haftar is created after a negotiation process, Haftar will continue to play the role he has played in the last five years using the opportunities given to him by such a formula. In the second scenario, in preparation of a significant operation with the support of the U.S., France, Russia and the UAE, Haftar will enter Tripoli as a result of this operation, be applauded by the world and repeat what happened in Egypt in Libya. In the third scenario, the legitimate forces in Tripoli will repel Haftar from the West and begin to advance to the east. In this situation the UN, which has until now failed to comprehend that its mission in Libya is to ensure peace and stability, will become involved to “ensure peace and security in Libya” with the direction of the countries siding with Haftar, and will save Haftar from being completely defeated.