For older, experienced EU hacks, such as the author, there were no great surprises to the loaded gun which Brussels handed Britain – a deal which would surely have made its population worse off and an example to the rest of the EU who might have contemplated leaving – and the fake EU accession process for Turkey. 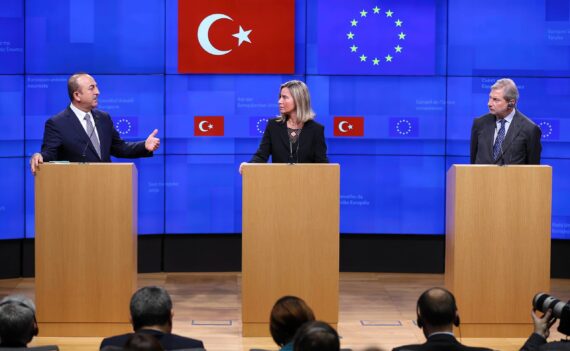 Turks must have been following the beleaguered negotiations between the EU and the UK for the last two years with some interest. Ultimately, even those in the UK who voted to remain in the EU have had to admit that they were shocked by how disingenuous the entire program on the EU’s side was as ultimately it led a naïve Theresa May into a trap whereby she – and the British parliament – were led with the choice between perishing in the frying pan or making a leap for the flames.

For older, experienced EU hacks, such as the author, there were no great surprises to the loaded gun which Brussels handed Britain – a deal which would surely have made its population worse off and an example to the rest of the EU who might have contemplated leaving – and the fake EU accession process for Turkey.

For that is surely what it is and has been. The only consistency with the talks, which started informally in 1999 when I was working in Brussels, is that they have never ever been sincere in that behind the façade of the EU serenading itself on the international circuit, with Turkey’s help, all EU negotiators in Brussels who really matter (in other words in the European Commission rather than obscure MEPs who you’ve never heard of) know perfectly well that the political resistance against Turkey joining the EU has never been greater than it is today. For years, France and Germany, have humoured the EU process of engaging with Turkey, while behind closed doors have remained firm against Turkey’s membership.

All EU negotiators in Brussels, who really matter, know perfectly well that the political resistance against Turkey joining the EU has never been greater than it is today.

And post Syrian war and its exodus towards Europe, this resistance has never been more stoic than today. In both Germany and France, for slightly different reasons, there is a fortuitous reaction against Muslim immigration.

The EU has an immigration problem which is fueling populist parties and – once again – the carrot and stick approach by Brussels towards Ankara to reform its human rights dossier has been revealed for being fake and nothing more than a conduit to assure European voters weeks ahead of EU elections in May that Turks will not be arriving by the millions into dilapidated job markets like in France.

The recent report’s timing was interesting. Just a matter of weeks before MEPs begin campaigning in EU elections it magically appears in the European parliament, which ‘adopts’ it, although it may as well be the Istanbul telephone directory in many ways. The report is non binding and could be attributed to the views of one single MEP. And after the EU elections, this may well be the EU’s rhetoric when, no doubt, it does a U turn again – after pressure from EU member states – and begins to humour Ankara once again with the prize of EU membership.

But just as Britain was promised for decades that the EU was not to develop into a federalist super power and that it had nothing to fear about losing control of its immigration policy, let alone fishing waters, Turkey should not be fooled any more by this game of cat and mouse. EU governments know that, like the mere notion of the EU having a foreign policy, that the Turkey dossier is merely a remedial chapter of a bigger fantasy. Turkey is once again being taken for a ride, as, for the moment, it suits the EU executive to stand over it and deliver its moral tutelage on how its expects to reform towards what the EU expects (although even this idea is banal and rank hypocrisy when you examine the mafia in Bulgaria running the country’s judiciary system and a similar story of unparalleled corruption in neighbouring Romania).

Ankara should learn the lessons of Brexit. The EU never plays fair, but always plays a game of dirty tricks and only has a one sided idea of negotiations.

In reality, it will not be down to EU institutions in Brussels whether Turkey ever becomes part of the EU club, but rather EU member states themselves. And Turkey may well take the opportunity to see the pendulum swing the other way again and show Brussels that it will no longer play the game. Turkey should make a lucid and timely statement this time round that it doesn’t want EU membership at any price and it will no longer humour the EU with the political game Brussels needs it to play.

Ankara should learn the lessons of Brexit. The EU never plays fair, but always plays a game of dirty tricks and only has a one sided idea of negotiations. What would Turkey get out of EU membership anyway? Access to a job market for millions of blue collar workers? Unlikely. More likely a permanent migraine which would cripple Turkish companies with thousands and thousands of EU regulations they would be required to adopt, new employment laws, minimum wage, reform of political system, tomes of environmental and health legislation – not to mention a ban on all trade deals Ankara would want to execute around the globe as its economy continues to develop. And let’s not even get onto the subject of arms procurement and Russian made S-400s.

No, the lessons of Brexit and the dirty tricks that the EU played – and played well – should be learnt by Ankara. This latest slap in the face should be seen in the cold light of day and should be taken as a line in the sand now for a new relationship with the EU. If Ankara is going to be a puppet that the EU plays when it entertains it – but then tosses aside when it is busier with other more important matters – then it is high time that Ankara shows Brussels that there is a high price to pay for such an arrangement. This latest news from Brussels with an MEP report stalling the process should signal from the Turkey’s side that the game is up.