The Medium-Term Program and the Future of the Turkish Economy

The Turkish economy grew by about 5.2 percent in the first half of this year, making Turkey the third fastest growing economy (after China and India) among G20 countries. Improved export performance and government incentives such as state-guaranteed loans and tax cuts were the key factors behind this success. 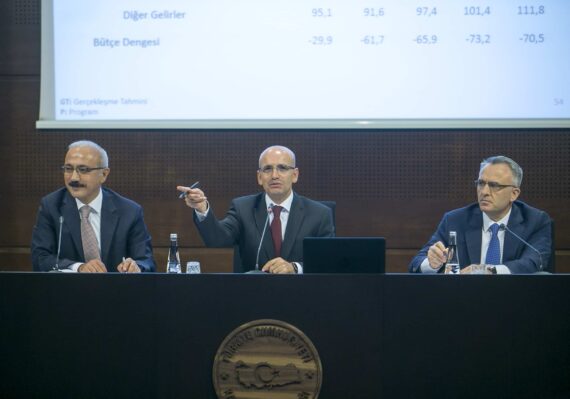 The Turkish government introduced its Medium-Term Program (MTP) last week. In this program the government revealed its economic expectations and targets for the next three years. The program provides policy-relevant clues that the government will pursue to achieve its medium-term goals. Turkish Deputy Prime Minister Mehmet Şimsek announced that the main objective of the MTP is to achieve sustainable economic growth by maintaining macro-economic stability, rising the quality of human sources and expanding the labor force.

The MTP targeted a 5.5 percent growth for the period of 2018-2020.  Although the Turkish economy lost momentum last year due to dramatic events, including terrorist attacks and the failed coup attempt, the economy recovered quickly.  The Turkish economy grew by about 5.2 percent in the first half of this year, making Turkey the third fastest growing economy (after China and India) among G20 countries. Improved export performance and government incentives such as state-guaranteed loans and tax cuts were the key factors behind this success. While not accomplishing the desired level in some areas including machinery and equipment, the contribution of private investments to growth in the second quarter was also good news for the Turkish economy.

The overall economic performance in the first half of this year indicates that as long as internal and external risks are controlled to some extent, and the government maintains a business environment in which the private sector can see the future more clearly, the Turkish economy is ready to succeed. If the government provides mechanisms that reduce uncertainties and channels its incentives to productive investments and promising industries, economic growth figures will be close to the targeted rate. Of course, it should be noted that global liquidity and the performance of trade partners are also crucial for reaching the target.

According to announced plans, the government will increase the motor vehicle tax on passenger cars by 40 percent, the financial sector’s corporate tax rate by 2 percentage points and income tax in the third tax bracket by 3 percentage points. The government expects these measures to contribute TL 28 billion ($8 billion) to the budget, preventing the budget deficit ratio to reach 3 percent. Finance Minister Naci Ağbal announced that the government will allocate TL 8 billion of this revenue to defense spending in order to strengthen the military capacity in the face of recent geopolitical risks.

Considering that the central bank will maintain a tight monetary stance until inflation outlooks improve, the government’s plan to tighten the budget could make it difficult to achieve the economic growth target. Therefore, it will not be surprising to see the government expand the budget to some extent in the near future.

Price stability is another key pillar of macroeconomic stability. Due to high food prices and the exchange rate pass-through effect, inflation has hit double digits (10.68 percent).  According to the MTP, inflation is expected to reside at 9.5 percent by the end of 2017. Target inflation rates for the next following years are 7 percent in 2018, 6 percent in 2019 and 5 percent in 2020. To curb inflation, the central bank has been implementing tight monetary policy for the last few quarters. Aside from a tight monetary policy, structural reforms that increase agricultural productivity, improve the agricultural supply chain, reduce the high dependency of Turkish manufacturing industries on foreign inputs and diversify domestic energy resources are needed in order to accommodate the inflation target. However, it should be underlined that there is a trade-off between economic growth and inflation; as the economy grows, inflation also tends to increase in Turkey. Therefore, it is relatively difficult to achieve both growth and inflation targets at the same time. Nevertheless, in this case the government is expected to give more priority to its growth target. The unemployment rate has also been moving along the double-digit path for a while.

As Şimşek underlined, although Turkey is creating a significant number of jobs every year, the unemployment rate remains high due to the un-parallel increase of participation into the labor force, especially from younger generations and women.  The unemployment rate, which is now 10.2 percent, is expected to decline gradually and fall to 9.6 percent in 2020. In order to decrease its unemployment level to an acceptable and desired percentage, the government needs to implement structural reforms in areas of education and labor market regulations. The government should also be more aggressive on business environment reforms that promote domestic private investments and revivify foreign direct investments.

It is always difficult to produce medium-term economic plans at a time when global uncertainties and geopolitical risks are high. Nowadays there are numerous external factors that affect economic equilibrium. However, since the global financial crisis, Turkey has proven on many occasions that, despite highly unpredictable factors and events, the country is capable of displaying a stronger-than-expected economic performance. What the government needs to do now is make this performance sustainable by using policy instruments with lowest opportunity costs. After a year of staggering political and social incidents, instilling confidence to economic agents is important. Accelerating economic growth will more effective in this respect. Therefore, it is reasonable for the government to prioritize economic growth in the next three years. In regards to inflation and unemployment, structural measures should be implemented without delay in this period.