During the opening of the ceremony, protests broke out across Gaza. 58 protesters have been killed and 2,700 have been injured. While the Israeli security forces have maintained their excessive use of force, 14 May, 2018, can be described as the bloodiest single day for Palestinians since 2014. 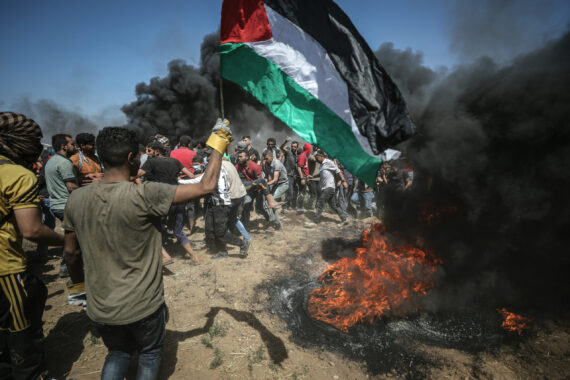 Palestinian protestors set tyres on fire in response to Israel's intervention during a protest, organized to mark the 70th anniversary of Nakba, also known as the Day of the Catastrophe in 1948, and against the United States' plans to relocate the U.S. Embassy from Tel Aviv to Jerusalem, near the Israeli border in the eastern part of Shuja'iyya neighborhood of Gaza City, Gaza on May 14, 2018. Anadolu Agency

In the immediate aftermath of the decision to recognize Jerusalem as the capital of Israel, the matter was convened to the United Nations General Assembly with the leadership of Turkey, on the basis that this move was against UN Security Council resolutions and was a matter that would lead to more conflict in the region.

Despite calls from leaders across the world, including U.S. allies in Europe, the Trump administration decided to ignore these calls, and went so far to threaten UN states that the U.S. will stop “funding” countries that will vote against them. Apart from threatening member states at the General Assembly, in response to Palestinians who pulled back from the negotiating table and stated that the U.S. had no room in the “peace process,” the U.S. Ambassador to the UN, Nikki Haley, stated, “The President has basically said he doesn’t want to give any additional funding, or stop funding, until the Palestinians agree to come back to the negotiation table.”

Despite all the chaos caused and the protests that occurred worldwide against the U.S. recognition of Jerusalem as the capital of Israel, the Trump administration officially opened their new embassy in the city.

Both Ivanka Trump and her husband, Jared Kushner, arrived for the opening of the embassy on Monday 13 May. President Trump himself was not there.

During the opening of the ceremony, protests broke out across Gaza. 58 protesters have been killed and 2,700 have been injured. While the Israeli security forces have maintained their excessive use of force, 14 May, 2018, can be described as the bloodiest single day for Palestinians since 2014.

While this bloodshed drew calls for restraint from some countries, including France and the U.K., Turkey called it a “massacre,” and declared a three day national mourn.

15 May, 1948, also known as “Nakba Day” or the “Catastrophe” marks the day of the displacement of Palestinians when the Israeli state was founded.

Protests will apparently increase all across the world with the commemoration of the Nakba, and the ongoing violence utilized by the Israeli government.

Turkish President Recep Tayyip Erdogan has called for an emergency OIC meeting and there will be a mass gathering on Friday at Yenikapi in protest of the terror committed by the Israeli state.