The New Iran Strategy: Bringing the Regime to its Knees through Sanctions and Isolation

The Trump administration’s new Iran strategy promises to bring the regime to its knees through sanctions and isolation but lacks a broad international coalition determined to achieve it. 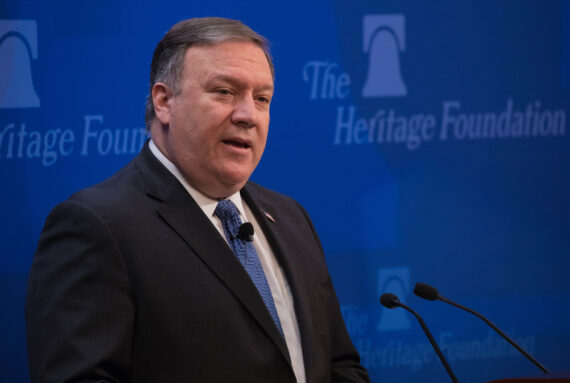 U.S. Secretary of State Mike Pompeo makes a speech at The Heritage Foundation in Washington, USA on May 21, 2018. Anadolu Agency

President Trump delivered a major campaign promise by pulling out of the Joint Comprehensive Plan of Action (JCPOA) and left everyone wondering what the new Iran policy would be. Last week, Secretary of State Mike Pompeo attempted to answer that question with a major policy speech at the Heritage Foundation. Pompeo criticized the JCPOA for its “fatal flaws,” including the sunset provisions, weak inspection and verification mechanisms, failure to address Iran’s ballistic and cruise missiles, and inadvertently providing finance for Iran’s destabilizing activities in the Middle East.

The new Iran strategy, he announced, would impose “unprecedented financial pressure,” deter “Iranian aggression” in the region, and advocate for the Iranian people by standing with them against the regime. The administration, he declared, would be open to a completely new deal that would definitively guarantee Iran not to have nuclear weapons and gives up on its “malign” activities in the Middle East.

The newly announced policy, which at times came quite close to calling for a regime change in Tehran, essentially promises a return to a policy of pressure and isolation of Iran. The kind of sweeping change in behavior it asks of Tehran is almost impossible for it would essentially require the regime to drop its main claims to legitimacy in the region. This is why those who argue that Pompeo’s speech essentially calls for a regime change have a point.

Regardless, we are entering a period of heightened tensions in the region especially if the U.S. does not contend itself with sanctions alone but undertakes a serious effort to push back against Iranian proxies throughout the region. In all likelihood, Iran would try to play the long game by resisting the financial pressures while trying to create frictions between the U.S. and its European and regional allies.

The new Iran strategy seeks to mount an unprecedented pressure campaign to bring the regime to its knees. It does point to a way out but it sounds a lot like the U.S. is seeking the regime’s total surrender or economic collapse. The U.S. will need both its European and regional allies to implement the kind of overwhelming pressure it promises. The Europeans will be a lot less willing than the last time in coordinating a new round of sanctions. Regional allies the U.S. is counting on will be either ineffective or unwilling to confront Iran and its proxies in the region.

Furthermore, it is highly doubtful whether the U.S. can bring Russia and China on board, as their cooperation in the JCPOA was crucially important. The administration’s unilateral declaration of a new Iran policy carries all the risks and deficiencies associated with acting alone and without a strategy to bring about an international coalition supporting it. Non-European powers will be less than willing to isolate Iran or requiring a high price tag to cooperate with the U.S., which will be hard pressed to convince others that it will stick to its word this time round.

If the Trump administration does not succeed in forging a broad coalition willing to isolate Iran, a handful of European allies and Israel, Saudi Arabia, the United Arab Emirates, and Egypt in the region, as part of an anti-Iran front, will only support its new Iran strategy. Each of these allies will have a different priority vis-a-vis Iran, which will be difficult to reconcile and produce an effective policy.

Part of the problem with Obama’s Iran policy was that it lacked a buy in from “traditional” regional allies and failed to assuage their concerns. Now, the Trump administration seems to side with them in a big way, but without a comprehensive policy that addresses their concerns and brings Iran to the negotiating table. The Trump administration’s new Iran strategy promises to bring the regime to its knees through sanctions and isolation but lacks a broad international coalition determined to achieve it.