The Iraqi central government will lay a new Kirkuk-Ceyhan oil pipeline with a length of approximately 350 kilometers and a daily capacity of 1 million barrels. 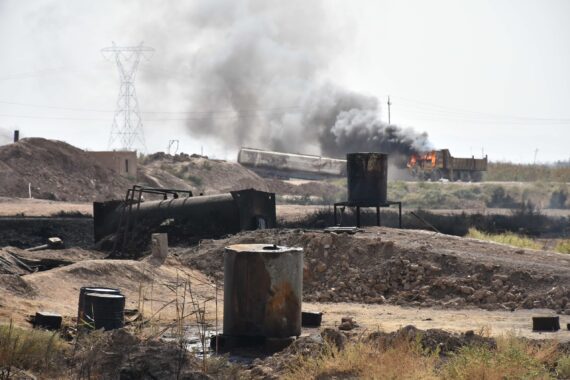 After the seizure of Mosul in June 2014 by the terrorist organization Deash, the Iraqi Petroleum Ministry announced that a new pipeline will be constructed to the border of Turkey, since the pipelines carrying Kirkuk oil to the port of Ceyhan in the southern Adana province became irreparable.

With the construction of the pipeline, the Iraqi central government aims to strengthen its control over the oil wells in Kirkuk, on which it seized control after the military operation on October 16, and to bypass the Iraqi Kurdish Regional Government on oil exports.

The pipeline that will transport Kirkuk oil to the port of Ceyhan will pass from Saladin province to Kirkuk and Mosul and from Dohuk’s Faysh Khabur district to Turkey from which the pipeline section in Iraq’s territories will be 350 kilometers (217 miles) long.

The new pipeline section, with a daily export capacity of 1 million barrels, will replace the old pipeline that suffered severe damage in terror attacks after Daesh took control of Mosul in June 2014.

In a statement on October 17, the Iraqi Oil Minister Jabar Ali al-Luaibi declared that his government aims to increase the export capacity of Kirkuk oil fields from 450 thousand barrels to 1 million barrels per day with the help of international oil companies’ investments.

In Kirkuk there are 5 oil fields in Havana, Bai Hasan, Babagurgur, Hebaziya and Cenbure. There are more than one oil well in each of these fields.

Havana and Bai Hasan, which were under the control of the KRG for about 3 years, were able to export 300,000 barrels per day by October 16th.

The Kirkuk-based North Oil Company of the central government could export approximately 150 thousand barrels of oil per day on average from the remaining three Kirkuk oil fields, the oil ministry said.

Iraq is the second largest crude oil producer in the Organization of the Petroleum Exporting Countries (OPEC) after Saudi Arabia, and holds the world’s fifth largest proven crude oil reserves after Venezuela, Saudi Arabia, Canada, and Iran, according to the U.S. Energy Information Administration (EIA).