Ankara should use the partnership with Beijing to boost its political, economic and security interests in the greater Eurasia basin. Needless to say, it will positively contribute to Turkey’s realignment with the Turkic world, where Ankara’s influence has been limited due to other developments surrounding its domestic and foreign policies. 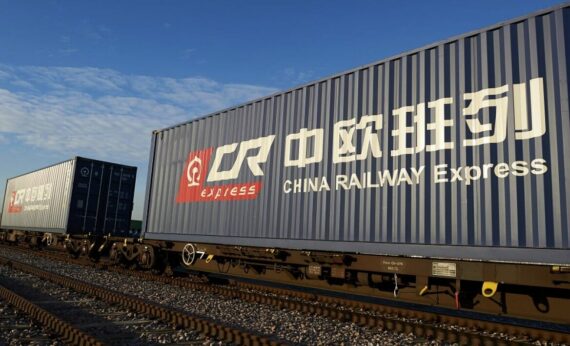 The ancient silk route was a caravan trade corridor between China, Transoxiana, Persia, Caucasia, Anatolia, the Levant and Europe. Plans for the new one will go along the same routes but include modern facilities for transportation and infrastructure. The Chinese government organized a forum on May 14-15 and announced its long-anticipated “One Belt, One Road (OBOR)” initiative in Beijing. First proposed by the current Chinese president Xi Jinping in 2013, the new Silk Road project is aimed at reinvigorating commerce and trade by Chinese-led economic globalization.

As the global balance of power has been shifting towards Asia, the Chinese leadership has portrayed the Belt and Road initiative as the “project of the century”. An estimated 65 countries, roughly 60% of the world’s population which produce nearly 70% of the global GDP, will take part in the project. The OBOR initiative will consist of both territorial and maritime routes between China and Eurasia and Africa westward, and from the Asia-Pacific in the southward direction.

China has pledged to spend $124 billion for the project which fundamentally envisages reducing time and distance for the shipment of commodities between China and Europe and vice versa. Beijing inaugurated the Asian Infrastructure and Investment Bank (AIIB) together with more than 45 countries in 2016 and the Silk Road Fund with Russia in 2015, allocating a huge amount of money to finance and materialize all these ambitious mega projects in the near future.

Once finished, the average duration of commercial transportation will be decreased from more than 45 days to a minimum of 10 between London/Hamburg and Beijing/Shanghai. The modern Silk Road project entails the construction of high-speed railway networks, highway connections, ports, logistic centres, energy pipelines and other infrastructure facilities in the corridor countries. For the time being, Beijing’s ongoing development in the China-Pakistan economic corridor, like along the Karakorum Highway and the Gwadar port are among the most concrete examples of the project.

The project entirely reflects the commercial pragmatism of Chinese foreign policy, which has involved pursuing Beijing’s economic interests in the world since China became a member in the World Trade Organization in 2001. In this way, China aims to access new energy areas and raw material-rich basins for fuelling the unsatisfied needs of its booming economy.

The OBOR will also expand Beijing’s political and cultural influences despite the Chinese government’s official rhetoric, which emphasizes economic gains of the project for the participant countries. It will require China to closely cooperate with some economic and security blocks in which Beijing is not a member, such as the ASEAN, the Eurasian Economic Union, the African Union, the Arab League and the European Union.

Arguably, all these initiatives are a natural extension of China’s western development plan, an economic modernization and reform project aimed at integrating ethnic minority areas like Tibet, Xinjiang and Inner Mongolia with the Han majority eastern provinces. Started at a local level, and now transformed into a global aspiration, the proposed Silk Road Economic Belt promises a lot for China in particular and for the aforementioned regions in general. It is expected to increase GDP levels between 4-7 percent by boosting trade and mutual economic relations among the participant countries.

Given the significance of its geographical position, Turkey, which straddles between Europe and Asia, is one of the most important countries in the project. In this regard, the new Silk Road seems to enhance cooperation between China and Turkey, namely the two corners of the Asian continent. China has so far urged Ankara to actively participate in the project and sought commercial opportunities in Turkey to integrate in its east-west economic corridor.

Turkey’s leadership has also been very keen to increase cooperation with China as the country’s decadent relations with the West in recent years created social and political discontent and mistrust among the Turkish public. Thus, Turkey has attempted to diversify its markets in order to reduce its decades-old economic dependency on the EU bloc countries since the 2008 financial-economic crisis.

Under these circumstances, Turkey and China sealed a strategic partnership agreement in 2010 which gradually increased economic cooperation, most favourably for the latter. As a result, China has surpassed Germany and become the top source of imports for Turkey since then. The parties now have a roughly $28 billion trade volume with a deficit more than $25 billion, in favour of China. As the Chinese government proposed the new Silk Road initiatives, both countries have decided to deepen such an economic cooperation despite the ongoing problems considering the separatist cause of ethnically Turkic Muslim Uyghurs in China’s restive north-western province of Xinjiang.

These trends in Ankara-Beijing bilateral relations have undoubtedly caused some apprehensions in the West about Turkey’s geopolitical shift towards Asia, particularly China. But, the main driving force behind Turkey’s flourishing ties with China has so far been the economy (infrastructure) which of course shaped its politics (superstructure) with China and other Asian countries like India and Japan in the past few years. Therefore, President Recep Tayyip Erdogan’s attendance at the OBOR forum has signified that Turkey’s political will is keen to further pursue its booming economic interests in Asia.

An interconnected infrastructure network would be obviously beneficial for Turkey’s opening up to the East, where huge commercial and market potentials as well as investment opportunities will have a positive turnaround over its economy, especially in south-eastern Anatolia. Turkey has constructed some mega projects in recent years, such as a third bridge and underway tunnels on the Bosporus together with massive highway and railway connections in and around the region like Baku-Tbilisi-Kars railway, in order to integrate its transportation facilities with its eastern neighbours.

The Chinese side on the other hand has already shown its enthusiasm when Beijing granted a $750 million loan to Turkey in 2007 for the construction of Ankara-Istanbul high-speed railway connection. Besides, China expects to collaborate on the construction of Turkey’s third nuclear power plant, a lucrative bonanza on which Xi and Erdogan agreed to accelerate work during a meeting on the sidelines of the OBOR forum.

The parties will continue to speed up mutual economic cooperation as they also agreed to hold a Turkey tourism year in China next year as well as establishing cultural centres in both countries. In addition, the Chinese media giant Startimes has announced that it plans to invest in Turkey which includes bringing new technologies and exportation of Turkish TV series to more countries in Africa and Asia. In brief, the Sino-Turkish economic partnership holds great potential, but the only thing raising concerns in Ankara is the ever-increasing trade deficit which is an unavoidable result of China’s competitive advantage, an issue that the Turkish side needs to cope with in the medium term.

More than an economic corridor: A security belt between China and Turkey

Both China and Turkey also pursue security interests in Asia, where some non-conventional transboundary threats have been challenging their domestic security. Hence, the new silk road project is regarded as an economic panacea to those threats since it is also expected to generate a security belt with the integration of its participant states. In this way, the project might be said to contribute to the mitigation of regional and international threats and conflicts in line with China’s foreign security concept, which heavily stresses economic cooperation elsewhere in the world.

As for Turkey, the Silk Road economic corridor might also align Turkey and Asian countries in terms of security priorities and military cooperation.

As for Turkey, the Silk Road economic corridor might also align Turkey and Asian countries in terms of security priorities and military cooperation. Turkey has long been a destination route of some transboundary security problems that come from mainly its Asian neighbourhood, such as the increasing number of refugees, human trafficking, smuggling, terrorism and radical movements. For instance, the country has often been targeted by Daesh through Central Asian recruits who were benefiting from the ongoing conflicts in Syria. Besides, a refugee influx from the post-Soviet Turkic republics, Afghanistan, Iran and South Asian countries created a security vacuum which made Turkey vulnerable to non-conventional threats in recent years.

All these challenges oblige Ankara to enhance security cooperation in Eurasia where Russian and Chinese-led organizations have come to the fore as a geopolitical counterbalance to the West since President Erdogan announced that Turkey could become a member of the Shanghai Cooperation Organization (SCO). Although it is not an economic alternative to the European Union or NATO’s collective security, the SCO is a functional security platform that aims to struggle with the “three sources of evil” in the region, namely terrorism, separatism and extremism. In this respect, Turkey’s bid to join the SCO, in which Ankara is already a dialogue partner since 2012, would be an unavoidable process as a result of its economic integration with Asia and/or China.

China is also eager to cooperate on security issues with Turkey as it considers possible Turkish membership in the SCO. Despite their boosting commercial ties, diplomatic tensions have increased between the parties due to the Chinese government’s oppressive policies against ethnic Uyghurs in Xinjiang. The Turkish public has been very sensitive on the basic rights, religious freedoms and life standards of Uyghurs since the Urumqi riots of 2009 and its aftermath.

However, the Chinese side has long been securitizing the Uyghur issue within the framework of the so-called ‘war on terror’ as some Uyghur separatists have organized under the flagship of the Turkistan Islamic Party (TIP), previously known as the East Turkistan Islamic Movement (ETIM). When thousands of TIP militants joined the war in Syria on behalf of terror groups like Daesh and al Qaeda, China urged Turkey to check the militants’ clandestine entrance and exit routes on the Turkish-Syrian border, over fears they could return to China to launch terrorist attacks there. Thus, during their meeting China’s President Xi offered President Erdogan a greater counter-terrorism cooperation which included an agreement on the extradition of alleged criminals.

So, Beijing skilfully uses its economic influences to diminish security threats on the Silk Road, or vice versa, it promotes sustainable economic development to alleviate conflicts and disputes in the region. It becomes unequivocally a Chinese strategy in its foreign relations, especially with Turkey, which has had a low level relationship with China since diplomatic ties were established in 1971.

However, the relationship between the two nations is now reaching a new level, as the Chinese side is keen to call a strategic partnership on the one hand, but on the other, Turkey still seems ambivalent on whether or not to geopolitically shift towards a Chinese-led world order. Yet, Ankara should also use such a partnership with Beijing to boost its political, economic and security interests in the greater Eurasia basin. Needless to say, it will positively contribute to Turkey’s realignment with the Turkic world, where Ankara’s influence has been limited due to other developments surrounding its domestic and foreign policies.

Eşref Yalınkılıçlı is a Eurasia analyst based in Moscow, and a broadcast journalist at Turkish Radio and Television Corporation (TRT). He covers and writes about Russia and the post-Soviet space, as well as Turkey’s foreign relations with Russia, Central Asia, and the Caucasus. Yalınkılıçlı earned his master’s degree at the IRES Institute for Russian and Eurasian Studies at Uppsala University in Sweden.