Eight months later, the Assad regime, backed by Russian air power, has conducted a ruthless aerial campaign which has forced over 200,000 people to flee their homes in less than a month. Meanwhile, 200 people have been killed, nearly all by indiscriminate shelling and aerial bombing. 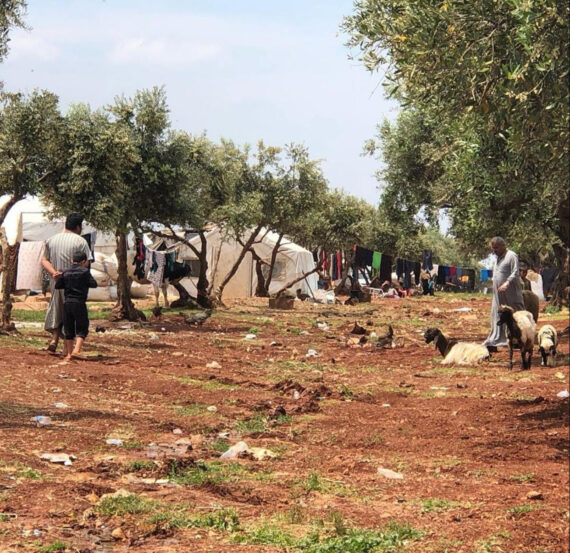 White Helmet rescue volunteers and civilians search for survivors in building destroyed during an air strike by Syrian regime forces and their allies on the town of Ariha, in the southern outskirts of Syria's Idlib province on May 27, 2019. Getty Images

More than three weeks of airstrikes and ground attacks have left Syrians in the Idlib province stranded and scared.

The United Nations’ director of humanitarian affairs, Mark Lowcock, warned that a full-blown ground offensive by regime coalition forces, which would seek to seize the province entirely from opposition control, would result in the worst humanitarian crisis of the 21st century.

This rhetoric isn’t new. In fact, it sounds a lot like the rhetoric pushed in September of 2018 – when the United States and its EU partners collectively cut funding to civil society groups in Idlib, at the same time as the international community pushed Turkey and Russia to reach a deal in Sochi that would create “demilitarized zones” on the provincial borders of Idlib, Hama, and Aleppo, which would ostensibly prevent a possible humanitarian crisis. However, as part of a sustained wartime strategy which seeks to expose opposition-controlled areas to pure attrition, Russia and the Assad regime have violated those deals more than 600 times since April, according to the UN’s latest assessment.

Eight months later, the Assad regime, backed by Russian air power, has conducted a ruthless aerial campaign which has forced over 200,000 people to flee their homes in less than a month. Meanwhile, 200 people have been killed, nearly all by indiscriminate shelling and aerial bombing.

Russia and the Assad regime have violated the political deals more than 600 times since April, according to the UN’s latest assessment.

Russia insists that it is targeting so-called terrorists, while rights groups like Amnesty International say Russian-backed regime coalition attacks are deliberately and systematically targeting health facilities, in an effort which amounts to war crimes.

Despite the overwhelmingly clear evidence towards those responsible for this destruction, the international community has failed to hold any party to account for the demolishment of medical facilities or any other attacks over the past several weeks.

Recently, a debate at the UN concluded that a party in the conflict with access to advanced weaponry was carrying out the attacks. But despite this, the debate failed to name any particular party as accountable for the attacks. This is obviously a moot point, and eliminates the need for an international response at any level.

The current wave of relentless aerial bombardment is reminiscent of the Russian-backed regime coalition offensives – in 2016 in Aleppo, and in 2017 in the rural Damascus countryside. The results of both of those military operations were the forced displacement of tens of thousands of civilians and opposition fighters to northern Syria, many of them to Idlib.

Just like Russia and the Assad regime have done in the past, the ongoing aerial campaign has targeted critical infrastructure including hospitals and emergency services like the Syrian Civil Defense, more commonly referred to as the White Helmets, in order to cut civilians off from critical lifelines that enable them to continue living in their homes and going about their daily lives.

The current wave of relentless aerial bombardment of Idlib is reminiscent of the Russian-backed regime coalition offensives – in 2016 in Aleppo, and in 2017 in the rural Damascus countryside.

During a recent trip to Idlib, my cameraman and producer drove 100km south of the Turkish border into Idlib province. We passed through at least a dozen armed opposition checkpoints, past a number of armed opposition headquarters, and on significant stretches of both the north-south M5 and east-west M4 highways. Despite Russian and regime claims that they were targeting so-called terror groups, all of the checkpoints and headquarters we passed by – many of which were on those main transit routes such as the M5 – were unscathed, and armed opposition fighters simply waved us through. In contrast, the towns we drove through were more like ghost towns, with few people remaining in the streets. Those who were outside dragged their feet as they walked through the broken streets, with piles of rubble and broken concrete serving as the canvas behind them.

Our ultimate destination was Kafrnabel, the home of the late Syrian philosopher and activist Raed al-Fares and a longtime hub of resistance in Idlib province. But as we passed through, from highway to town to hospital center, the scene became increasingly more grim.

When we arrived at the Kafrnabel Surgical Hospital, we found a scene that indicated brute force and ill intent. The entire hospital, from floor to ceiling, was caved in – and all the equipment and supplies in the hospital were unfit for service. I began speaking to the doctor who served as the head administrator of the hospital, but midway through, warplanes started patrolling above our heads. The doctor, obviously disturbed by his past encounters with Russian air power, was not willing to stick around any longer. He cut the interview short, and went off to seek shelter. At this moment, the first bomb fell.

Driving towards the place of the attack on the White Helmets facility in Kafranbel, Syria on May 13. Photo source, Obaida Hitto

As we left the hospital ourselves to go somewhere safe, a large plume of smoke rose up over the town’s humble skyline. Exhausted but determined, we considered our role in the area as journalists, and decided to go towards the scene of the attack.

Suddenly, I heard a sound, looked up into the sky, and there it was: as though a little paper airplane we played with when we were children, a Russian Sukhoi-series jet.

Upon our arrival at the scene of the attack, we piled out of the car and debated amongst ourselves whether it was safe to park there – whether our car would be struck by a falling bomb. This fear was legitimate, as the regime coalition has kept a well-documented history of double-tap strikes on areas it has targeted. While we discussed, warplanes continued to circle above us. Suddenly, I heard a sound, looked up into the sky, and there it was: as though a little paper airplane we played with when we were children, a Russian Sukhoi-series jet glided across the sky unabated, free to do as it pleases.

Moments later, a loud bang, followed by the screams of women and children pouring out of their homes. They ran, panicked, away from the scene of the attack.

In the distance, close to the first blast site, a plume of smoke rose up over the buildings surrounding us. We moved closer to the scene of the attack to get a better look.

As we arrived, we saw the result of the strike: a White Helmets civil defense center was flattened. A chaotic scene unfolded before us as civilians, including young children, stood in the streets, in shock from the bombings, debating whether they should stay or leave.

This is the reality on the ground in Idlib today. For the outside world, this may come as a surprise: there is, of course, an internationally recognized de-escalation zone and de-militarized zone, negotiated by the international community, which ostensibly exists to protect civilians from such attacks. But for the millions of people living in northern Syria, many of whom have been displaced multiple times during the war, this is just another reason for them to continue what they started 8 years ago: a popular revolution against the monster which threatens their families, homes, and lives, which they call the regime of Bashar al-Assad.

Moment of the attack on White Helmets facility in Kafranbel, Syria May 13. Photo source, Obaida Hitto