The Occupation of Deir Ezzor

The frustration of the local Arab population in Deir Ezzor is grounded in the unequal share of oil incomes, arbitrary arrests, forced conscription, the relationship of the U.S. partner forces with the Assad regime, and the limited freedom of movement imposed by the YPG. 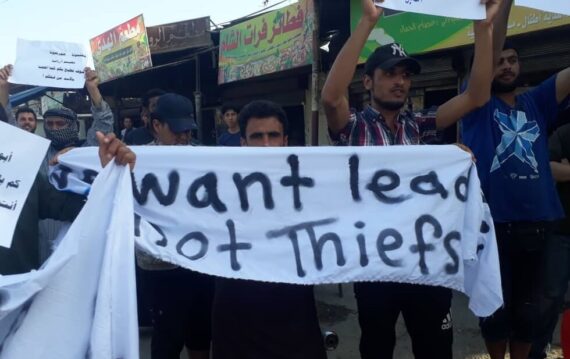 The local people of Deir Ezzor, driven by tribal dynamics, organized wide-scaled demonstrations against the YPG-dominated governance in their areas. The demonstrators cut off roads from Deir Ezzor to Hasakah and burned tires. The frustration of the local Arab population in Deir Ezzor is grounded in the unequal share of oil incomes, relations of U.S. partner forces with the Assad regime, arbitrary arrests, forced conscription, and the limited freedom of movement imposed by the YPG. Slogans of the demonstrators also included: “No to Kurdish occupation.” As negotiations to end the demonstrations began, tribe leaders handed over a 20-point demand list with a 72-hour ultimatum. The overall situation in Deir is miserable and being exploited by Daesh, which waged an insurgency in the region. Therefore, a new approach is urgently needed. Deir Ezzor was once a stronghold of the Syrian opposition against the Assad regime, and should become so again.

Reasons behind the unrest in Deir Ezzor

Since the capture of the Deir Ezzor region by U.S. partner forces dominated by the Marxist YPG, the new governors have been perceived as occupiers by the local people. As the YPG lacks the outreach into Deir Ezzor’s tribal society, people living in the region were banned from leaving their areas. Anyone leaving the area for medical reasons has to name a guarantor to ensure that he or she has returned. A practice formerly used by Daesh.

Since the capture of the Deir Ezzor region by U.S. partner forces dominated by the Marxist YPG, the new governors have been perceived as occupiers by the local people.

According to DeirezZor24 News – a Syrian activist network – commanders of U.S. partner forces like Fawaz Al-Teraikhim are blackmailing people to pay or be arrested on charge of belonging to Daesh.

Other reasons for the people in Deir Ezzor to demonstrate against the YPG-dominated Syrian Democratic Forces include the arbitrary arrests and the forced recruitment of youth. As the Deir Ezzor region is a tribal area, solidarity with these people are high.

Picture reads: “In SDF prisons, Arabs are 100 percent and Kurds 0 percent. Where is Justice?”

The overall security situation in the region is weak. An incident resembling this is for instance in Bassirah, where demonstrations took place, masked men kidnapped a shop owner, took a copy of his shops keys and threatened him by telling him that if he changed the locks, they will burn the shop and return to kidnap and kill him.

The revenue income of the oil-rich region has been a main topic of the local people. They are angry about the fact that the YPG supplies the Assad regime with oil from the region and hence demand a stop of oil deliveries to the regime.

Picture reads “They export oil to our children’s killer.”

The local population regards the current governance backed by the Americans as occupiers. A local who wanted to remain anonymous told the author, “Deir Ezzor is governed by Kurds; some of them not even Syrian Kurds. The people of Deir Ezzor are all Arabs. No Kurd is living here at all.”

On May 1, tribal elders in Deir Ezzor gathered together and handed over a 20-point demand list to the YPG-dominated Syrian Democratic Forces, giving the other side a 72-hour ultimatum. Tribes demanded the release of detained and the cessation of raids, to hand the administration to the local people, to treat the people of Deir ez-Zor like the people of Raqqa and Hasakah, and to allow them to enter and exit the area with sponsorship or the guarantee of another person. Tribes also demanded the abolishment of compulsory recruitment.

On May 1, tribal elders in Deir Ezzor gathered together and handed over a 20-point demand list to the YPG-dominated SDF, giving the other side a 72-hour ultimatum.

Since the administrative performance of the U.S. partners in Deir Ezzor have proved to be very bad, Daesh terrorists are exploiting the situation to their own advantage. Once the terrorist organization controlled the entire area, but after their military lost, Daesh changed its tactics to guerilla warfare. To perform efficient guerilla warfare, either a safe zone or popular support is needed. As Daesh does not have a safe zone, they need to move amongst the people as fish swims in the sea, which they seem capable of doing as the local population is frustrated with the YPG-dominated governance of their home towns. To eliminate this supportive environment for Daesh, the region has to be governed by its own people.

Remaking Deir Ezzor the stronghold of the Syrian opposition

Picture reads “Return it to the way it started.”

In this regard, one suggestion could be to turn Deir Ezzor to a Syrian opposition stronghold backed by the U.S. and Turkey. This idea would address the call of the local people to ‘return it to the way it started.’ Displaced peoples in the Euphrates Shield areas who originate from Deir Ezzor could be relocated to their hometowns. Additionally fighters from Deir Ezzor within the National Army like the 20th Brigade, Jaysh al Sharqiyyah and Ahrar al Sharqiyyah could be relocated as well. By sending convoys similar to the evacuations from Ghouta and Homs to northern Syria, these people and fighters could be sent in convoys to Deir Ezzor. The U.S. could actively work together with the local people in Deir Ezzor. By doing so, the revolutionary flag would once again wave over the area, preventing the possibility of the Assad regime reaching a deal with the YPG in order to control the oil-rich region. Most importantly, locals would not feel like they are being governed by occupiers, which will help ensure the defeat of Daesh.