The Populist Turn in Turkish Politics: Why are People Leaving?

In light of this picture, the claim or the fact that some educated and wealthy people have left the country can be evaluated as the acceptance of the loss of political struggle by the elitist against populist politics. It is a sign of defeatism, if not a sign of caprice. 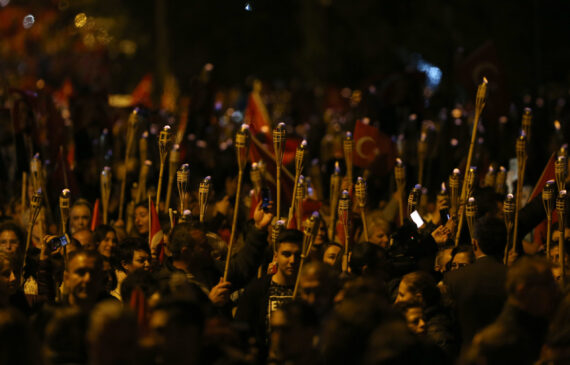 The New York Times claimed that some members of the educated and wealthy sections of Turkish society have started to leave the country. The number of people who had left the country were argued to be around a quarter million. This claim was rebuffed by Turkish officials. According to the official numbers, around 113 thousand people had left the country in 2017 whereas around 101 thousand people had returned. Upon that, the NYT had to apologize and make a correction about the numbers used in the news.

However, some national media outlets have snapped at the chance and kept the news alive for a while. They shifted the emphasis of the debate towards the reasons why people had decided to leave. They featured their pages with interviews with those who had already left the country or were about to leave. This was enriched by some other news that some members of wealthy families adopted citizenship from a minor European country. The lack of liberty, disrespect for merit, economic slowdown and the problems with the national education system are counted among the reasons.

After claiming that around a quarter million people were leaving the country, the NYT had to apologize when Turkish officials rebuffed this claim by showing the real figures. Around 113,000 people left the country in 2017 and around 101,000 returned.

The upshot of this media campaign is about the fact that the economic and cultural elites in the country have grown restless about the direction Turkey is leading in. They argue that Turkey is becoming a more conservative-religious and authoritarian country. This is claimed to narrow down the living space of people with a secular life-style. Thus, some of them – those that can afford it – leave the country since they believe that this political trend cannot be contained and that the “old Turkey” is far from being retrieved.

Indeed, this is a Turkish version of the elitist backlash, which became one of the significant topics of contemporary politics. The elites in Turkey and in other places of the world are concerned with the recent rise of the masses against the establishment. They basically argue that politics should be designed around an institutional framework, which relies on the idea of “less people.” They point at the detrimental impact of the democratization of the political system since the 19th century. They claim that the people’s will, which was proposed as the single legitimizing base of power in politics against the absolutist rulers, is to be limited through various political mechanisms in today’s world. Some even claim that the general will can no longer be sustained as the legitimacy base of politics. For this line of thinking, pluralism or elitism is supposed to be the legitimacy base. Hence, they suggest that power should be shared by the elites and the masses, where the elites get the largest share, or political power should be dispersed so that the masses don’t play an important role in the country’s governance.

People that can afford to leave the country tend to be those who claim that Turkey is becoming more conservative-religious and authoritarian. They’re leaving because they believe that this political trend cannot be contained and that the “old Turkey” is far from being retrieved.

Turkey, too, has witnessed a populist turn. After coming to power in 2002, the AK Party has defied the elitist rule in the country and has succeeded to shift the legitimacy base of power towards the general (or national) will. This constitutes the basic tenet of populism, as we define populism as a thin-centered ideology, which is based on a political framework that works around an antagonism between the elites and the masses.

Accordingly, the AK Party has framed and shaped Turkish politics around the conflict between the Kemalist elites and the excluded masses in its struggle for democracy. Despite the resistance of the elites and their supporters in society, the role of the people in politics has significantly increased in the last two decades. Turkey has finally democratized. Populist politics has replaced elitist politics. The process of democratization has been enshrined with the institutionalization of the presidential system, which came into effect with the June 24 elections. Indeed, the quintessential feature of Turkey’s presidential system is its achievement to make populist politics triumphant against its two main rivals, which are pluralist and elitist politics.

The claim or the fact that some educated and wealthy people have left the country can be evaluated as the acceptance of the loss of political struggle by the elitist against populist politics. It is a sign of defeatism, if not a sign of caprice.

In light of this picture, the claim or the fact that some educated and wealthy people have left the country can be evaluated as the acceptance of the loss of political struggle by the elitist against populist politics. It is a sign of defeatism, if not a sign of caprice. That’s why some commentators and media figures backing elitist or pluralist politics plead their fellow partisans not to leave the country and to continue with their struggle.