The Praxis of Husamettin Arslan

Arslan had said that his youth was spent in an interfile social circle due to the fact that he was inflicted with “ideological cancer.” Indeed, he was a “radical, pedantic and a fervent ideologue” at a time when people suffered from contracted mindsets. 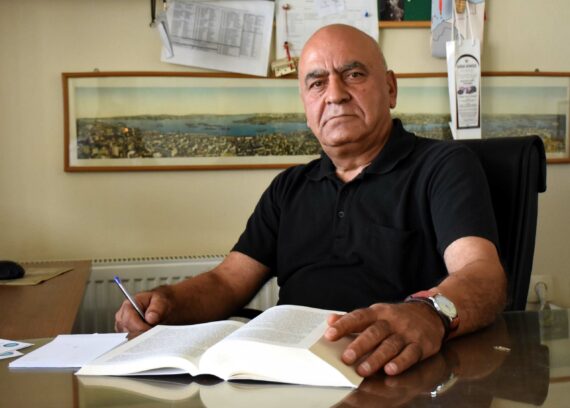 In order to understand the intellectual activities of the late Husamettin Arslan, his character needs to be evaluated. He was interested in multidimensional analysis and had multiple fields of interest. For this reason, he wasn’t systematic, but a little scattered. It is important to know the milestones of his life, from his childhood to his death, in order to make sense of his spirit, quests and his “return home.” We can’t explain his tremendous effort to translate works while working as an academic without talking about his father’s work discipline. Considering the fact that he was aware that he had to perceive life, culture, ideology and any other issue from his own standpoint, these consequences became more important.

In this respect, he once said the following: “Our social and historical practical lives (or praxis) determine our theories, problems and the resolution of these problems.”

Political consciousness, ideology and the aftermath

Throughout his childhood, he took long walks with his father at sunrise. It’s probably due to this that he always preferred sunrise to any time of the day. While he was on the road at 5 am in the morning, his father’s recital of a folk song would accompany the singing birds: “I wish only a wish, O Almighty/Never let me lean on the vile.” Is there any need to imagine the rest? It is obvious that this work discipline is the most precious characteristic he had inherited from his industrious father.

He met with his first “modern dress,” a black school uniform with a white collar and a military hat with a huge visor when he was six. He was exhilarated when he acquired his unofficial school report after attending school without registering for a year. As a child of a family supporting the Democrat Party, he never understood why the village’s imam, Molla Kamil, supported the Republican People’s Party.

In 1963, he encountered one of the first products of modern technology – the battery powered radio. He always remembered that his father listened to the 1 pm broadcast from this radio, which only two families possessed in the entire village. As the situation in Cyprus became increasingly dire at the time, no one would make the faintest noise in the house during the radio broadcast.

Arslan acquired his first “modern political consciousness” from his primary school teacher, who replaced his father in terms of authority. We may call it the unexpected and inexplicable domination of certain moments over human memory. In fact, his teacher told stories about Adnan Menderes and the Democrat Party, which are later known to be false. This encounter was probably the earliest source of his works and speeches on political consciousness, in which he undertakes the role of a social intellectual who observes the world from his de facto standpoint.

When Arslan finished primary school, he left his father and stepped into a world unknown to those in the village. His life truly began with public boarding school. After Tunceli Training School, Arslan went to Ankara. His father always bid farewell to him with the same words: “You know our condition. Work and study accordingly.” Arslan had said that his youth was spent in an interfile social circle due to the fact that he was inflicted with “ideological cancer.” Indeed, he was a “radical, pedantic and a fervent ideologue” at a time when people suffered from contracted mindsets.

Years later, he discussed ideology as a contested, conflicted and possibly unsolvable modern issue with Terry Eagleton at what he called the “center of the universe.” Arslan’s expression of ideologies, which attempt to replicate the functions of religions today, not being an issue for those who lived in the Middle Ages or the Pagan world, was closely tied with his own experiences. Meanwhile, he stated that he was in agreement with Eagleton in terms of his thesis “the end of ideology,” which advocates the idea that ideologies became absolute in Europe after the 1950s, as the welfare state satisfied the needs of the poor and working classes.

During the hard times in which people dug their heels in, he became part of the movement dominated by obedience and loyalty, and which excommunicated those with comprehensive ideas. While he was studying at the History department at Hacettepe University, Arslan was obsessed with the issue of regime. During these years he was in opposition to everything and believed that if the regime were to change everything in life would be perfect. Meanwhile, his father always told him: “These efforts are in vain, leftists or rightists alike.”

After having completed his master’s thesis on Contemporary History of Turkey, he changed his fields. At the Faculty of Literature at Istanbul University, his doctorate dissertation was on the “sociology of knowledge” and then the new sociology discipline, “sociology of science,” which were under the fields of General Sociology and Methodology.

‘Epistemic Community,’ which made ripples across the fields of philosophy and social science, showed that he was on a very specific, meticulous and precious path to knowledge. A prominent part of his translations was directed towards consolidating the stance against scientism, which his afore mentioned book made a breakthrough. Of course, his readings on philosophy, which became his sole intellectual hobby after the 1980s, played a great role in this. We should probably underscore that he believed hobbies lasted longer than duties. According to Arslan, if history and philosophy are not studied together, sociology is nothing but a technology. For this reason, he defined sociology as the “philosophy of society.” Indeed, sociology is “social philosophy.” For this reason, he always advocated “philosophical” sociology over any “orthodox” understanding of sociology. He strode on the streets of intellectualism with this mindset. It’s not in vain that we’re talking about an attained success.

An oasis in the intellectual wasteland: Arslan’s translations

A social scientist had drawn similarities between translation and sowing couch grass: “Once it’s rooted, you can never get rid of it.” Indeed, translations, especially those after the 1980s, had a crucial role in our cultural life. However, despite its value and the effort spent, the act of translation never obtained the reputation it deserved in our world of thought. Indubitably, this is also true for the whole world. Despite the increase, the numbers of translated texts still remain inadequate. Many crucial philosophical texts were only translated into Turkish during the 2000s, and there are still many others which are yet to be translated. For instance, Martin Heidegger’s Being and Time, which is deemed to be one of the most important philosophical texts, wasn’t translated into Turkish until the 2000s. Meanwhile, Heidegger’s Black Notebooks is yet to be translated.

Considering all of this, it is easier to understand the value of Husamettin Arslan’s translations and his sacrifices. As a translator on the verge of rediscovering philosophy and social sciences along with rendering these disciplines as part of a greater destiny, Arslan gained his reputation by translating works including the most distinguished ones on Heidegger. He emphasized the importance of translation and translated many works from English to Turkish. By doing so, Arslan brought to the Turkish reader numerous books on philosophy and sociology.

Life teaches us the following: the beginning determines the end. Life goes on as it has begun. Therefore, it’s important to start strong. Looking at Arslan’s biography, we can see that he has emphasized the importance of translation since the beginning of his academic career.

“Turkey is a good mill. It grinds all, valuable and worthless alike,” said Husamettin Arslan. Arslan’s emergence as a translator was in the late 1980s. After many years in which hope was consumed by disappointments and realizing that his consequent translations did nothing but serve other intellectual circles, Arslan found his own way – the Paradigm – which are verified by his relatives and the chronological listing of his works.

Because of its content and approach, the distinct Epistemic Community became a sensation especially among intellectual circles. It still continues to be cited by numerous academic and non-academic works. Arslan always insisted that the intellectual class in Turkey was a monopoly. In this respect, it’s definite that the critical intellectual circles in Turkey have learned a lot from his translations and works. So, let me say this about the politics of translation: Tell me the translations you’ve read, and I’ll tell you what you’re not.

Praised by Arslan, Terry Eagleton claimed that the cultural clash in the world began after the Cold War. Meanwhile, Arslan was aware that Turkey had been going through a cultural clash since the beginning of the country’s modernization. As a Turkish intellectual, he grasped that one of the most essential issues of the country remained unsolved in the face of the following question: “How can we be ourselves while modernizing and adopting modern ideas?” In this respect, Arslan was the elder version of late Mehmet Kucuk, as they were both translators who admired postmodernist thinkers. This is a fair comparison considering the fact that Arslan left ‘Epistemic Community’ while Kucuk left ‘Contingency Theory’ as their legacies.

Arslan believed that Terry Eagleton, who had a Catholic background, would have a better chance of understanding Turkey. More, he deemed it important that Eagleton defined himself as a heterodox, thus, a traditional Marxist. Yet, Arslan was unable to agree with Eagleton on postmodernism. He never refrained from saying the following about Eagleton: “How can we remain ‘socialists,’ ‘democrats,’ ‘conservatives,’ or ‘rightists’ in a world in which postmodernists exist and where Derrida wrote numerous books and Lyotard’s books are still being read? How can we be leftists when Foucault’s works are here? We cannot. We cannot live in spite of thinkers called ‘postmodernists.’ I wonder how Eagleton could continue to be an old-school Marxist in spite of Derrida, Foucault or even ‘postmodern Marxism.’”

Years later, Husamettin Arslan understood that his father, who gained all his knowledge with the hardships of life, had a fragile heart. When he started to realize that he was transforming into his father after 35, his intellectual interest deviated. For instance, he asked whether Novalis’s “all returns are to home” referred to becoming your own father. He experienced that sons always tried to become something else with the energy bestowed by youth. However, also saw that those very sons began to transform into their fathers when their energies were depleted by the hardships of life and personal obstructions. In this sense, it’s possible to summarize Arslan’s two characteristics with two Russian novels: Turgenev’s Fathers and Sons and Dostoyevsky’s Demons. Russia is synonymous with literature, but we failed to create it. We have to think about this: first with Arslan’s ‘Baban Olsun…’ article, which talks about his father, and second through his translations. Of course, we’ll have a better opportunity in understanding this when his journals, which reflect the search for perceiving the world through an ontological lens, are published.