Even though there has been a decrease in the number of arrivals, EU member states seem to be reckless about resettlement. 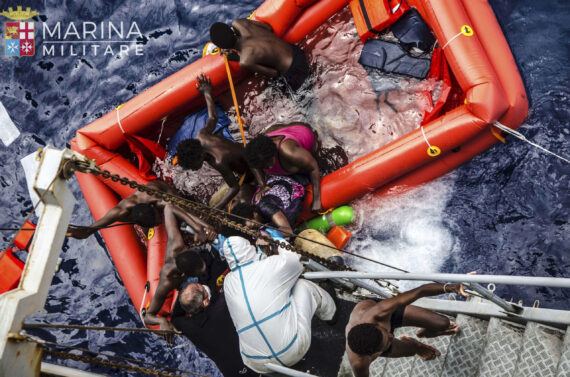 Refugees stands in a boat as ships of Italian Navy rescue refugees from an overcrowded boat which was about to capsize at Sicilian Strait, between Libya and Italy, in Mediterranean sea on May 30, 2016. Anadolu Agency

The refugee crisis that reached its peak in 2015 was recorded as a serious test for both Europe and the rest of the world. In this two-year period, millions of people have crossed borders to save their lives, and thousands have drowned in the Mediterranean Sea. Many international organizations, particularly the United Nations, are urging governments to take immediate action in order to secure a safe and sustainable life for these people.

The need for resettlement

Resettlement is a tool that offers protection for those most at risk and to ensure more efficient international responsibility sharing. It involves the relocation of refugees from a country of asylum to a country that has agreed to provide them with protection. According to the UN High Commissioner for Refugees, approximately 1.4 million refugees will need resettlement in 2019. In this context, the UNHCR set its annual resettlement target at 170,000. This of course does not meet the real needs. Given that the target was 100,000 in 2015 and 143,000 in 2016, theoretically speaking, we can still talk about a positive development. However, it also needs to be stated that less than 5% of resettlement needs were met last year.

“Resettlement is now more important than ever as a solution, and we must grasp this opportunity to increase the number of refugees benefitting from it, as well as other avenues for admission.” These words of High Commissioner Filippo Grandi means that the international community is aiming to improve both resettlement and refugee acceptance processes by applying pressure on governments. However, the extent to which these goals can be achieved is of course a question that should be kept on the agenda.

The refugee crisis that reached its peak in 2015 was recorded as a serious test for both Europe and the rest of the world.

The European migration crisis and its effects

The number of countries with a resettlement program was 14 in 2005 and this figure rose to 37 in 2016. These countries included the U.S. and EU countries such as Austria, Belgium, France, Germany, the United Kingdom, and Sweden. Considering that most migration movements originating from Asia and Africa are directed towards Europe, it can be stated that the responsibility of EU institutions and member states has increased. The process that began in 2015 when the internal conflict in Syria reached its peak has been described as the “European Migration Crisis.”

The famous EU-Turkey deal, based on the Joint Action-Plan (JAP) pertaining to the re-admission of irregular migrants to Turkey, has sparked off debates around the new EU strategies on migration management. Its implementations and commitments, in a way, directly affects EU-Turkey relations that have followed a fragile line for a long time.

In 2014, it became known that 216 thousand people reached European shores through the Mediterranean and this number exceeded 1 million in the following year. Both with the EU-Turkey Deal and the closure of the “Western Balkan Route,” the eastern Mediterranean crossings have significantly decreased. So, in 2016, the number of people that reached Europe via the Mediterranean remained at 362 thousand. It is estimated that 140 thousand migrants crossed over to Europe with this route in 2017. Even though there is a significant decline in the number of annual arrivals, there is a fact that news is often trivial: human life. According to official figures, at least 15 thousand people have lost their lives since 2014. Considering undetected accidents, this number is considered to be much higher.

“Over the past four years the EU has made significant progress with tangible results in addressing the challenge of migration. In very difficult circumstances, we acted together. Europe is no longer experiencing the migration crisis we lived in 2015, but structural problems remain. Member states have a duty to protect and care for those they shelter. Continuing to work together through a comprehensive approach, in solidarity, and with a fair sharing of responsibility, is the only way forward if the EU is to be equal to the migration challenge.”  These words belong to the Vice-President of the European Commission, Frans Timmermans. Ahead of the European Council in March, the Commission is today taking stock of progress made over the past 4 years and setting out measures still required to address immediate and future migration challenges. The Commissioner for Migration, Home Affairs and Citizenship,

Dimitris Avramopoulos, said: “The results of our common European approach on migration speak for themselves: Irregular arrivals are now lower than before the crisis, the European Border and Coast Guard has brought joint EU border protection to a new level and together with our partners we work on ensuring legal pathways while stepping up returns. Looking ahead, it is essential to pursue our common approach but also to complete the ongoing reform of the EU’s asylum system.”

In an environment where millions of people were displaced and left their countries with the fear of being killed, the EU resettlement program only managed to reach 50 thousand in three consecutive years. In this three year period, arrival figures have been falling and currently levels are a mere 10% of what they were in 2015. In 2018, around 150,000 irregular crossings were detected across EU external borders.

In an environment where millions of people were displaced and left their countries with the fear of being killed, the EU resettlement program only managed to reach 50 thousand in three consecutive years.

Even though there has been a decrease in the number of arrivals, EU member states seem to be reckless about resettlement. Considering the fact that Turkey is currently home to over 3.5 million refugees, it is obvious that there has been no concrete progress in burden sharing. In February this year, President Erdogan stressed this matter once again and added that Turkey has spent over $37 billion of its own national resources in sheltering refugees.

The international community and European leaders should realize that the status quo is not sustainable. In this sense, in addition to increasing financial support to Turkey, concrete steps towards resettlement should also be on the agenda. With the increasing tension in Syria and other crisis areas, new waves of migration may occur. In such a case, leaving all responsibility to Turkey will not be fair and will lead to grave consequences for Europe.