The Rise and Fall of FETO in Turkish Politics

FETO, a religious criminal cult and led by the US based cleric Fetullah Gülen, is a bizarre political phenomenon. It is ostensibly a religious community located in civil society, yet in reality it is a shady and aggressive organization whose activities and political ambitions can easily be branded as terroristic. It has a definitely Janus-faced structure, which can only be grasped by understanding the context of secular authoritarianism in Turkey. Indeed, FETO has found fertile ground to blossom within a social order where democratic politics had been precluded. 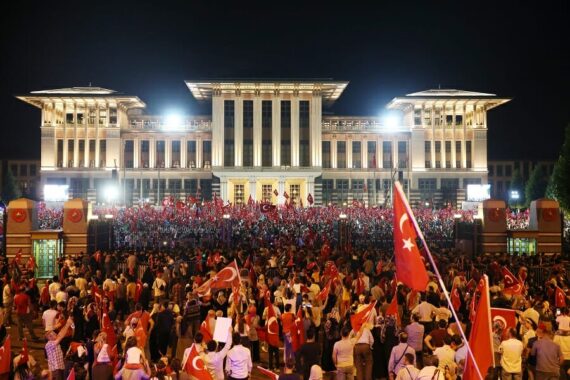 FETO, a religious criminal cult and led by the US based cleric Fetullah Gülen, is a bizarre political phenomenon. It is ostensibly a religious community located in civil society, yet in reality it is a shady and aggressive organization whose activities and political ambitions can easily be branded as terroristic. It has a definitely Janus-faced structure, which can only be grasped by understanding the context of secular authoritarianism in Turkey. Indeed, FETO has found fertile ground to blossom within a social order where democratic politics had been precluded.

The collapse of an ancient Ottoman regime and traditional socio-political structures in the 1920s precipitated a feeling of identity loss in Turkish society. This trauma was exacerbated with the establishment of an oppressive secular authoritarian regime in the following decades. More specifically, the erection of republican regime in 1923 was to bring a radical change in the symbolic order of the society. The break with the old order created a political situation within which both a democratic and an authoritarian order could take hold.

A democratic regime refers to a political order within which the place of power is kept indefinite and open, which means that power is open to all political actors and none of them can occupy it forever. An authoritarian regime, on the other hand, comprises the closure of the place of power to societal opposition and identifying it with a quasi-transcendental ideological content. This cancels out the contingent nature of power, thus renders democracy obsolete.

The young Turkish Republic took the latter path. The secular bureaucratic elite monopolized power in their hands by pushing aside the political opposition and identify the place of power with secular-nationalist ideology. This authoritarian political order formed around single-party rule with no popular elections. Besides, the bureaucratic elite by deploying the state’s enormous power embarked on a systematic policy of “purifying” the society in line with its secular-nationalist ideology.

The Democratic and Authoritarian Options

In the face of this authoritarian turn, society has reacted in two alternative yet competing forms of political struggle. One of these has taken the path of forcing the authoritarian regime to democratize by dislocating the bureaucratic elite from the state apparatus. This has served to empty the place of power by consolidating and enlarging the sphere of democratic politics, where agonistic political actors can compete freely, vis-à-vis the bureaucracy.

The Democratic Party in the 1950s, the Motherland Party in the 1980s, the Welfare Party in the 1990s and lastly the AK Party in the 2000s have walked thorough this path and struggled to restore the democratic republican ideals of 1923. This democratic option has evolved in three steps. First of all, it has sought to establish and sustain a multi-party political system with free elections. This was achieved in 1950 and despite intermittent suspensions it has been maintained since. Secondly, it has strived to roll back the civil and military bureaucracy’s influence in the political system through democratic reforms. This took place in the 2000s. Lastly, it has struggled to institutionalize a governmental system that assured to materialize the democratic republican ideals. This was carried out in April 2017.

The other strand of political struggle has parted significantly from the democratic option in terms of its ways and political objectives. It has mainly sought to conquer the state from within by infiltrating it thorough various channels. Its course of action has followed the objective of controlling critical state institutions, expanding aggressively in the sphere of civil society and infiltrating into political parties by using whatever means necessary. Thus, its main objective is to replace the secular authoritarianism with a seemingly more society-friendly and conservative one. Instead of keeping the place of power empty, this obscurantist form of politics tends to fill it with other content and block the opposition.

FETO represents this authoritarian option. It has taken advantage of alienation and the widening gap between a relatively conservative society and the oppressive secular regime. It has considerably succeeded in channeling society’s energy and frustration against the authoritarian state. Moreover, society’s resentment has escalated after each incident of military and civil bureaucratic intervention in democratic politics in the second half of the twentieth century. These interventions have weakened some segments of society’s backing for the democratic option in its struggle to bring the oppressive regime down and geared them to shift their loyalty to FETO’s authoritarian option.

The 2000s witnessed an extensive democratization process. It extended political and cultural rights and freedoms to the ostracized sections of society. It achieved democratization in civil-military relations. It enhanced economic and cultural equality to a degree and thereby boosted the standards of political participation. All these boiled down to the dislocation of secular bureaucratic actors and secular-nationalist ideology from the state.

This was a critical development for Turkish democracy. At last, the essential criterion of a democratic regime was in place: the place of power has grown empty. Yet the occurring vacuum in this transition posed a great danger for it would be abused by political forces that had no respect for democracy. This was what happened in Turkey in the 2000s. FETO took advantage of the displacement of secular-nationalist actors from the state apparatus. Thus, the 2000s testified to two synchronized and opposing developments. The AK Party-led democratic bloc struggled to democratize the political system in the face of the secular-nationalist status quo whereas FETO accelerated its policy of infiltration and invasion of the state institutions and capturing control of civil society.

Since the struggle between the democratic bloc and the secularist status quo lay at the center of political struggle and FETO’s capability of manipulation through its vast sources of media outlets and control of the intelligence, FETO’s invasion of the state went unnoticed by both the AK Party and the larger public, or not taken seriously enough till the threat it posed to Turkish democracy reached a critical stage. Indeed, FETO, a religious criminal cult, cloaked its real intention and activities behind a discourse of democracy, peace and dialogue and skillfully presented itself as a benevolent force.

FETO’s Path to the Coup

FETO, which had struggled for almost four decades to get hold of the state, now found itself in a situation where the AK Party blocked its long-term political objectives. Controlling the majority of the state apparatus, FETO has endeavored to push the AK Party aside by deploying various discourses and strategies in the period of 2010-2016.

One method was that FETO was at pains to show Turkey has become an authoritarian or “one-man rule” country under the AK Party rule. For example, the discourse of polarization and authoritarianism peaked during the Gezi protests in June 2013. FETO motivated and manipulated this incident to de-legitimize and marginalize the AK Party in both the society’s and the international community’s eyes.

FETO also sought to portray that the AK Party had been involved in terroristic activities by especially alleging that it harbored and supported terrorist groups such as DAESH. It attempted to create an image that Turkey had become a rogue state under AK Party rule. This was meant to bring then Prime Minister Recep Tayyip Erdogan before the International Criminal Court. For this aim, FETO-affiliated officers stopped a truck which was owned by the National Intelligence Organization (MIT) in Adana in January 2014. FETO’s media outlets leaked news that it was loaded with weapons that were sent to so-called terrorist groups in Syria.

Moreover, FETO tried to portray the AK Party as a deficient power that failed to rule the country. In order to fuel a psychology of insecurity in society and to alienate the electors from the AK Party before the upcoming local elections in March 2014, FETO-affiliated prosecutors filed lawsuits against the AK Party, accusing some high-ranking party members of organized corruption, in December 2013.

Failing in all these attempts, FETO resorted to military intervention. FETO-affiliated officers attempted to take hold of the government, attacked key security buildings and the Turkish Parliament, and killed 250 people during the attempted coup on July 15, 2016. Yet the coup attempt was foiled by a heroic civilian resistance.

On 20 June 2016, Parliament declared a state of emergency, which has started an extensive purge of FETO members from the state apparatus. It has also dealt a deadly blow to its financial and human resources base. Many FETO members have been jailed or fled the country. This crackdown on FETO has devastated its organizational structure and its morale.

This figures as much a crucial development as the discard of the bureaucratic elite from the place of power for Turkish democracy. The disqualification of two authoritarian options consecutively in the last two decades has prepared a suitable ground for the country’s flourishing democratic regime. Today Turkey opens up a new page in its political history. It needs to restructure the state apparatus and bring its political system in line with democratic norms. The main challenge in front of the AK Party is to lead and complete this historic process.