According to observers, the Hindu nationalist rhetoric and the electoral marginalization of Muslims are two of the reasons why India has been falling behind on human rights and representation in democratic institutions. 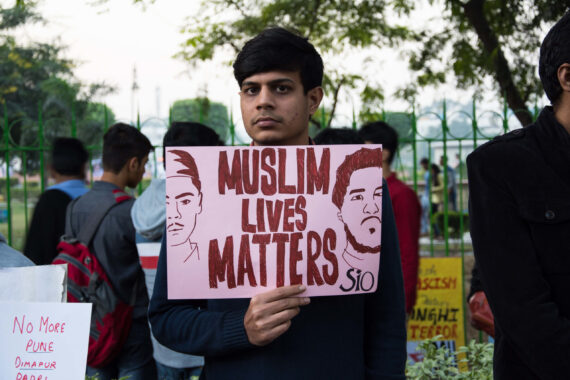 A man holds a banner as people gather outside the central park to take part in the Muslim lives matter campaign in response to the barbaric murder of a Muslim worker in Rajasthan and against the frequent target killings of Muslims took place in New Delhi, India on December 09, 2017. Anadolu Agency

Hindu nationalism has been on a rapid rise since 2014, reaching its recent peak in the last 2019 general elections. The nationalist BJP won two elections in 2014 and 2019 respectively, which raised concerns among minorities about the increasing racism coinciding with the rise of Hindu nationalism.

Back in the 1950s, Hindu nationalism was a marginal ideology. When the predecessor of the BJP, the Bharatiya Jana Sangh, contested its first election as a Hindu nationalist party, it only obtained 3 percent of the vote and 3 seats in parliament.

Hindu nationalism has never been stronger than it is now. The ruling BJP managed to obtain 282 out of 543 seats in parliament in the 2014 general election. This number increased to 303 seats in 2019, ensuring a majority for two periods respectively.

Narendra Modi is accused by many people for seeking votes by raising and stroking fear among the Hindu majority of the potential dangers posed by the presence of a large Muslim minority in India.

The saffron-clad Yogi Adityanath chief minister of one of the biggest Indian states Uttar Pradesh had spoken about a “green virus” in referring to Muslim voters who he said were being wooed by opposition parties.

Since India’s independence, Indian Muslims have largely backed secular formations like the Congress, SP, BSP, Trinamool and RJD. But while these parties have spoken about protecting Muslim interests, they have been less forthcoming in giving them proportional representation.

The loss of faith in Congress and the subsequent failure of regional secular parties have resulted in the growth of several Muslim-centric parties such as the AIMIM, the Indian Union Muslim League and the All-India United Democratic Front. However, these parties have remained region-specific and have obtained only 4 seats in the 2019 Lok Sabha elections.

Although Muslims comprise 14 percent of India’s population, the representation of Muslims has been gradually declining, as the BJP gained a majority in the last two elections.

In 2014, BJP became the first party to win a simple majority and to not have any elected Muslim MP. Later, Narendra Modi introduced one Muslim MP in 2019.

As Hindu nationalism is powerful than it has ever been before, it is raising concerns about the increasing hate crimes against Muslims and other minorities in the country.

In the past 5 years under Modi’s rule, 44 people have been lynched- most of them Muslims- according to a report by Human Rights Watch.

In its annual report, United Nations Human Rights chief Michelle Bachelet raised concerns over “increasing harassment and targeting of minorities – in particular, Muslims and people from historically disadvantaged and marginalized groups, such as Dalits (formerly known as untouchables).”

Amnesty international has called Indian authorities to ensure that there is no impunity for those responsible for public lynching and other hate crimes against Muslims in several states.

However, it seems these calls have not been taken seriously by the government. Just a day after a 79-year-old activist was lynched, the BJP’s state urban development minister CP Singh said, “I think he sponsored an attack on himself. He is a huge hypocrite. He talks against Hindus, makes anti-national comments, supports Kashmiri separatists and Naxals.”

According to observers, the Hindu nationalist rhetoric and the electoral marginalization of Muslims are two of the reasons why India has been falling behind on human rights and representation in democratic institutions.