Total US humanitarian funding for internally displaces people in Myanmar and refugees since last October now stands at $95 million. 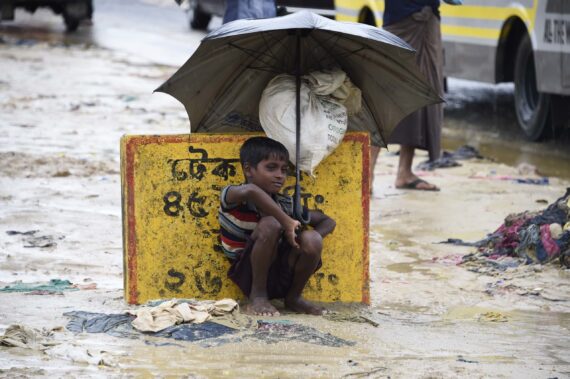 A young Rohingya refugee shelters from the rain with an umbrella while sitting at Kutupalong refugee camp in the Bangladeshi locality of Ukhia on September 19, 2017. AFP

Since August 2017, the crimes taking place against the Rohingya have once again gained an international dimension.

The Rohingya, which has been described by the United Nations as the world’s most persecuted peoples, have faced heightened fears of attack from the Myanmar military and Buddhist mobs since 2012.

In latest reports, the UN has documented mass gang rapes, killings – including infants and young children – brutal beatings and disappearances committed by the security personnel.

UN investigators have also labelled such violations as crimes against humanity.

Since the beginning of the outbreak of the crisis, the government of Turkey has led the way in providing humanitarian aid to the refugees that have crossed the border to Bangladesh. Latest reports state this figure to be around nearly 400,000, while approximately 3000 Rohingya have lost their lives on their struggle to escape the violence.

After the visit by TIKA, assisted by First Lady Emine Erdogan, where 1,000 tons of aid was delivered to the Rohingya Muslims who had fled violence, President Erdogan raised the issue at the UN General Assembly claiming that the international community has remained silent once again “just like it did in Syria.”

While the de facto leader of Myanmar, Aung Sang Suu Kyi, a former Nobel Peace recipient did not attend the UN General Assembly due to increasing criticism from the international community, she said on Tuesday that her government will grant access to international observers in the conflict-hit Rakhine state.

While official statements indicate an open investigation and freedom to provide aid, the Myanmar government have reported attempts of Buddhist mobs to destroy a ship carrying aid to the displaced people in western Rakhine.

According to a press release from Suu Kyi, the riot began on Wednesday when around 50 people forced staff of the International Committee of Red Cross (ICRC) to unload the aid from a ship at a jetty in Rakhine state capital Sittway.

8 people have been detained for interrogation after police dispersed a crowd comprising around 300 people by firing warning shots and water cannons.

US to provide aid to those displaced

While British Prime Minister Theresa May announced earlier this week that the UK government will stop providing military assistance and training to the Myanmar army, the US announced on Wednesday that it would provide nearly $32 million in humanitarian aid in order to help address the ongoing Rohingya crisis.

“The rapid influx of hundreds of thousands of refugees has stained resources and overwhelmed humanitarian agencies and local authorities,” the US State Department said in announcing the new funds.

The aid will provide a range of needed services including emergency shelter, food, water and health assistance.

Further, the statement by the State Department added that “the United States calls upon all parties to allow for unfettered humanitarian access to people in Rakhine State, Burma [Myanmar], and we also encourage other donors to join us in providing additional humanitarian assistance for those affected by the crisis.”

Total US humanitarian funding for internally displaces people in Myanmar and refugees since last October now stands at $95 million.