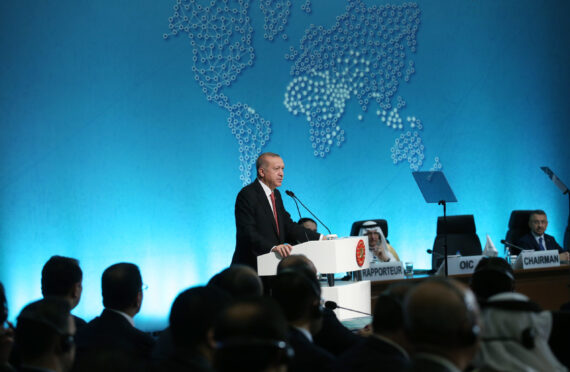 President of Turkey, Recep Tayyip Erdogan (C) speaks at the 34th session of the Standing Committee for Economic and Commercial Cooperation of the Organization of the Islamic Cooperation (COMCEC) at Istanbul Congress Center on November 28, 2018 in Istanbul, Turkey. Anadolu Agency

Speaking at the 34th Standing Committee for Economic and Commercial Cooperation of the Organisation of Islamic Cooperation (COMCEC) in Istanbul, President Erdogan gave important messages from regional unity in the Muslim word to reform in the United Nations.

In addition to hegemony in global trade, Erdogan also touched upon the “dirty games” pursued by some in the international system in order to set Muslims against each other. He also added, “We should no longer fall into the traps set up by those who act with the logic that a drop of petrol is more valuable than a drop of blood.”

Reforming the UN and war in the Middle East

Before commenting on the current humanitarian situations in Palestine, Syria, and Yemen, President Erdogan re-emphasized his call that urgent reform is required in the United Nations. Known for his motto “the world is bigger than five,” Erdogan called for all members of the UN to have a seat on the Security Council by stating, “All members of the UN must be entitled to be permanent members.”

Moving on to the Middle East, Erdogan argued that the scheme of ‘Great War’ is the reason behind the civil wars, crises, and conflicts in the Muslim world. Criticizing U.S. policies, President Erdogan added that “We will oppose the creation of any new “terror states” in our region by the pretext of Daesh.”

Commenting on terror in the global sense and the unresolved conflict in Syria, President Erdogan said, “We will put things in order in the Syrian conflict, not others. From Berlin to Paris and Brussels to Moscow, we will oppose the murder of innocents by terrorists. We will encourage our citizens to visit Jerusalem and prevent occupiers to turn off the candles of Jerusalem. We will be the first ones to say no to terrorist organizations like FETO, the PKK, and Al-Qaeda, and will not allow them to darken our future. We will increase our voice against oppression and injustice before anyone else.”