Reproducing anti-Erdogan discourse has become the Sisyphean task of the CHP in order to cover the failure of the party. 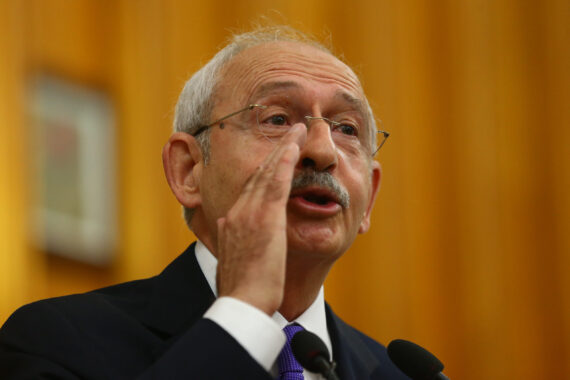 Chairman of the Republican People's Party (CHP) Kemal Kilicdaroglu makes a speech during his party's group meeting at the Grand National Assembly of Turkey in Ankara, Turkey on November 13, 2018. Anadolu Agency

Since the candidate selection process of political parties for the local elections to take place in Turkey in March are almost finalized, parties are working on their election campaigns to attract voters. While the AK Party is about to announce the rest of its candidates, CHP is working on completing its candidate list by the end of January. Parties have already started heating up the election atmosphere by underlining the vital importance of these elections for their existence in the political arena. The discourse adopted by political parties gives us a clue about the competitive election campaign that is awaiting all of us.

The AK Party and the MHP take the elections very seriously and relate it to the consolidation of the presidential system. Both political parties have been working together for the consolidation of Turkey’s new system of governance since its approval in April 2017. One of the motivations of these parties in this task is preventing economic and security-based manipulations rising in political instability. It’s a well-known fact that the chief purpose of the opposition parties is to win Istanbul, Ankara, and Izmir in order to discredit the new presidential system. Due to this, it is not surprising to see that all political parties have a consensus on the vitality of March 31 being more than a local election.

The chief purpose of Turkey’s opposition parties is to win Istanbul, Ankara, and Izmir in order to discredit the new presidential system.

When it comes to the CHP, the party has had a hard time in convincing party circles about the selected candidates. Some candidates have been criticized by the party due to their inconvenience with the party’s values. More, these circles are not satisfied with the content of the alliance between the CHP and Iyi Party and have announced this discomfort fiercely.

On the other hand, the CHP’s administration was quite disturbed about these critiques. Since intra-party opposition is powerful within the CHP, it’s obvious that party officials are refraining from the re-emergence of intra-party opposition before and after the elections. As a result of this hesitation, the party has focused on reproducing anti-Erdogan discourse, which they feel more secure with.

Why does the CHP want to build its campaign on an anti-Erdogan discourse? The CHP administration is having a hard time to convince party circles about the alliance candidates, some of whom have been criticized for their inconvenience with the party’s values.

Why does the CHP want to build its campaign on an anti-Erdogan discourse? Answering this question requires taking a look at events that occurred last year. After the June 24 elections, the CHP has faced serious intra-party opposition. While Kilicdaroglu was forced to resign from chairmanship of the party, he denied his failure in the elections by blaming the AK Party and President Erdogan. According to the CHP chair, Erdogan had failed in the elections and that he is not a legitimate president. Kilicdaroglu attempted to de-legitimize Erdogan’s leadership in order to prevent the questioning of his chairmanship within the CHP.

CHP circles have utilized the slogan “not my President,” firsy used in the U.S. against Trump, in order to question the legitimacy of Erdogan’s leadership in Turkey. This action proves that reproducing anti-Erdogan discourse has become the Sisyphean task of the CHP in order to cover the failure of the party.

Thus, it is known that the possible failure of the CHP in the local elections will re-trigger intra-party opposition. Kilicdaroglu has chosen to form his local election campaign on anti-Erdogan discourse in order to secure his position and to prevent any question about the role of chairmanship. CHP circles, including Kilicdaroglu, have utilized the slogan “not my President,” which was also used in the U.S. against Trump, in order to question the legitimacy of Erdogan’s leadership in Turkey. This action proves that reproducing anti-Erdogan discourse has become the Sisyphean task of the CHP in order to cover the failure of the party.