The Story of An Impeached-Yet-Still-Winning President: Donald J. Trump

Trump won’t face any serious harm from the impeachment case, the opposite of what the Democrats had expected from the beginning. The real question was never "who is right?" in this political drama, it’s always been "who is going to close the ranks with their constituents better?" Trump did. 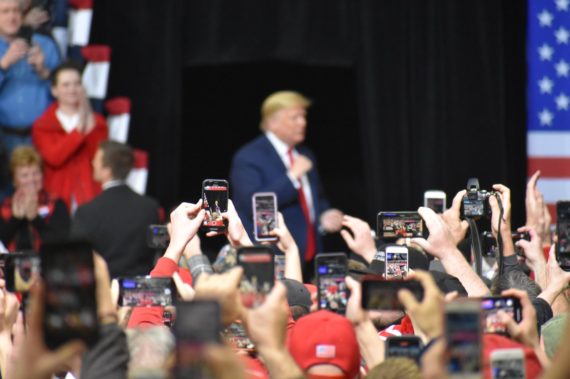 Republican President Donald Trump has seemed to manage leading the presidential race for the 2020 elections despite the fact that he is now the third president ever impeached in U.S. history. He was impeached in the Democrat-controlled House, yet it’s almost certain that he will be acquitted in the Republican-controlled Senate. While Democrats would expect Trump to be hurt by the impeachment story ahead of the 2020 elections, Trump could convert it into a tool to unify Republicans. Only time will tell who will win this highly partisan political game in Washington, yet Trump seems to be one step ahead of his Democratic rivals.

The story began on September 24, 2019 with an announcement by Democrat House Speaker Nancy Pelosi revealing an official impeachment inquiry against President Trump. Pelosi accused Trump of pressing Ukrainian President Vladimir Zelensky into digging up damaging information on his likely Democratic rival, Joe Biden, and his son, Hunter Biden, in return for releasing $400m of military aid. Democrats claimed that this was a “quid pro quo”, and was enough to impeach the president since he allegedly used his presidential power to gain personal advantage against his likely rival.

The Democrat-controlled House quickly kicked off the impeachment inquiry in early October. The House Intelligence Committee, the Oversight Committee and the Foreign Affairs Committee have all taken depositions from key people involved in the Ukraine affair. On October 31, the House approved a resolution formalizing the procedures of the impeachment inquiry. On November 13, public impeachment hearings in the Intelligence Committee were broadcasted on television. On December 4, the House Judiciary Committee took the stage, holding two different hearings on how to impeach President Trump. On December 12, the committee approved two articles of impeachment, accusing Trump of abusing of power and obstructing Congress.

The House impeached the president

It was on December 18, 2019 that President Trump became the third chief executive in U.S. history to be impeached after a vote in the House of Representatives that was closely divided by party lines. The two articles of impeachment: abuse of power and obstruction of Congress, have been sealed in the House and were supposed to be sent to the Senate, where they would be tried. Yet, shortly after the House approved the measures House Speaker Pelosi indicated she would hold off on sending the articles to the Senate until the chamber clarified its rules. Pelosi’s holding off was yet more evidence proving the lack of confidence between the two parties. Finally, the House voted to transmit the two articles of impeachment to the Senate on January 15, 2020. Speaker Pelosi named the seven lawmakers (House prosecution managers) who will prosecute President Trump’s impeachment trial in the Senate. The team led by House Intelligence Committee Chairman Adam Schiff, was formed of house representatives Jerry Nadler, Hakeem Jeffries, Jason Crow, Zoe Lofgren, Val Demings and Sylvia Garcia.

The Senate took the wheel

As the measures were transmitted to the Senate, the chamber immediately began the formal impeachment procedures. The official impeachment trial of Trump began on January 16 as Schiff read aloud the two charges in the Senate. On this day, the Senate was turned into a court as the Supreme Court Chief Justice John Roberts was sworn in as the “head of the court”, and the senators were sworn in as the “jury”.

Everything dramatically changed once the Republican-controlled Senate took charge of the impeachment trials. The Senate laid out the rules that will govern the impeachment trials on January 21. After 13 hours of deliberations, senators voted for the rules that Senate Majority Leader Mitch McConnell unveiled a day earlier. According to the approved rules, House prosecution managers have 24 hours spread over three days to make their case before Trump’s defense team has its turn. As the prosecutors finish their opening arguments, Trump’s defense team would kick-start a new three-day cycle. After arguments are completed, senators will have up to 16 hours to ask questions of both teams, which must be submitted in writing to Roberts.

Afterwards, the Senate will be able to vote if it would seek to call witnesses in the trials, a key demand made by Democrats who want to see several top current and former officials take the stand, including former National Security Advisor John Bolton, and Acting Chief of Staff Mick Mulvaney. Yet this scenario seems very unlikely since the Republicans have not supported calling new witnesses.

This whole proceeding will only be heading to one particular and inevitable destiny: voting on the two articles of impeachment in the Republican-controlled Senate. In the current Senate, the Republicans have a majority of 53 senators over the Democrats 47. Since convicting the president needs at least 67 senators, basic arithmetic makes it clear that the likelihood of the Democrats being able to convict the president and remove him from office is almost impossible.

At the end, Trump wins

The complicated story of President Trump could be make for an interesting movie that would draw millions to the theaters. Yet the real story doesn’t get much attention since almost everybody knows how it ends—Trump will be acquitted in the Senate.  If everybody knows this, then the Democrats must have definitely known it from the beginning. Then the question arises: Why did they begin their efforts to impeach President Trump? The major factor in this whole impeachment “game” has always been about the 2020 presidential elections.

As the Democratic hopefuls struggle to gain momentum in the presidential race, President Trump still stands as the sole Republican candidate. His administration has been undertaking successful economic agenda, which has been the main driver of support amongst constituents, tracking a strict immigration policy, and a confusing foreign policy. After their defeat in 2016, the Democrats focused on investigating claims of Russian interference in the US elections, hoping to severely harm Trump, yet the outcome was not as they had hoped, and Trump’s position remained largely untarnished. Ahead of the 2020 presidential elections, the Democrats have been forced to take action against Trump, as they have not been able to find their best candidate yet. They felt they should roll the dice, otherwise they wouldn’t find stronger damning evidence: That’s why they preferred to play the “Ukraine game”. The trials in the Senate will end soon and Trump will be acquitted. Afterwards a new political game will begin in Washington as both Democrats and Republicans try to rally their own constituents.

The Impeachment case seems to have given President Trump an opportunity s to unify the Republicans who had voted for him in 2016. He knows how to play victim better than the Democrats and his rivals have not gained enough momentum to beat Trump at the ballot box. It might still be too early to call the election results, but it is certain that Trump won’t face any serious harm from the impeachment case, the opposite of what the Democrats had expected from the beginning. The real question was never “who is right?” in this political drama, it’s always been “who is going to close the ranks with their constituents better?” Trump did.

Hakan Copur received his BA from Istanbul Bilgi University and completed his MA at Marmara University. After 5 years at public service, he started to work for Anadolu Agency Washington Bureau in 2015. Has been assigned as the Editor of Americas News in 2019.