Refugee crisis is putting the EU into a difficult position for two main reasons: the number of the refugees keeps growing xenophobic and Islamophobic political parties grow stronger in every election. 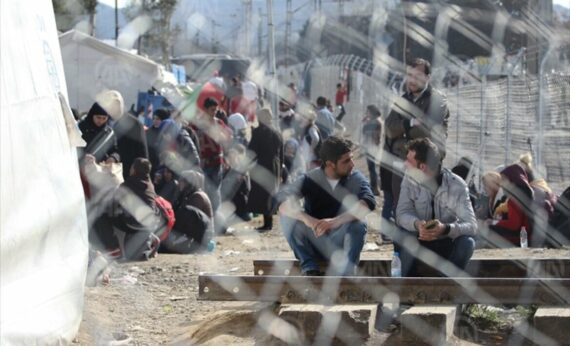 The Syrian Civil War has begun in 2011 during the process called the “Arab Spring” which has destabilized an immense geography from Libya to Afghanistan, passing from Egypt, Yemen, and Iraq. What is going on in Syria has added up to this destabilization.

This huge problem is causing humanitarian dramas every single day, it has already provoked a terrible refugee crisis and it has also made a number of countries to fight with one and other through proxy wars.It is estimated that more than five million Syrians have already fled their country and many of them are in Jordan, Lebanon, Iraq and Egypt. We should stress, however, that more than 2 million of these people are currently in Turkey.

10 % of these refugees want to go to Europe and more than 500 thousand Syrians have already reached Europe by every means imaginable.Of course, all refugees fleeing into Europe are not Syrians, there are many Iraqis and Afghans among them, as well. Some of these refugees have been received into Europe in a more or less organized manner, according to quotas established by individual countries.

For example, France had accepted 5000 Iraqis and 5000 Syrians; while Germany had accepted 45 thousand people. Let’s remind that at least 2 million people have applied to become refugees, and 40 % of them want to live in Germany if their demand is accepted.

In the meantime, the EU is trying to make its members accept around 20 thousand refugees in an equal manner. But all this is happening while thousands of people keep coming into Europe on a daily basis. It is hard to know for sure have many people are risking their lives to get to the European shores, but as an example, only in July 2015, 180 thousand people were recorded as refugees trying to leave Turkey and reach Europe.

Refugee crisis is putting the EU into a difficult position for two main reasons: first, the number of the refugees keeps growing and there are now many member states who consider “building walls” as the only way of protection. Second, because of the refugee flows, xenophobic and Islamophobic political parties grow stronger in every election. It is true that terrorist attacks committed by people from the Middle East is increasing as well, and that only exacerbates fears toward immigrants.

The crisis in Syria has also impacted inter-state relations. As you may remember, Russia has first reacted to the West’s policies by destabilizing Ukraine and used this crisis to expand the Russian influence towards Eastern Europe, Black Sea and Western Asia. Now Russia is using the crisis in Syria to reinforce its presence in the Eastern Mediterranean. It is like Europe was being surrounded from the East. That’s why it was urgent for the EU countries to make a number of strategic decisions.

Not all EU countries, but at least those like Germany who feel on them growing pressure from the immigrants – and from Russia, had to give their decisions. The EU institutions as well have encouraged member states to make up their minds on two essential matters. First, where to stop the immigrants? Second, how to manage the new relationship with Russia?

It is not easy for the EU to make decisions on these two critical matters, and it is especially hard to decide whether or not to have a tense relationship with Russia or a cooperative one. About the migration flows, the EU had thought to not let them come into Europe and stop them in the EU-Turkish border. So they asked Turkey to keep the immigrants in the Turkish soil whatever the price may be. About Russia, they have chosen not to deteriorate the relations further with this mighty neighbor.

When they have elaborated these decisions, European leaders didn’t really ask themselves why Turkey would accept to keep the immigrants in its country. Besides, Russia’s actions in Syria has made it difficult for the Europeans to develop security, trade and energy cooperation with this country as if nothing has happened. That’s why the EU countries have begun thinking more seriously about Turkey.

The EU has urged Turkey to do anything possible to stop those people who keep coming from the East, and to make sure they won’t try to leave Turkey. In order to help Turkey to fulfill this task, European leaders have agreed to give financial and technical assistance. The problem is, whatever one may do, nobody can really stop these people determined to leave Turkey and reach the European shores.

So the EU had soon realized that Turkey can’t stop all the people who want to come to Europe even if it wanted to, that the migration flows will continue and besides, that Europe was no longer able to give more money to Turkey.

This is when the EU has understood that it is time to give “the” strategic decision: it was obvious that it is better to treat Turkey as a candidate country who can one day join in the European Union, rather than as a random neighbor country.

Turkey and the EU have begun once again to treat each other as partners who discuss about ways to deepen their relationship, mainly because of the refugee crisis, but also because of Russia’s aggressive policies.

The new partnership has two main basis: first, stopping together the refugees and fight against illegal migration. Turkey has asked for more financial assistance in order to improve the living conditions of those refugees who will have to stay in Turkey. The EU has proposed to provide 3 billion Euros annually, but the existing European funds at the European Commission’s disposal were not enough to gather this sum. So the EU has first to find the money. It has been agreed that this money will not be taken from the accession funds reserved to Turkey and that the EU will have to find fresh funding.

Turkey has also reminded Europe about another important topic, which is the second base of this new partnership: the visa regime Turkey is being subjected to.

Only the IPA (Instrument for Pre-Accession Assistance) funds that haven’t been used and sent back to Europe by Turkey may be used in this context. Besides, the funding aims to help exclusively the Syrian refugees, but the EU hasn’t decided yet to whom exactly give the money in Turkey and under what mechanisms.

Turkey has also reminded Europe about another important topic, which is the second base of this new partnership: the visa regime Turkey is being subjected to. This is something the two sides should have discussed anyway, in the context of accession negotiations. In other words, this is not directly related to the refugee crisis. Let’s recall that the EU insists the visa regime’s liberalization will be linked to “readmission agreements”.

Visa regime has been liberalized for other candidate countries in the past without this link; but who knows why, the readmission agreement has suddenly become a pre-requisite in regard to Turkey: according to that, Turkey has first to implement the readmission agreement, and if the EU is satisfied with the implementation, the EU Commission will launch the complicated process of visa liberalization for Turkish citizens, in order to allow them to travel freely in Schengen Area.

The two sides have even given a deadline for the liberalization: end of 2016. If Europe doesn’t keep its promise despite the deadline, Turkey may very well suspend the readmission agreement.

The readmission agreements facilitate the expulsion of third-country nationals. So when irregular migrants use Turkish territory to go to Europe, European officials will be able to send them back to Turkey, and not exclusively to their country of origin.

The practical problem being how to prove those irregular migrants have reached Europe through Turkey, so the two sides must agree on the ways to prove it. By definition, an illegal migrant doesn’t carry a passport with official border gate stamps; so the only way may be to make the immigrants in question recognize that they came from Turkey. Will this be enough proof?

Visa liberalization is not without problems, either. As you may recall, France has recently decided to suspend the Schengen Agreement because of security reasons. So if countries start suspending the Schengen Agreement, we’ll not be able to talk about free movement, anyway. The European Commission has no solution on that, because they can’t impose anything to member states when this is about “national security”.

Turkey and the EU didn’t only discuss what to do with the Syrian refugees recently, they have also discussed what to do with Turkey’s accession process. In other words, Turkey and the EU are not talking on the refugee crisis as two random partner sides, but Turkey is rightfully treated as a country which is supposed to become one day a full member of the EU.

Turkey is officially a candidate country for quite some time, but no new chapter had been opened to negotiation since five years. Turkey is especially insisting the EU to deal with the chapters that have been blocked by the Greek Cypriot Government; besides Ankara has asked the opening of the chapter on Economic and Monetary Policy. Moreover, Turkey has reminded that it is not being invited since many years to the EU summits, and told its European counterparts that it wants to figure in the family photos from now on.

The EU has accepted to organize every year two summits with Turkey and to open the Economic and Monetary Policy chapter. So, as of today, 15 chapters out of 32 are temporarily open, while negotiations in one chapter has been accomplished already.

By the way, the two sides have agreed to discuss about the Customs Union as well, and perhaps to turn it into the “Customs Union +” agreement by expanding its content.

Involved parties have the impression that the Cyprus reunification talks will come to a positive end around next April, so it is expected that the Greek Cypriot Government may lift its veto to the opening of several chapters: energy policy; foreign, security and defense policy; judiciary and fundamental rights; justice, freedom and security; education and culture.

Despite the “positive agenda” and the new roadmap, one cannot say that the EU and Turkey fully trust each other. As long as the EU doesn’t demonstrate its solid determination about Turkey’s membership, the distrust will remain. However, the fact that we have at least reached a point where we can open new negotiation chapters allows us to have some hopes for the future.