Forced migration and displacement are among the unlawful and most effective measures that the Assad regime has been using. However, legalizing the unlawfulness will have long-term impacts on the Syrian state and society. 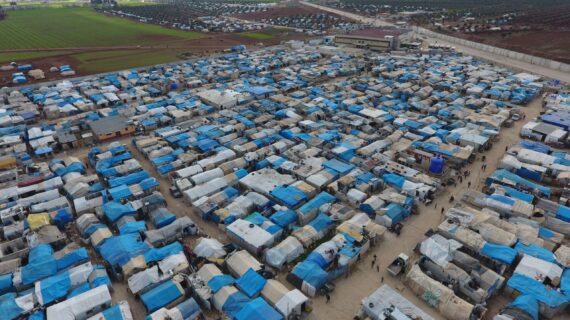 An aerial view of Babussalam refugee camp is seen as Syrians shelter since the beginning of the Syrian civil war in 2011, in Azaz, Syria on March 15, 2018. Anadolu Agency

Following the eruption of the Syrian uprising, the Assad regime has not hesitated to use any tactics to crack down on the uprising and reinstall its iron fist over Syrian territory. Using chemical weapons and barrel bombs are just among the many inhumane measures that the Assad regime has used.

However, despite all of its brutal methods, the Syrian regime was unable to maintain its control over Syrian territory. Since the first year of the crisis, the opposition forces have started to control different areas of Syria where it established its modus operandi of governing, and challenging the regime’s claims of sovereignty.

Yet, the Russian intervention at the end of September 2015, which radically changed the balance of power, and led to the Assad regime being able to re-stand on its feet. Backed by Russian Air Forces and associated by Iran’s paramilitary groups on the ground, the Assad regime started to choke the opposition’s controlled pockets, and apply its policy of forced migration.

The Syrian regime has used forced displacement as a method to crack down on rebelled areas and to ensure the maintenance of its control since the first year of the uprising, as in the case of the Bab Amr district of Homs in February 2012. This method was accelerated and applied in several areas after the regime gained an upper hand with Russian intervention.

‘Encircle–starve–migrate’ was the tactic that Assad regime and its allies started to apply against the opposition-controlled pockets. Benefiting from Russian and Iranian support, and misusing the announced ceasefire and de-escalation agreements, the Syrian regime has accelerated its offensive campaigns.

‘Encircle-starve-migrate’ is the tactic being deployed by the Assad regime in order to crack down on rebel areas and to ensure the maintenance of its control.

The evacuation agreements have enabled the Assad government to reclaim its sovereignty, but also to interfere in the demographic composition of the evacuated regions. The evacuation agreements of the towns of Madaya and al Zabadani in April, Darayya in August, Muaddamiye in September (in Western Ghouta), and East Aleppo in December 2016, evacuation agreement of Duma in Eastern Ghouta in April 2018, evacuation of northern Homs opposition pocket in May 2018, and Daraa pocket in July 2018, have all concluded with the forced evacuation of hundreds of thousands of Syrian people. Idlib was the final destination for the evacuated people, while Afrin and Euphrates Shield Operations have received a proportion of the displaced people, mainly in the latest waves.

What is more important, is that the Assad regime seems to have taken measures to render permanent these coerced demographic changes instituted in various districts and even entire cities, and is set to accelerate these changes in the reconstruction phase of these areas. Among the most significant of these measures is the expropriation of former residents’ rights to their property, which would be transferred to Iran-backed pro-regime militants and their families.

Law No. 10 of 2018: Legalization of demographic engineering

The signing of law no. 10 of 2018 on April 2, 2018, represented a serious step by the Assad regime to ‘legalize’ the unlawful ‘de facto’ displacement. It is expected that this legislation will facilitate the legalization of demographic changes instigated by forced migration and deportation. The law, which has been voted on and signed into the Syrian legal code by the Parliament and al Assad respectively, authorizes the formation of new administrative units, in accordance to general administrative regulations. The measure in question will codify de facto demographic shifts by allowing for the reestablishment of administrative institutions in areas where residents had been compelled to abandon their homes due to armed clashes or forced migration, as it made it more difficult for former residents to retain their rights on their property, and enables those who have seized such property to register these properties under their own ownership. As such, this formerly unlawful action currently underway is now in the process of becoming legal.

As mentioned above, the latest legislation, which builds on the prior law no:66 of 2012, allows for the confiscation of property rights of lawful residents of areas having underwent forced expulsion and migration, by authorizing the establishment of new institutions in existing administrative units. The new law dictates that former residents must apply to these nascent institutions in order to acquire documents proving their ownership of their property within the first 30 days after the institutions’ establishment. While the law’s second clause of its second article, allows for the use of deputation of family members or other representatives by property owners in their application to the related institutions, it is foreseeable that evacuees will not easily be able to utilize this right. This is due to the fact that state institutions tend to be inactive in these areas of concern, as well as that it is usually entire families at a time that are expelled from their homes and towns, making options for potential representatives quite limited, if at all existent. In any case, it is not likely that those who have taken refuge abroad or in opposition-held territory to return to their former homes for fear of arrest, torture, and revenge, until these risks are eliminated.

Law No 10 of 2018, passed by the Parliament and al Assad respectively, attempts to legalize the unlawful de facto displacement of Syrian people.

The new law can also be interpreted to allow for incoming occupants of evacuees’ homes to claim ownership of these properties, based on the sixth clause of the second article, which permits the application for ownership based purely on a claimant’s word in the absence of documentation. The legislation is worded as such: ‘In the absence of documentation authenticating the claimant’s property ownership, the applicant must […] specify the location, perimeter, shareholders, and type of property for which they are applying.’ As can be seen here, the law’s phrasing is quite ambiguous and can be utilized by regime allies to claim ownership over property which is not claimed within the specified timeframe, or over property created by new administrative structures.

Following this new legislation, the Ministry of Local Government announced that it would be working on the necessary arrangements for the revision of administrative structures both in Homs and East of the capital. It has also been announced that these arrangements would apply to the Bab Amr district which had been evacuated in 2012 after its siege by regime allies, as well as the eastern entrance of Damascus and especially the Harasta District near Eastern Ghouta, which had been evacuated of most of its residents during the past weeks.

Another issue raising concern of evacuated real estate being distributed among regime allies is the statement that either official identification cards or passports must be presented during the process of claiming properties in newly formed administrative units, as is stipulated in clause 19 of the second article. The basis for this concern is the fact that the Damascus Directorate of Migration and Passports has recently distributed 200.000 Syrian passports to foreign militants transferred to the country by Iran. It is believed that these passports will be assigned to Iranian, Afghan, and even Iraqi Shiite militants and their families, thus giving them permanent residency in the country.

The Syrian regime seems to continue its strategy of forced migration to win the battle on the ground and he would apply it in Idlib as well. Hence, while the Idlib region, which has remained as the latest pocket in the hand of the opposition, may represent a puzzle for international actors, it is not for the Syrian regime. Being the last destination for hundred thousands of displaced people, and the refuge of almost four millions Syrian would not prevent the Syrian regime from applying its strategy of scorched earth that generated new waves of displaced people. The ongoing offensive by the regime forces in southern Idlib has forced almost 150 thousand people to flee their hometowns towards the Turkish borders in its early days, generating the possibilities of new refugee waves.

It is impossible for the Syrian state in the long-term to re-stand on its feet without the efforts of the young generations of well-educated and professional Syrian refugees.

The Syrian regime strategy of legalizing its unlawful measures will impact the future of Syria. Those forced to leave their homes in Syria either to the Idlib region, which would end as a temporary shelter, or to other countries, represent a remarkable proportion of the Syria Arab Sunni population. Taking into consideration that there will be limited proportion of returnees under current conditions, the exclusion of the displaced people from the Syrian population will recreate the Syrian social fabric, and thus have strategic impact.

On the other hand, those who fled Syria to other countries represent the vast majority of the young generation, educated and professional class, as well as the main businessmen community of the Syrian society. Hence, it will be impossible for the Syrian state in the long-term to re-stand on its feet without their efforts.

Bilal Salaymeh holds a Bachelor’s (AYBU) and an MS (METU) degree in International Relations. Currently, he is pursuing his PhD in International Relations at METU. Salaymeh is also serving as a research assistant at the SETA Foundation Foreign Policy Research Department. His research interests revolve around the Middle East with particular focus on Syria and the Palestinian Issue.