The night of July 15 in Turkey illustrated that the strong relationship between the media and democracy can thwart a coup attempt. Even if Western media outlets continue to ignore the heroism displayed that night. 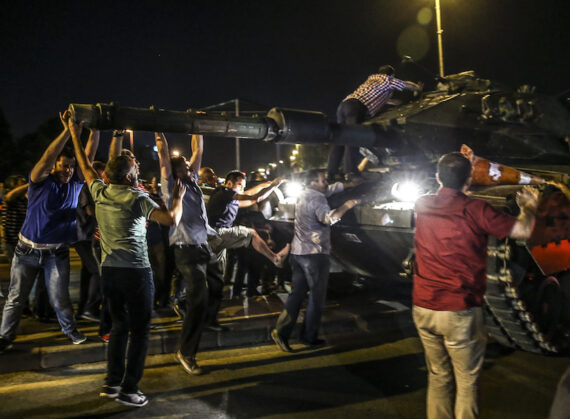 When discussing the media’s strong links to democracy in the literature of democracy, it is problematic that large media organizations that have a global network make a choice between two images that represent similar concepts. Although their time, space, causes and social dynamics are different, the July 15 coup attempt in Turkey and the incidents in China’s Tiananmen Square, which occurred in 1989, have a common point. On both occasions, civilians united to resist tanks. The image of a civilian standing before the tanks at Tiananmen Square in Beijing in 1989 is used as one of the symbols of the pro-democracy stance in Western media, as the image is definitely a strong symbol for that.

On the other hand, many similar images were captured on the night of the July 15 coup attempt in 2016. Many photos and other kinds of images that showed great instances of heroism were released to the public. However, over the course of the three years since the coup attempt, the global media has not approached these images with similar enthusiasm. I will elaborate on this factor in terms of media-democracy relations, but firstly, I would like to briefly mention the coup attempt in Turkey.

While global media outlets served justice to the civilian who stood against tanks in China’s Tiananmen Square in 1989, it refused to pay attention to the acts of heroism displayed by the Turkish people on the night of the July 15 coup attempt.

MSNBC did not apologize for its fake news

Three years has passed since the military coup attempt orchestrated by the Fetullah Terror Organization (FETO). The Turkish nation has the justified proud of repelling this attempt under the leadership of President Erdogan. The night of July 15 witnessed an epic, in which civilians resisted heavy weapons with their bare hands – a phenomenon that is not very common in the history of modern nation states. Organized by FETO militants infiltrated in the Turkish military, the coup attempt aimed to overthrow Turkey’s democratically elected president and the Justice and Development Party (AK Party) government, which had won the general election by receiving 49 percent of the vote share only 7 months before the coup attempt.

On the night of July 15, the political will, patriotic military officers, police officers and media, acted together in order to repel the coup. They all became heroes of the night. Democracy won that night, whereas the pro-coup mindset suffered a huge blow. The other two defeated groups of that night include the global political actors who kept their silence and hesitated to support democracy against the coup attempt for a long time, and media organs with global networks who did not take a stance against the coup attempt. The Turkish media united and stood up against the atrocity and played a key role in the fight for democracy.

A number of global media outlets, which are supposed to display a similar approach against the coup attempt according to media theory, reported fake news through the U.S.-based MSNBC. While reporting the news, the correspondent said that Erdogan’s plan that was supposed to land in Istanbul was banned and that he was trying to seek refuge in Germany.

Since it is obvious that such a thing never occurred, we would like to remind MSNBC that the Turkish public is still expecting an apology from them. According to professional principles of journalism, they are required to apologize and issue a correction notice by acknowledging that the news was false. From the U.S. to the UK, Germany and France, the Western media tried to legitimize the coup attempt with news reports asserting that the coup was organized against an “authoritarian, dictator, anti-democrat and fundamentalist Erdogan.” They also seemed regretful while discussing how the coup attempt was defeated. FETO leader Fetullah Gulen’s first statement on July 15 was published by the Wall Street Journal on July 17. In the answers he gave to the questions relayed to him via email, Gulen acted as if he was the victim, and released the expression, “this is a plot,” into circulation.

We would like to remind MSNBC that the Turkish public is still expecting an apology for the fake news during the July 15 coup attempt.

Remembering how the Western media approached the coup attempt is important in terms of making sense of today. Although Turkey has so far concrete evidence proving that FETO members organized the coup attempt, Western politicians and media outlets still display the same cynical approach. The exclusivist and obsessive language used in news reports and opinion articles throughout the coup attempt process still frames the current approach to the incident.

Had they approached the event through a lens of universal achievements of democracy, they would have made news about people who stopped tanks with their bare hands, who stood up against bullets, and who suffered severe injuries due to the bombs dropped by fighter jets. Such news stories would set an example to the peoples of the world and make a great contribution to the collective memory of humanity. However, these media outlets chose to ignore these stories.

The power of bare hands against tanks

As stressed above, a comparison based on a single photograph will help us remember the double standards applied by media organizations. There is a striking resemblance between the image from Tiananmen Square, which is imprinted on the memories and images reflected from the July 15 resistance in terms of manifesting the civilian will against tyranny.

Western media outlets still serve the image of the Chinese civilian who stood up against tanks during the Tiananmen incidents in 1989 as an example of resistance. This is exactly how it should be. Those who resisted must be given credit for their heroism.

On the other hand, Western journalists do not seem to remember or simply ignore the heroic resistance of the Turkish people on the night of July 15, 2016, although that night witnessed many similar moments of heroism. This is undoubtedly ignored on purpose. Even though some of the images that portray the resistance in the best way are owned by Reuters, AP and AFP, the general trend of ignorance still continues. This shows the absence of an unbiased attitude that is needed in democracy-media relations.

There is a striking resemblance between the image from Tiananmen Square, which is imprinted on the memories and images reflected from the July 15 resistance in terms of manifesting the civilian will against tyranny.

For instance, the striking photo of Metin Dogan, a citizen who laid in front of a tank to stop it at Ataturk Airport on the night of July 15, did not circulate among the global media as a symbol of civilian resistance defending democracy against coup plotters.

Similarly, the courage displayed by a citizen named Sabri Unal, who tried to stop the tanks in Uskudar, was astounding. Unal stood up against a tank and laid in front of it when it did not stop. When the tank ran him over, Unal miraculously survived and leaped back to his feet again. Then he moved on to stop the second tank advancing him. He lay down once again but the second tank left him injured. The footage showing such stories of heroism were recorded by security cameras that night and are available on the internet. These instances of defending democracy against coups and civilian politics against authoritarianism can barely be found in history.

The two images I mentioned above are only two instances of the resistance that we witnessed on the night of July 15. Every moment of the civilian resistance against F-16 jets, tanks, and other armed vehicles is a testament to the heroism and courage displayed that night. They constitute the most striking examples of fighting for freedom, democracy, and popular will.

Undoubtedly, the global media does not only refuse to see the facts on the subject, but also creates a perspective that rebuts the reality and meaning of that night.

FETO is a genuine threat

Had the Western media outlets approached the subject in the framework of democratic standards instead of accusing Turkey within the three years since the coup attempt, they would have realized the serious threat posed by FETO in their own countries. Surely, it is not too late to realize this. They still have a chance and can present the democracy heroes they have so far ignored to the global public. On the night of July 15, civilians and journalists in Turkey demonstrated the strong ties between media and democracy. The country showed the world that military junta attempts do not have a chance as long as these two structures support each other without hesitation. The solidarity we sought was practiced that night for the first time in Turkey. Acting against the democracy-media theory in such a positive context also indicates that Western media outlets yield to biases and black propaganda.