The Turkish Diaspora and the 24 June Elections

Loads of rented meeting and conference rooms are getting cancelled in order to prevent programs in favor of, for instance, Turkey’s new system of government. At the same time, unfortunately, HDP supporters, who are very close to and openly sympathize with the PKK, are welcomed on various platforms. 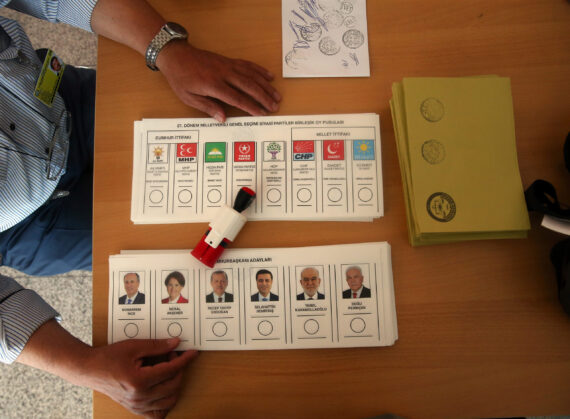 Voting papers for the Turkish Presidential and General elections, are seen at Esenboga International Airport in Ankara, Turkey on June 07, 2018. Turks living abroad have begun voting on Thursday for the June 24 presidential and general elections at customs gates and foreign missions. Anadolu Agency

Since last Thursday, members of the Turkish diaspora all over the world have been going to polls to vote for Turkey’s snap elections to be held on 24 June. There are approximately 3 million Turkish citizens who are able to vote in the elections. As one can guess, 3 million is a number of great importance as it makes up 5 percent of Turkey’s total electorate.

Turks who have been living abroad for over fifty years received the right to vote abroad for the first time during the presidential elections in 2014, when Turks elected their president for the first time through popular vote. Prior to this, it was difficult for most expats to go to Turkish custom gates, which was the only place they could vote during elections. In 2014, only 530 thousand Turks abroad went to the polls due to some organizational problems. However, this number increased during the general elections on 7 June, 2015 up to 1,06 million and to 1,3 million during the snap elections in November of the same year. The number of all diaspora votes all over the world (including the votes casted at Turkish custom gates) also increased to 1,4 million during last years referendum. Interestingly, this is also the number of Turkish voters who live in Germany.

During the last referendum on 16 April 2017, more than 800 thousand Turks living abroad supported Turkey’s constitutional change with “Yes.” Now, the AK Party, for instance, hopes to encourage at least 1 million voters to go to the polls in order to support the party and its presidential candidate. With regard to the previous election results, one notices a certain pattern according to which nearly two thirds of all members of the Turkish diaspora support both the Turkish President Recep Tayyip Erdogan and his ruling party.

By focusing on the 2017 referendum results, for instance, it is striking that 75 percent of the votes in Belgium, 65 percent of the votes in France and 63 percent of the votes in Germany were given in favor of the new system of government. By this, it should be clear that in particular regarding the presidential elections, votes from the Turkish diaspora might be of great importance and even have a decisive meaning. In this sense, the AK Party additionally prepared a special election program for the Turkish diaspora in which the specific needs of Turks abroad are addressed in depth. On the other hand, it’s also an interesting and positive step that the main opposition party also took the diaspora into consideration by addressing it in its general election program – though, being not concrete but rather superficial. Nevertheless, it is a worthy and interesting issue that the diaspora’s ability to change the election results is seriously taken into account, even by opposition circles.

However, there are unfortunately two issues, which disturb and affect the diaspora in a negative way during election periods. First of all, people living abroad have to face and cannot understand the ban regarding campaign appearances on, for instance, German soil, as has been the case during both the last referendum and even the current 24 June elections. Furthermore, it’s observed that while the campaign ban is strictly executed regarding the AK Party, in particular HDP events, to which PKK supporters and HDP politicians join, are generally tolerated.

The second issue is about the negative behavior of both German officials and even private persons who are biased to obstruct if a relation to the recent Turkish government is noticed. Loads of rented meeting and conference rooms are getting cancelled in order to prevent programs in favor of, for instance, Turkey’s new system of government. At the same time, unfortunately, HDP supporters, who are very close to and openly sympathize with the PKK, are welcomed on various platforms. In this sense, it shouldn’t surprise anyone that even the Green Party MP, Cem Ozdemir publicly supports the Kurdish left-nationalist HDP and has displayed his support by attending the party’s events in Germany.

Nevertheless, these kinds of efforts most probably wouldn’t change most of the diaspora members’ political positions. On the contrary, members of the Turkish diaspora are going to be much more encouraged to vote in accordance with their own standpoints. Thus, it’s definitely a positive step since Turks abroad are also able to vote during elections in the country of which they hold citizenship. While it is not possible for millions of people who live abroad to vote during general or local elections in the country they live in, the right to vote regarding Turkey’s elections thus is perceived more seriously. However, it seems that some native citizens in countries where the Turkish diaspora does exist, develop an increasingly negative attitude regarding Turks’ right to vote, their political preferences, the increasing visibility of the election process and its importance by having an influence on the election results.