The Turkish Economy in the Long Run

Between 2002-2017, the average annual economic growth rate has been 5.7 percent, a tremendous performance, which is somewhat higher than the long-term average and far higher than industrialized countries, and better than most of the developing countries. 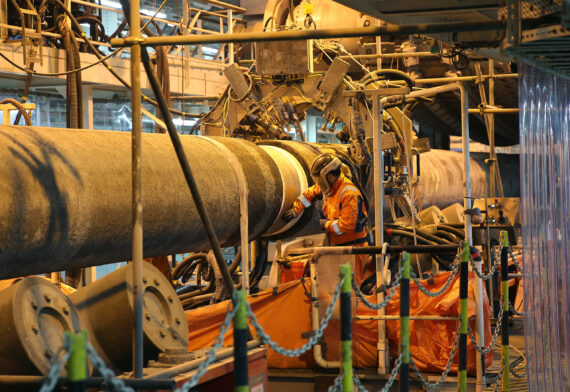 A photo shows the inside view of Pioneering Spirit vessel, in Istanbul, Turkey on April 26, 2018. The deep-water offshore construction of the first line of the TurkStream natural gas pipeline is now complete as the world's largest pipelaying vessel, the Pioneering Spirit, reached the Turkish shore off Kiyikoy in northwest Turkey. Anadolu Agency

The Turkish economy grew by 7.4 percent year-on-year in the first quarter of 2018. Thanks to this spectacular performance, Turkey ranked second fastest growing economy in the G20, only behind India (7.7 percent) and ahead of China (6.8 percent) and Indonesia (5.1 percent). The average growth rate for the Euro area is only 2.5 percent. The U.S. is marginally better with 2.8 percent. Moreover, this performance of Turkey came at a time when other emerging countries in the G20 club have performed poorly. The growth rates of Mexico and Brazil are just 1.3 and 1.2 percent in the first quarter of 2018, respectively.

One should note that Turkish investment expenditures, arguably the most important sub-category of GDP (Gross Domestic Product), increased by 9.7 percent in this period, which gives an important sign regarding the health of the Turkish economy and her future direction.

Turkey has a very good track record of sustaining a significant level of average long-term growth rate (4.8 percent) for the last 7 decades. While the world economy grew substantially in the aftermath of the World War II (WWII) into the 1970s in general, only some (developing) countries including Turkey managed to sustain their growth performance more or less intact well after the 1970s and even until today. For example, the growth performance of Western Europe was quite bright with a 4.8 percent average growth rate annually in the 1950-1973 period as they were recovering from the tumultuous years between the two world wars and the WWII itself. However, their average growth rate was rather disappointing with around only 2 percent in the post-1973 period. The same pattern held for Eastern Europe, Latin America and the US, albeit with varying degrees.

Thanks to having a relatively high level of long-term average growth rate, the Turkish economy transformed tremendously after WWII. Prior to the war, Turkey had mostly been a rural country with an economy based mostly on agriculture. After the war Turkey began to industrialize with a growing urban population base. The share of urban population increased from less than 20 to over 85 percent and the share of agriculture in GDP plummeted from over 40 percent to around only 6 percent as of 2017.

While this performance has not sufficed for Turkey to become a fully developed country, it never the less made great strides from a very low base to become an upper-middle income country. With this performance, Turkey fared tremendously better than industrialized countries as well as numerous developing countries, beating the world average significantly.

Thanks to this performance, the Turkish economy grew more than 20-fold since WWII, as the Turkish population increased from around 20 to 81 million and GDP per capita more than quadrupled to over 10.000 dollars. In the period between 1950-1980, the Turkish economy had been inward looking and import-substitution growth strategy had been in place. With the adoption of export-oriented growth strategy, Turkey has increasingly become a globally open economy. The volume of external trade of Turkey has tremendously expanded since then, from less than 10 to over 50 percent of GDP.

Moreover, between 2002-2017, the average annual economic growth rate has been 5.7 percent, a tremendous performance, which is somewhat higher than the long-term average and far higher than industrialized countries, and better than most of the developing countries.

Surely, the Turkish economy has her own problems such as current account deficit, as other economies have their own. However, the Turkish economy has showed her resilience and potential time and again in the last 7 decades and particularly in the 2000s. Provided that smart economic/industrial policies implemented, Turkey can sustain her growth performance and become an industrialized and rich country by 2040 or 2050, as future projections indicate.