The Turkish Youth: A New Game Changer in Turkish Politics?

Now it is crucial for parties to design their programs and election campaigns according to the socio-economic transformation of young people, who may be the new game changers in Turkish politics. 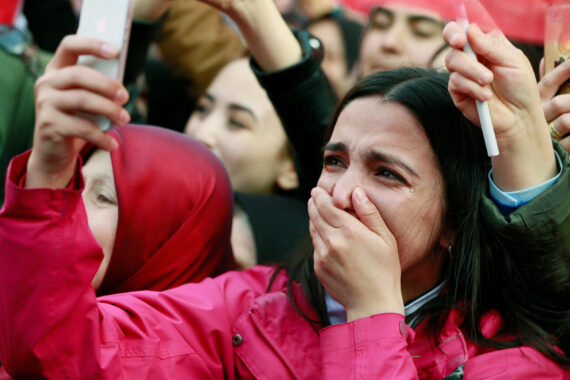 People show their support as President of Turkey and the leader of Turkey's ruling Justice and Development (AK) Party Recep Tayyip Erdogan (not seen) addresses the crowd during a campaign rally ahead of March 31 local elections, in Ankara's Elmadag district, Turkey on March 28, 2019. Anadolu Agency

Why did Turkey’s local election result in an unexpected outcome? Currently politicians, scholars and the rest of the Turkish public are dealing with this question in order to understand the dynamics that affected the election. As I analyzed last week, one of the leading dynamics of change were the rules and regulations of newly-emerging pre-electoral alliances in Turkey. There is another eye-catching debate on how the socio-economic transformation of the Turkish youth reflected on voting behavior. Some scholars argue that a new voter profile will change the balance of Turkish politics in the near future and the first traces of it were seen on March 31.

13.970.568 young voters between 18-29 years old voted in the June 24 parliamentary and presidential elections in Turkey. They composed a majority of voters with 24,8% compared to other age categories. Even though the official statistics on voter profile during the March 31 local elections have not yet been shared, it is obvious that the number of young voters showed a slight increase again.

Some scholars argue that a new voter profile will change the balance of Turkish politics in the near future and the first traces of it were seen on March 31.

What do these statistics tell us? Indeed, even if the number of young people between 18-29 years old is significant, it does not mean that voter profile showed an apparent change in the last years. The truth is that Turkey’s voter profile has always consisted of young people. For instance, while 14.367.567 young voters between 18-29 years old had voted in the 2011 parliamentary elections. This number only showed a slight increase to 14.423.643 young voters in the 2015 parliamentary elections. The ratio of young voters between 18-29 years old decreased from 34,9 percent in 2011 to 24,8 percent in 2018. In other words, it will not be right to say that Turkey’s voting profile is getting younger year by year.

So, if the number of young voters did not skyrocket, why has the impact of the young vote on the 31 March local elections become a hot topic of discussion? This is also related to the socio-economic transformation of Turkish society in the last years and the reflections that it has had on the voting behavior of the youth. Especially with the proliferation of social media channels, the political affiliation process of young people has fundamentally changed. While the main source of political affiliation was close-knit relations for the past generations, there have been multiple sources for young people to form their political attitude and behavior.

Recent surveys show that young people tend to have different political behavior from their families.

All of these factors show that even if the rate of young voters between 18-29 years old decrease in recent years, the changing political affiliation of young people is one of the determinants of the 31 March local elections. Because of this reason, it is crucial for parties to design their programs and election campaigns according to the socio-economic transformation of young people, who may be the new game changers in Turkish politics.