U.S. President Donald Trump is also a scapegoat. Since his inauguration, his discharge is constantly on the agenda in U.S. domestic politics, while the international community is fed up with him. The most criticized thing about him is his “crude and obnoxious” tone. But as a matter of fact, he perfectly represents U.S. policies, especially U.S. foreign policy, with this very tone. 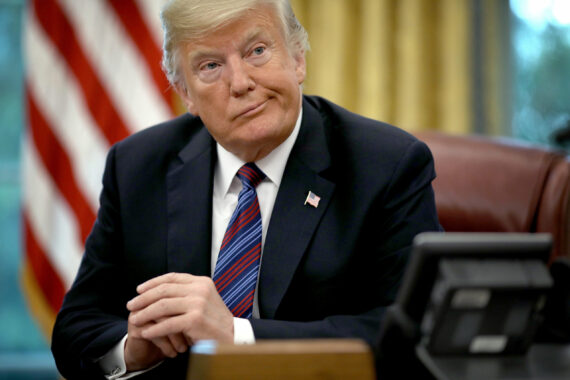 U.S. President Donald Trump speaks on the telephone via speakerphone with Mexican President Enrique Pena Nieto in the Oval Office of the White House on August 27, 2018 in Washington, DC. Trump announced that the United States and Mexico have reached a preliminary agreement on trade. Getty Images

Judaism has a holy day named Yom Kippur (Day of Atonement), which is spent with ceremonies of redemption for the sins of the Israelites. During the early periods of Judaism, high priest Aaron would perform religious ceremonies for the atonement of the community and made people pray on this holy day. Then, he drew lots from a lottery box over two goats. One was selected to sacrifice for the sins of the people, while he leaned his hands on the second goat and confessed the sins of the entire people of Israel, thus making it the scapegoat. After that, the scapegoat was taken out of the sanctuary and cast into the desert. According to the Jewish faith, the sins were cleansed as the scapegoat lurked out of sight.

Today, the word scapegoat is used in almost every language, including Turkish, to define one that bears the blame for others. In that sense, the U.S. President Donald Trump has become a global scapegoat. Since his inauguration, his discharge is constantly on the agenda in U.S. domestic politics, while the international community is fed up with him. The most criticized thing about him is his “crude and obnoxious” tone. But as a matter of fact, he perfectly represents U.S. policies, especially U.S. foreign policy, with this very tone. That is why many international audience supported Trump against Hillary Clinton during the presidential race. It was obvious that Clinton would sugarcoat U.S. foreign policy’s atrocious practices and their consequences much better than Trump since Trump accentuates the vulgar side of U.S. policies.

To illustrate, let me remind the reader of the 2003 invasion of Iraq, which led to a series of conflicts in the region. The U.S. Senator from Arizona, John McCain, who recently passed away and was eulogized by the U.S. press and even by his rivals, was noted as one of the leading hawkish names paving the way for the invasion of Iraq. Shortly before his death, McCain wrote in his memoir that the invasion “can’t be judged as anything other than a mistake, a very serious one, and I have to accept my share of the blame for it.” But no matter whether he regretted it, more than 600.000 Iraqi civilians were killed in Iraq over the past decade while the U.S. troops suffered 4.500 losses. Plus, millions of Iraqis were displaced and lost their homes.

A former deputy from the Republican People’s Party (CHP) likened the Gulenist Terror Group (FETO) to a barnacle, saying that a barnacle cannot survive unless it feeds on a whale’s skin and how FETO flourished in Turkey. So, it can be said that Israel is a barnacle living on the U.S. ever since it was founded. The U.S. is also content with supporting the country’s tyranny. Innumerable examples portraying this relation can be given but let me remind you of the latest one. The law that recognizes Jerusalem as Israel’s capital city passed in 1995 in the U.S. Congress. Although all U.S. presidents in office as of that date kept the U.S. Embassy in Tel Aviv by using their authority in foreign politics, this law has been in force since then. Trump only exercised it, making the U.S.’ Israel policy even more obvious, and urged moving the U.S. Embassy to Jerusalem.

Another example can be given from Turkey. FETO of course did not appear during Trump’s term in office, as the terror group has been revealed to have almost 40 years of past. When FETO attempted to stage a military coup in Turkey on July 15, 2016, Barack Obama was in the White House. Both Obama and his successor Trump issued statements siding with Turkey on the subject, but this cannot change what happened. FETO leader Fetullah Gulen, who moved to Pennsylvania in 1999, with the help of former CIA vice-chair Graham Fuller, is still living there without facing any restriction since then.

European leaders, especially German Chancellor Angela Merkel and French President Emmanuel Macron, criticize Trump for being compliant with authoritarian regimes and having problems with Washington’s allies. But endless examples can be listed showing that France, Germany, and the U.S. have not only complied with authoritarian regimes and even dictatorships, but have also laid the groundworks for these regimes in most cases. The second new situation for Germany and France is Washington’s relations with its allies since Trump’s inauguration. But Trump does not represent the entire U.S. on this matter. As the German Foreign Minister put it, the U.S. is bigger than the White House and Trump cannot change that no matter how much he tweets.

Nevertheless, the rest of the world can hardly contend that Trump is not suitable for the U.S. Presidency.