The UAE's Strategic Redeployment in Yemen

There are three reasons for the UAE's strategic redeployment in Yemen: The unwillingness to carry the military and financial burdens of the war, Abu Dhabi's attempt to better its image in the West, and to continue the war through proxies. 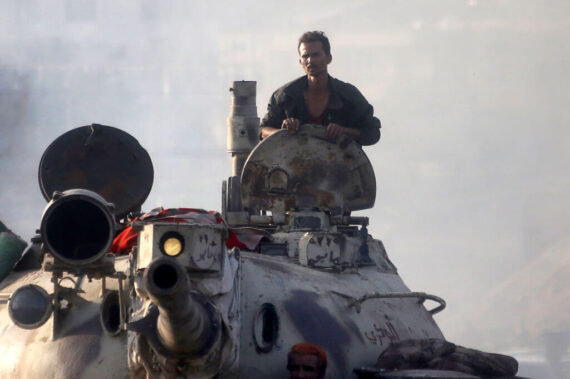 Yemeni fighters loyal to the country's exiled President Abedrabbo Mansour Hadi ride a tank during clashes with Shiite Huthi rebels in the country's third-city of Taez on May 30, 2019. Getty Images

The United Arab Emirates has recently announced its renewed policy towards the conflict in Yemen. The Abu Dhabi administration suggested that the country is planning to decrease its military presence in Yemen, where a bloody civil war has been continuing since 2015. The announcement brought questions about Abu Dhabi’s real motivations as the country has been the staunchest supporter of the Saudi-led military operation in Yemen. Although international observers interpret the UAE’s statement as a withdrawal, it can be argued that this move is rather a “strategic redeployment.” Therefore, the UAE’s decision is not a complete withdrawal, but rather an attempt to update its strategy toward the conflict in Yemen.

There are three reasons behind this “strategic redeployment” move. These are the UAE’s unwillingness to continue carrying the military and financial costs of the war, Abu Dhabi’s desire to improve its increasingly worsening image in the West- particularly concerning human rights issues- and the goal of continuing the war through proxies instead of direct intervention.

The UAE has been one of the most important partners for Saudi Arabia in Yemen in the fight against Iranian-supported Houthis.

The UAE has been one of the most important partners for Saudi Arabia in the fight against Iranian-supported Houthis in Yemen. Since 2015, it is estimated that the UAE has lost at least 100 Emirati military personnel in the operations in Yemen. The war also costs billions of U.S. dollars to the Emirati budget. With a new strategic redeployment, the UAE aims to minimize such military and financial costs related to the war in Yemen. Instead of being directly involved in the war, the UAE plans to increase its presence through proxies that have been heavily invested in since the beginning of the war.

The UAE has transferred huge stocks of weapons and high-tech equipment to its proxies fighting in different locations in Yemen. The militia forces supported by the UAE are now considered to be able to fight Iran-backed Houthis in terms of both military capacity and technical competence. With this new strategy, the UAE leadership will try to have the same influence in the conflict, but with a less direct involvement of the Emirati forces. This will not only reduce human losses but also reduce the financial costs the war has had for the Emirates.

The UAE also aims to repair its damaged image among the Western public. It’s image was initially damaged due to issues related to human rights violations in the war in Yemen. The UAE has been widely criticized in the international media for its role in the death of thousands of children and women, systematic attacks on civilian targets as well as destroying historical cities of Yemen. The UAE has also been accused of preventing humanitarian aid to reach those who have been affected by the ongoing conflict. In order to help change this negative image, the UAE is attempting to present its new strategy of redeployment as “withdrawal,” with hopes that international pressure may be minimized.

The UAE has recently changed its strategy and transferred huge stocks of weapons and high-tech equipment to its proxies fighting in different locations in Yemen.

Therefore, it should be noted that the steps taken for the future of the military presence of the UAE in Yemen are strategic and tactical. Aiming to use local collaborators as proxies, the Abu Dhabi administration wants to cover up its failed military policy in Yemen with the illusion of withdrawal. The UAE leadership also tried to frame its new strategy as part of the United Nations brokered transitional process in order to acquire legitimacy to its future presence in the conflict.

Emirati officials have been trying to eliminate the arguments that the UAE has been destabilizing the region by stating that the withdrawal has been discussed for more than a year and that the UAE wants to facilitate the implementation of the Stockholm agreement signed on December 13, 2018. In addition, Abu Dhabi has increasingly made visible the humanitarian aid it delivered to Yemen through media channels in order to present itself as a humanitarian actor as well. With these moves, the UAE is trying to erase its role in the humanitarian crisis in war-torn Yemen.

The UAE will not end its military presence in Yemen as the conflict is now considered as one of the most important fronts in the fight against Iran.

Finally, the UAE’s new strategy for Yemen should not be considered independent of Abu Dhabi’s foreign policy activism in the Middle East. The UAE has been increasingly involved in conflicts in the region, including Egypt, Libya, Sudan, Palestine, Syria, and Yemen. Such activism has become a burden and brings serious weakness for Emirati foreign policy, as the UAE leadership faces difficulties in managing its activities simultaneously. This confirms the fact that if a country with a limited capacity engages in a number of conflicts, it can face uncontrollable outcomes that can damage the overall policy, as is seen in the foreign policy activism of the UAE. This repositioning move in Yemen can also be used as a way out in terms of addressing other urgent foreign policy issues and escaping at least one of the UAE’s intense foreign policy engagements.

However, as detailed above, the Yemeni conflict will continue to place an important role for the Emirati foreign policy – even if it brings serious problems. Therefore, it may be misleading to imagine the UAE could end its military presence in Yemen, as the conflict is now considered as one of the most important fronts in the fight against Iran.