The UN, Corruption and Scandals: How Did We Get Here?

It’s not only off-the-scale sexual harassment and corruption at the UN which is worrying for those who believe in the importance of the institution. It’s also racism, which is used as a tool of corruption, even when the UN pretends it’s cleaning up its act. 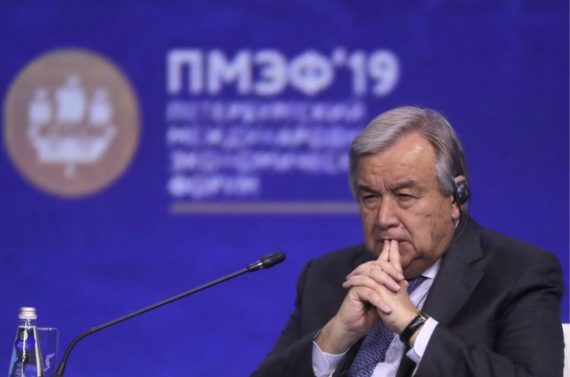 In 2018, the British public was shocked to learn that its cherished aid agency Oxfam was mired by a sex scandal which involved its own workers in Haiti, which were essentially using their power to rape women, or at the very best forcefully exchanging sex with food and medicine.

But should we really have been so shocked?

Indeed, in the world of international aid it is commonly known that western aid workers often carry out such practices. But how do they escape prosecution or any accountability?

Given that the UN conducted a report of its own staff in January of this year and concluded that a third of all those interviewed reported some form of sexual harassment with ten percent reporting actually being touched inappropriately, is it not unreasonable to assume that it is the UN itself which is setting the ‘example’ to aid workers in the field?

Guterres himself was quoted by the London Guardian in January wanting to make a stand. “As an organization founded on equality, dignity and human rights, we must lead by example and set the standard,” he said. But under his administration, the UN might foster a reputation of being the champion of both sexual harassment in the office but also a compliant offender in covering it up.

According to the Guardian, “The UN has tried to increase transparency and strengthen how it deals with such accusations over the past few years after a string of sexual exploitation and abuse accusations against UN peacekeepers in Africa”.

But is that really true?

The head of the UN agency for HIV and Aids Michel Sidibe stepped down in June, six months before his term ends, after an independent panel said that his “defective leadership” tolerated “a culture of harassment, including sexual harassment, bullying, and abuse of power.” His deputy, along with the Geneva-based agency’s head of the Nigeria mission also followed suite.

What these three individuals all have in common is not only were they incriminated in “a culture of harassment, including sexual harassment, bullying, and abuse of power”, but they are all likely of African origin.

Why is that relevant? Simply, because what we are witnessing now in the UN headquarters in New York doesn’t correspond with the clean up of UNAIDS and its scandal, which was called a “boys own” club. By contrast, the UN under Guterres seems to be blocking an investigations against white officials.

Given that Sidibe, who became Mali’s health minister, wasn’t actually accused of any sexual misconduct himself, rather than covering up for a colleague, it is extraordinary now that Guterres won’t throw his weight behind an equally zealous campaign to investigate allegations against Canadian Colin Stewart, who is believed just about to have his contract as MINURSO boss extended in Western Sahara.

Unlike Sidibe, Stewart has very real allegations for his conduct in his previous post in Adis Ababa from both colleagues in New York and in the Ethiopian capital, according to an anti corruption website in New York, whose founder has just been banned from the UN headquarters for exposing the rank hypocrisy of Guterres.

Stewart is expected to continue in his role of MINURSO which is in Western Sahara, a disputed region bordering Morocco which took it over, when Spain abandoned it in 1975. Currently in the UN, a proposal for Western Sahara to gain partial independence from Rabat is being mulled by the security council and so it beggars belief that during such a delicate and tumultuous period, with so much riding on the peace deal, that Guterres would risk such a move, to support a friend and colleague.

Corruption seems to be a real problem in the UN. Cover ups seem to be more and more being reported at all levels from an institution which seems hell bent on not making itself accountable. Patrick Henningsen, editor of 21st Century Wire, who has seen the UN’s operations around the world with his own eyes, says it’s a cultural problem.

“It’s not surprising to see the UN would drag their heels an issue like sexual misconduct with their sordid record of covering-up sexual abuse and human trafficking in places like Bosnia, Haiti, Sudan and the Congo, and who knows where else” he says. “Clearly, there is a culture of corruption running through the wider institution.”

But with sexual harassment and the opportunities for cover ups that it creates, it’s hard to imagine how, in this day and age of social media and on line campaigns like “Me too” that such a calamity could remain. Putting aside how Stewart’s appointment as a UN chief where he could be compromised by blackmail for any sexual impropriety in his capacity as MUNURSO boss, let alone how a scandal could effect his ability to run the Western Sahara mission, there are other more important factors which we should consider.

There are those who go as far to say that peace in a given country can be threatened by how you treat the women there. Lina Abirafeh, a women’s rights campaigner working with the Lebanese American University in Beirut claims she has also been the victim of sexual harassment and understands how in Haiti (with the Oxfam scandal) and in African with UNAIDS revelations that it remains perennial.

“There’s a humanitarian “culture” rampant with toxic masculinity. Boys will be boys and “locker room talk” attitudes are pervasive. Such attitudes easily lead to a sense of entitlement – and an abuse of power” she says.

“Funding to prevent sexual exploitation always fell short. And cases were often not addressed – unless there was reputational risk to the organization. Convoluted “internal processes” did not result in concrete action. Whistleblowers continue to be silenced, threatened, fired. If people aren’t speaking up, it is because we did not provide them with the means to do so” she adds.

Speaking specifically about the UN problem, Abirafeh spells out how a problem like the UNAIDS sex scandal came about and took so long to be tackled and gives a clue as to what’s slowing down the same process in New York and why, perhaps, the MUNIRSO boss is avoiding a full investigation.

“There’s a disturbing trend here: More and more senior officials of NGOs and UN agencies are implicated. But… they’re being put on fully-paid suspension, thanked for their years of service, and given a dignified exit.

“And the UN’s response to these increasing cases of sexual harassment? Our usual recipe is a study and a task force!”

And yet, in Stewart’s case, he is neither facing a dignified exit nor suspension, which raises the question whether there is a racist element in the somnolent, but visible crackdown on those involved with sex scandals. Are only African officials being targeted?

Racism is a factor and even an element of corruption in itself. Who gets chosen to be protected against investigation for sexual harassment over those who do, is a real factor which not only makes the UN chief even more powerful, but encourages corruption and sexual impropriety? If Stewart gets a get-out-of-jail card and is not investigated for the allegations which stand against him, then what message does that send to other British, Canadian, American and any European official who can’t control his hands in the office?

What is clear is that big members like the U.S., Britain and France don’t really care about corruption within the UN and certainly not sexual harassment, regardless of the implications in poorer countries in the world. The author contacted three British Lib Dem MEPs in the European parliament but none of them – not even the one who recently became chair of a human rights committee – could be even bothered to respond to any questions. It’s as though even those who do not practice it or support it, know that it’s the essential currency of big international organizations, along with blackmail, and so prefer to keep quiet as at some point, will be effected by it. It’s not the sexual harassment itself. It’s the blackmail or preferential treatment to waiver prosecution which comes with it.

In reality very few people actually care about sexual harassment at the UN or anywhere, which is one of the reasons it is rampant in the UN, whose members refuse point blank to hold it to account. Even Transparency International’s media operation couldn’t find one official in its vast international network to even make a comment about it.

And so, consequently, although Guterres has a massive corruption problem in the UN with sexual harassment at the core of it. And even his own account comes into question for any journalist who wishes to probe deeper. A Lisbon based organization which paid him in 2016 – but which the editor of Inner City Press claims he didn’t declare as earnings – is being linked to Patrick Ho, the Hong Kong businessman politico who is in jail now for bribing UN officials. Questions over a proposed deal by the Lisbon organization’s sale of an energy utility to a Chinese firm in 2018 are a dark cloud hanging over the UN chief who, appears at least, to have broken the mould on corruption, compared to Ki Moon and Anan before him. Let’s make no mistake. “Me Too” might have arrived at the UNs headquarters but like the journalist who has been banned from reporting on graft there, has been left standing in the rain. It may be knocking, but no one is answering. This is Guterres’s legacy in the making only two and half years into his term. It’s sexual harassment. At the UN. Who cares?

Also Read
Is the Release of Pastor Brunson a Victory for the Trump Administration?