Since the colonial era, the great powers have acted according to the maxim of divide and impera (divide and rule). This has been particularly obvious in the policies concerning Palestine since the period of the British Mandate, but also concerning the Kurdish issue –­ whether secret or open – since the 1970s, or, more recently, in the positions taken concerning the conflicts in Syria and Iraq. 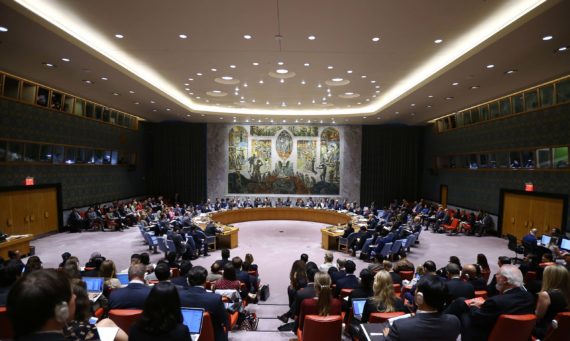 Under the circumstances stated in the first section of this article, where by the international arena is transitioning from a unipolar to multipolar system, the United Nations Organization is condemned to the role of a bystander – a more or less impartial observer of the power struggle among its leading members – and potentially as a forum for the deposition of demands of the powerful and the grievances of the weak, but mainly a forum for international public relations or “public diplomacy” in dialogue with international civil society.

The reasons for this imposed “passivity” are structural. In its present form, the UN Charter cannot serve as blueprint, or organizational framework, for the international rule of law and global peace. The Charter is based on the power balance of a bygone era. The entire system of enforcement of international law embodied in the provisions on collective security, the central piece of the Charter, is built around the privileges of the most powerful countries of 1945, at the expense of all other member states. The over-representation of the Western world – with three out of five permanent seats in the Council – makes this more than evident. It also explains the increasing legitimacy problem of the world organization vis-à-vis the vast majority of member states. Thus, in the present transitory phase, the UN cannot in any way guarantee an “orderly transition” from unipolarity to multipolarity, and for two distinct reasons:

(1) Realistically, the Charter cannot be adapted to the newly emerging realities because this would, according to Article 108, require the consent of the powers of 1945. Frankly, why would countries that lost their global status give up a privilege that represents that very status? This is indeed the “vicious circle” of the veto that was written into the Charter by its founders. Thus, the Security Council architecture – with the institution of permanent membership in its present form – cannot accommodate changes in the power balance, meaning the inclusion of new member states from Africa, Latin America, or the Muslim world. Under these conditions, enlargement of the Security Council is not a realistic option because this would oblige the existing permanent members to share their special privilege with other countries and other regions.

(2) As regards our initial question about a stable political system, the United Nations cannot be the guarantor of a rule-based global order because it embodies the supremacy of power over law. This is obvious if one reads not only the idealistic phrases of the Preamble, but also the specific procedural rules of the Charter. The fine print of legal texts is often overlooked, which creates false expectations and illusions about the role an organization can actually play. This is particularly so with the UN Charter. The P5 enjoy de facto immunity for their behavior. The prohibition of the unilateral use, or threat of the use, of force (Article 2[4] of the Charter), including wars of aggression, does effectively not apply where the actions of permanent members are concerned, and for two interconnected reasons: (a) Those countries can veto any condemnation or coercive action by the Council against themselves and their allies. (b) According to the wording of Article 27(3) of the Charter, they are not obliged to abstain from voting in cases where they are themselves party to a dispute (e.g. the aggressor). Though the latter provision applies to all members of the Council, in connection with the veto it becomes a veritable tool of “power politics without regrets.” In view of the effective lifting of legal constraints on the use of force by the most powerful actors, one might even say that the UN Charter incentivizes such behavior, allowing the great powers to hide behind lofty principles while actually pursuing a policy of national interests.

The Security Council is not a realistic option because this would oblige the existing permanent members to share their special privilege with other countries and other regions.

Thus, when using its power to defend its dominant position, in whichever region of the globe, a hegemonial power, together with its allies, does not need to address any concerns about the legitimacy of its actions. Under UN rules, it cannot be condemned – or reigned in – under any circumstances whatsoever. Unhindered by legal constraints, such a country will indeed feel encouraged to pursue an agenda of power politics whenever its interests so dictate. This is nothing new, however. Since the colonial era, the great powers have acted according to the maxim of divide and impera (divide and rule). This has been particularly obvious in the policies concerning Palestine since the period of the British Mandate, but also concerning the Kurdish issue –­ whether secret or open – since the 1970s, or, more recently, in the positions taken concerning the conflicts in Syria and Iraq. To a considerable extent, those upheavals were triggered by the United States’ illegal military intervention in Iraq in 2003.

Since the colonial era, the great powers have acted according to the maxim of divide and impera (divide and rule). This has been particularly obvious in the policies concerning Palestine since the period of the British Mandate, but also concerning the Kurdish issue –­ whether secret or open – since the 1970s, or, more recently, in the positions taken concerning the conflicts in Syria and Iraq.

Under these geopolitical circumstances, the only chance for the United Nations to regain its relevance – after the stalled reform efforts of the 1990s, shortly after the end of the Cold War – would be a development not primarily at the level of norms and procedures, but in the world of realpolitik. Only a change in the global power constellation towards a genuine multipolar order will enable emerging powers on all continents to convince the current hegemon – and also the existing P5 – that the political and economic price for insisting on a perpetuation of their statutory privileges in the UN will ultimately be too high, and that consent to a reform of decision-making rules will better serve their national interests in the long term. Normative declarations or appeals before a change in the power constellation will only have a marginal effect.

In the meantime, the risk of a collapse of the existing fragile order, indeed a system of unenforceable rules, is real – with all that this entails for zones of geopolitical tension where the assertion of power by a defensive hegemon may exacerbate conflicts and trigger a wider confrontation on a global scale, condemning the United Nations Organization to the role of a mere bystander.