The Unnamed War in Turkey-US Relations

Pence’s expressions, relationships, and foreign policy engagements lie in the heart of evangelist political existence. The cases of Pastor Brunson and Jerusalem both represent a ‘clash of civilizations’ and even a ‘religious-conflict.’ This should be noted as the most significant exposal of the messianic wave in U.S. foreign policy. 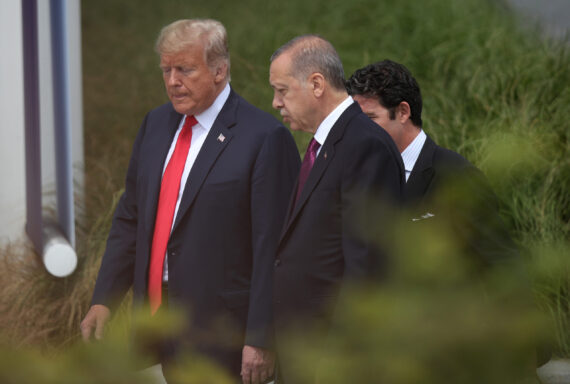 When a glance is taken at the history of Turkey-U.S. relations, it becomes evident that the relations follow a rough course. Even though the tradition of initiating this relation dates back to the Cold War era (1945), one could tell that the contact that was attempted in the 19th century at the last Ottoman period was full of issues. Along with the 1947 Truman Doctrine, Turkey had attracted American attention on a strategic level. As a result of the 1952 NATO membership, Turkey became part of a relation that was going through an institutionalization process on military and political levels.

Unfortunately, since then, cooperation between Turkey and the U.S. has not been exempt from issues. Putting the idea of being exempt aside, it is possible to argue that the course of Turkish-American relations has had direct impacts on Turkish politics. The cause of these issues has been the fact that the U.S. administration portrays Turkey as a passive operator of its own strategies. In other words, the U.S. has considered Turkey as a country to facilitate American foreign policy objectives in the Middle East without hesitation. This consideration has prepared the ground for an interfering character over time. The American interference in Turkish politics, including the facilitation of military-coups and enforcement of a series of unjustified political methods, have resulted in the deterioration of relations between the two countries. Consequently, this situation has given birth to a deep trust problem in bilateral relations. Since 1945, due to a lack of structural change in international systems, the conjunctural crises in Turkey-U.S. relations have been left behind and repaired in one way or another. However, along with the 2003 Iraq invasion, the fluctuations experienced in relations have taken deeper structural forms as opposed to short-term interest discrepancies.

Even though the international system continues to be U.S.-centric, Turkey’s perception of this system, the partial transformation experienced within the system (proliferation of power centers), the change of Ankara’s priorities in terms of its foreign policy, as well as the tensions and fractions experienced in the geopolitical environment involving Turkey make it even more difficult to overcome the crises in Turkey-U.S. relations.

Therefore, it is not possible to take the newly emerged Pastor Brunson crisis out of this context. It is also not quite possible to overlook the new evangelist, conservative and extreme right religio-political identity of U.S. foreign policy that has accelerated under the Trump administration when examining the Pastor Brunson case. More importantly, it is worth noting that the Brunson case is likely to be used for leverage in the upcoming elections by the Trump-Pence duo. The difference between Trump and Pence is also notable here. Trump is very likely to make use of any tools at his disposal to continue his presidency, and this fact is not only limited to Turkey. Trump’s interactions with countries such as Iran, North Korea, and Russia also prove this point. However for the vice president, Pence, this situation contains more ontological reasons. Pence’s expressions, relationships, and foreign policy engagements lie in the heart of evangelist political existence. The cases of Pastor Brunson and Jerusalem both represent a ‘clash of civilizations’ and even a ‘religious-conflict.’ This should be noted as the most significant exposal of the messianic wave in U.S. foreign policy.

The reparation of Turkey-U.S. relations is now more challenging

Today, the crucial pillars of the Turkey-U.S. relations have been weakened, and this makes it even more challenging to overcome the bilateral crises.

The Cold War led Turkey to position itself in the Western bloc under American supervision. However, Turkey no longer positions itself as such. Furthermore, the current international system is no longer unipolar, which enables regional actors to obtain wider impact zones. It is possible to examine the Middle East, where most actors have acquired independent policies apart from American interests to comprehend this phenomenon.

Nowadays, being part of the Western bloc represents nothing but a means of strategic, economic and political engagement for Turkey. Thus, U.S. supervision is no longer seen as necessary when it comes to Turkish foreign policy. More importantly, the Turkey-U.S. relations are now being redefined with factors including anti-Americanism and American-suspicion. From now on, the U.S. is positioned as ‘the other’ of Turkish foreign policy and Turkish state identity. Turkey is no longer an advocate or critic of an American-centric liberal international system, and that is not because Turkey disapproves a liberal world order, but because it is one of those state actors that advocate a fair restructuring.

It is now evident that Turkey and the U.S. have lost intersections when it comes to their foreign policy objectives. The U.S. is reluctant to respond to Turkey’s security concerns, and as compared to the beginning of the 2000s, there is less cooperation between the two states. In fact, due to the cases of S-400s, Jerusalem, Syria, Iraq and Iran, they are far apart regarding opinion. Turkey’s regional foreign policy priorities do not approve American regional foreign policy approaches and generate ‘troubles.’ Iran sets a good example in this regard. Even though Turkey is upset about Iran’s regional policies, and disapproves the Iranian Nuclear program just as much as the U.S., it does not support the harsh American policy towards Iran.

Even though it is possible to argue that the military pillar of the Turkey-U.S. relations, NATO, stands still, it cannot compromise the issues experienced as a whole. Within this framework, it is clear that even more challenging periods are awaiting, and it can be argued that relations between the two can worsen.  If Turkey can level up in the international system and increase its share of power through the new system change, it could also fix the asymmetric issues in its relations with the U.S. More importantly, if Turkey has taken the initiative to step out of the Western bloc, it should create a new identity complying with real power capacity and means. The first thing that comes to mind in such a context is the ‘alternative world’ definition. The issue that requires attention is that actors such as Russia cannot replace the U.S., as superpowers. Instead of leaning towards power dilemmas, Turkey should establish its own independent identity. Despite the issues experienced by the U.S., Turkey’s foreign policy practices still carry a transatlantic nature. This character cannot be changed all of a sudden. Therefore, Ankara should be careful regarding reducing costs. It is necessary for Turkey to stand firm against the insistent and menacing behaviors, the country should respond to every single step taken by the U.S. determined to proceed with its independent foreign policy.