The Unspoken Syrian Tribes in the Syrian Civil War

While Turkey and the U.S. discuss a potential safe-zone in northern Syria, especially in the areas below the 20-mile line, there are tribes who are close to Turkey and see opportunities in cooperating with Ankara in order to get rid of the YPG, prevent an Iranian expansion, and to ensure their own governance. 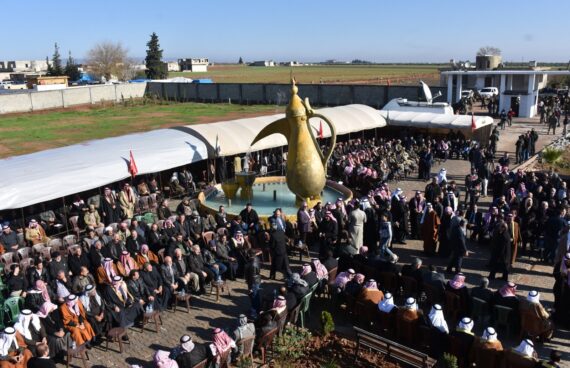 yrian's Arabic, Turkmen, Kurdish and Assyrian tribes' representatives hold the first assembly of "Council of Syrian Tribes and Clans" with Turkey's support after they decided to gather under a single roof against YPG/PKK terrorists in Azaz district in northern Syria on December 21, 2018. Anadolu Agency

In the pre-war era of Syria, Arab tribes would send their youth to Gulf countries in order to provide families with additional income. With the war, many tribespeople had to flee and are now working in Turkey. For the tribes of Syria, the civil war has partially moved Turkey to the previous role of Gulf countries. Tribesmen in Turkey are sending parts of their income to their relatives in Syria and are organizing themselves in political and social structures. The tribes of Syria, and especially those in YPG-held areas, could play a significant role in enabling Turkey to push against the terror threat posed by the YPG on the bases of mutual interest.

For example, the tribes of Manbij have been divided geographically. While some live in Turkey and the Euphrates Shield areas, others still live in Manbij. In order to unite again in their hometowns, the tribes of Manbij released a statement that they reject the Manbij roadmap between Turkey and the U.S. and that they demand a direct Turkey-supported military operation by the National Army to liberate their hometowns from the YPG. Bushaban – the biggest tribe in Manbij – was historically moved by the Assad regime to Manbij as part of the Arabization policy. Therefore, the Bushaban tribe has a historical dispute with Syrian Kurds and is alienated by the current Kurdish governance within their hometowns. In the eyes of the tribes of Manbij, Turkey is the only foreign actor involved in Syria, who might enable them to get rid of the Marxist-Kurdish YPG.

The tribes of Syria, and especially those in YPG-held areas, could play a significant role in enabling Turkey to push against the terror threat posed by the YPG on the bases of mutual interest.

The tribes of Raqqa and DeirEzzor, which are located in the south of the discussed safe-zone, have their share in pushing Turkey to the east of the Euphrates. The six biggest tribes in the regions are Walda, Afadla, Sabkha, Ougaidat, Baggara, and Busaraya. Being grounded in historical enmities, territorial disputes, ethnic and ideological tensions, the tribes of the region have a hostile relation to the YPG. The Walda tribe for example was partially moved by the Assad regime in the 60s to Qamishli and Hasakah and are seen by the Syrian Kurds as ‘strangers who took their historic lands’ and were excluded by the YPG from any participation or voting in Qamishli and Hasakah. The Baggara tribe has a violent past with Syrian Kurds as they helped the Assad regime crackdown the Kurdish rebellion in 2004 and fought against the alliance between Syrian Kurds and the Bedouin Shammar tribe in 1944.

The Bedouin Shammar tribe is an exception among the tribes in eastern Syria, hostile to the Arab tribes and allied with the Syrian Kurds. Currently, the Shammar tribe is militarily organized under the Sanadid Forces as a close ally of the YPG. The Ougaidat tribe also played an important role in the said crackdown and the war. While the Afadla and the Busaraya tribe have expressed their rejection of the YPG in Arab cities, the Sabkha tribe demanded that cities should be governed by its own people.

While all these tribes have fellow tribespeople living in Turkey as refugees, they also welcome a bigger Turkish role in their hometowns and prefer Turkey and Turkey-trained armed Syrian opposition to the U.S.-backed YPG forces. The Walda, Afadla, and Sabkha tribes have welcomed the possible role of Turkey in the liberation of Raqqa, but were frustrated to see the U.S. preferring to work with the YPG. In the eyes of the Busaraya tribe, Turkey is a natural ally to contain the role of the YPG and Iran in Syria. The Baggara tribe also prefers Turkey and Turkey-backed Syrian rebels over the YPG and Iran, and has been specially organized and trained under the 20th Brigade by Turkey in northern Aleppo. Turkey has welcomed many leaders of the Ougaidat tribe in Turkey and is organized in northern Aleppo under the Jaysh al Sharqiyyah formation.

As tribes in Northern Syria share Turkey’s interest of kicking YPG out and US’ interest to contain Iran, they are looking forward for a Turkish operation in the east of the Euphrates.

Many tribesmen of the listed six above are also fighting under the umbrella of the National Army. In the past, all of these listed six tribes were formerly important supporters of the Free Syrian Army and provided many factions with supply and fighters. For these tribes, Turkey has to back a military operation east of the Euphrates to get rid of the invaders, and to re-gain control back over their hometowns. Therefore, in addition to many smaller tribes, these tribes are trying to push Turkey to take action. Another reason why these tribes prefer Turkey is their animosity against Iran and Iranian-backed Shia militias. The rejection of the Iranian role in Syria is hugely spread among the tribespeople. As tribes in Northern Syria share Turkey’s interest of kicking YPG out and US’ interest to contain Iran, they are looking forward for a Turkish operation in the east of the Euphrates.

The non-YPG elements in the Syrian Democratic Forces (SDF) obtained different attitudes in their relation within this umbrella. While some like the Sanadid Forces allied with the YPG based on mutual interests, others joined them because they perceived the YPG as the lesser evil in comparison to Daesh. For example, many of the fighters in south DeirEzzor are from the Shaitat tribe, while many others joined the Turkish-trained Ahrar al-Sharqiyyah in northern Aleppo. In case Turkey gets into these areas, many of the non-YPG elements within the SDF might defect and join the Turkish-trained umbrella as many of their relatives already joined the National Army.

In general, the tribes in YPG-held areas are sympathetic towards Turkey with the exception of the Shammar tribe. While Turkey and the U.S. discuss a potential safe-zone in northern Syria, especially in the areas below the 20-mile line, there are tribes who are close to Turkey and see opportunities in cooperating with Ankara in order to get rid of the YPG, prevent an Iranian expansion, and to ensure their own governance. While discussions about the declared partial withdrawal of the U.S. continues, depending on the goodwill of the U.S. and Turkey, the tribes in the region could function as a vehicle to ensure an agreement while preserving Turkish and American interests.