The US policy in northern Syria raises the question: could Turkey benefit more from a possible regional security alliance than US-orientated NATO policies? 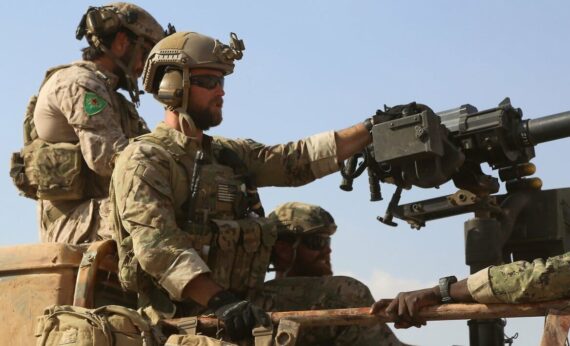 The United States pursues its national interests with four main instruments: power, peace, prosperity and principles. Power is the traditional tool of the realism school of international relations theory, used to deter a threat or to influence state and non-state actors in the area of interest. The US applies its military force overseas in conventional and unconventional manners. In a conventional approach, its forces are deployed overseas as a show of power to support an ally or to confront a direct threat to the US armed forces. More unconventionally, its special operations units are deployed to induce local armed actors to fight the US war in the area of interest. Through a series of US diplomatic, intellectual and economic efforts, locals – at least, a recognized opposition – are expected to feel a need for a new nation within an existing state authority that poses a threat to American interests. The sum of these efforts, supported by soft military power, is known as ‘nation creation policy’.

The motto of ‘de oppresso liber’ in the United States Army Special Forces is traditionally believed to mean ‘to liberate the oppressed’. The US Army Special Forces is the key actor in planning, organizing, executing and supervising nation creation operations on the ground. In nation creation efforts, the US avoids the deployment of large units of US soldiers on the ground, but entrusts the war effort to local, indigenous, armed opposition, as it did in Afghanistan against Soviet invasion during the 1980s.

In nation creation efforts, the US avoids the deployment of large units of US soldiers on the ground, but entrusts the war effort to local, indigenous, armed opposition.

The main body of the US Army Special Forces is composed of five active and two National Guard Special Forces Groups (SFG); each are usually composed of four active battalions with four combat companies. SFGs have the responsibility of special operations in different parts of the world. 1st Group is responsible for the Pacific countries (USPACOM area), 3rd Group is active in western Africa (USARAF area), 5th Group in the Arabian Peninsula and Central Asia (CENTCOM area), 7th Group in the Latin American countries (USSOUTHCOM) and 10th Group in Europe (USEUCOM area). 19th and 20th SFGs are the national guards – not active – and they are deployed to support the other groups when called to duty.

A Special Forces Company is composed of six Operational Detachment Alphas (ODA) and ODAs are the core element of the US Army Special Forces. A team of ODA is composed of twelve men of six specialties; two of the twelve men are officers, who command the team, together with the Team Sergeant. The Commander is the team leader and is responsible for organizing missions and briefing the team on mission objectives. The Assistant Detachment Commander is the officer and second in the chain of command, and is responsible for civil affairs. The remaining ten men are the Sergeants (NCOs), who serve in the same ODA for a long period of time. The Operations Sergeant (18Z) has the responsibility of Team Sergeant, and is the senior person and the most experienced soldier. The Intelligence Sergeant (18F) gathers and analyses mission-critical intelligence. Two Weapons Sergeants (18B) are responsible for the training of the local paramilitary elements in weaponry and ammunitions, ranging from small arms to anti-aircraft MANPADs (man-portable air-defense systems) such as Stingers, SA-7s and SA-18s.

Explosives experts teach the local armed elements how to improvise explosives with commercially available materials such as ammonium nitrate.

Man-portable anti-tank weapons such as the AT-4, FGM-148 Javelin and Kornet 9M113 are also taught by the weapons specialists. Two Engineering Sergeants (18C) train the local forces in mining and explosives. In nation creation operations, the US is reluctant to supply locals with mass destruction explosives in order to avoid international criminal courts; therefore, explosives experts teach the local armed elements how to improvise explosives with commercially available materials such as ammonium nitrate. Improvised Explosive Devices (IEDs) – handmade – are the deadliest weapons that paramilitary organizations use against designated targets. Two Medical Sergeants (18D) are the combat medics, who teach and operate in medical emergencies. These experts are also the sympathetic faces of the ODAs, and, as such, they carry out psychological operations to convince the local people to support the American presence on the ground. Wounded local fighters are also treated by these paramedics. Two Communications Sergeants (18C) teach indigenous armed elements how to use tactical radios.

The US Army Special Forces troops are trained through several phases in Fayetteville, North Carolina. After completing the training of small unit tactics and specialties mentioned above, they are isolated from the outside world and sent to a fictitious Unconventional Warfare Environment based on the scenarios in which Special Forces troops affiliate with non-state actors. Robin Sage is the name of the final phase where the troops play their roles in nation creation. The US Army Special Forces ODAs infiltrate the country, then organize the scattered resistance groups and, finally, turn the armed elements into an effective army in the projected nation.

The People’s Republic of Pineland is the name of the fictitious country invaded by a neighboring country and local militias ask for US military help to equip, train and organize against the enemy.

The People’s Republic of Pineland is the name of the fictitious country invaded by a neighboring country and local militias ask for US military help to equip, train and organize against the enemy. Fundamentally, the US Special Forces is accredited as the liberator of the Pineland. During the close relations with local armed partners, the US forces exchange their patches, coins and other symbols with the indigenous comrades as a show of respect and US support to the national cause of Pineland. US soldiers even wear the uniforms or insignias of local fighters. Like the Pineland scenario, Special Forces troops play their roles in other fictitious countries such as Attica, Aragon, Krasnovia and Atropia, coping with different situations in the world with divergent actors.

To Free the Oppressed or to Oppress the Already Free?

Terrorist organizations such as the YPG are never seen paving the way for the US Army Special Forces to infiltrate the countries of Pineland, Attica, Aragon, Krasnovia or Atropia. In 2015, the US Special Forces affiliated with the YPG – the Syrian branch of the PKK – in Syria and prompted a major terror threat against Turkey. The US denies the direct connections between the PKK and the YPG and describes the YPG as its local partner in Syria against ISIS. US officials visit the YPG fronts and encourage the PKK terrorists to fight against ISIS. Meanwhile, the US Army Special Forces units continue to arm, equip, train and supervise identical twins of the YPG and the PKK yet to be recognized as terrorists.

The PKK has adapted new tactics using IEDs and has killed hundreds of Turkish security personnel and civilians within Turkish territory since the US Special Forces were deployed in Syria.

The PKK has adapted new tactics using IEDs and has killed hundreds of Turkish security personnel and civilians within Turkish territory since the US Special Forces were deployed in Syria. Moreover, the PKK has also seized the weapons and ammunitions distributed to YPG elements by the US Army Special Forces and has used them against the Turkish security forces in Turkish territory. The US Army Special Forces units are able to provide and train the YPG (meaning the PKK) with MANPADs such as the SA-18 and anti-tank rockets such as the AT-4, FGM-148 Javelin and Kornet 9M113. PKK terrorists shot down a Turkish AH-1W Super Cobra with a Russian-made surface-to-air SA-18 on 13 May 2016. SA-18s can be easily obtained in Syria and transferred to the PKK; once the PKK missile operator is analyzed in video footage, it can be seen that he was newly trained. On the other hand, Turkish security forces captured an AT-4 anti-tank missile, which was distributed to YPG elements by the US forces, in the Nusaybin District of Mardin.

As in the Jundullah case in Pakistan, American pledges to fight against terrorism involve no aspect of Turkish security. The US pledges to fight against terrorists while working alongside another terrorist organization, which causes serious security problems for its allies such as Turkey and Pakistan. This raises the question, could Turkey benefit more from a possible regional security alliance than US-orientated NATO policies?