The US-Iran Rivalry in Iraq May Cause Another Popular Uprising

The U.S. administration has two options in Iraq: either to back track Trump’s harsh rhetoric on Iran and Iraq and accept to continue the previous U.S. administration’s policy of tacit agreement with Iran to keep Iraq out of their confrontation, or to continue the current escalation, which will lead to an inevitable clash in Iraq with a serious destabilizing spill-over for other countries in the region, including Turkey. 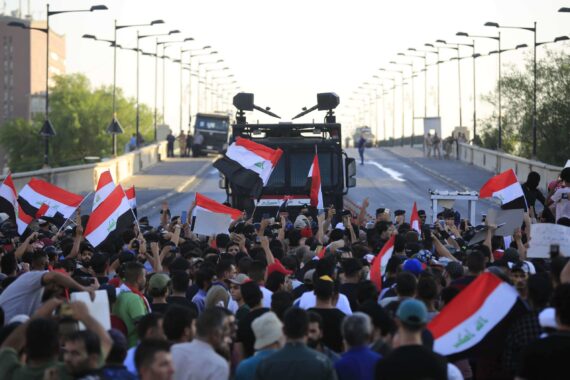 Iraqi people stage a protest against unemployment and power cuts demanding the government's resignation near the Green Zone in Baghdad, Iraq on July 20, 2018. Anadolu Agency

There are numerous indications on Iraq’s horizon that point to an impending popular rising in Iraq, similar to that took place in Basra and southern Iraq in 2018. This is due partially to the procrastination in completing Adil Abdul Mahdi’s government formation and the slow pace of promised reforms. U.S. President Donald Trump, whose foreign policy is driven by his own rhetoric to “make America great again,” is keen on confronting Iran’s hegemonic policies in the region. Being constrained by Russia in Syria and inconclusive war in Yemen led by the U.S.’s inefficient and crisis-ridden ally, Saudi Crown Prince Muhammad bin Salman, Trump seems to have decided that Iraq is the right theatre to deliver Iran a lesson.

The slow process of reform has already forced Muqtada Sadr, the leader of the powerful Sairun bloc, to issue Abdul Mahdi a warning that he has only 6 months left to form an efficient government, free of corrupt politicians and to implement the reforms promised. Sadr has the will and means to lead a powerful Iraq-wide street protest against Abdul Mahdi. Hussain Abdul Hussain, an Iraqi analyst and a visiting fellow at Chatham House wrote, “Change usually is the result of a shift in the political culture, reflecting a swing in the popular mood. Had Abdul-Mahdi made it to the premiership at the head of a reform movement, change might conceivably be on the cards. But it is unlikely that a prime minister who owes his job to the same groups that have been accused of corrupting the state will be able to fix the country.”

Trump seems to have decided that Iraq is the right theatre to deliver Iran a lesson.

What has complicated Abdul Mahdi’s insurmountable tasks is Trump’s recent pronouncements on Iraq, which have been considered by many as affront to Iraq’s sovereignty. His unexpected New Year visit to U.S. troops at the Ain Asad force base in western Iraq, in which he broke the tradition of informing Iraqis or meeting officials in Baghdad, had brought fire on the government from friends and opponents of the U.S. presence in Iraq.

During the visit, Trump mentioned the necessity of keeping U.S. troops in Iraq for a long time to come. A similar statement was made by him to CNBC on 3 February, 2019, in which he stated that the U.S. has “spent a fortune” on building an “incredible” military base in Iraq. “We might as well keep it. And one of the reasons I want to keep it is because I want to be looking a little bit at Iran, because Iran is a real problem,” he said. These added more fuel to the fire and forced most politicians from all political spectrums in Iraq to denounce these comments.

Even the pro-American Iraqi President Barham Salih issued a statement, saying that the U.S. “should not burden Iraq with its own policy priorities… U.S. troops in Iraq are there as part of an agreement between the two countries with a specific mission of combating terrorism.” The deputy speaker of the Iraqi Parliament pledged to pass a law “terminating the security agreement with America, in addition to ending the presence of American military trainers and advisors and foreigners on Iraqi soil.”

Some Iraqi lawmakers have pledged to draft a bill calling for the expulsion of U.S. forces altogether, while others have called for a revision of the agreement to increase the number of U.S. troops on Iraqi soil. The proposed bill has not yet been formally put in parliament’s official agenda for deliberations, but it has strong backing from Shiite political leaders and some Sunni groups. Sadr has already met with Hadi al-Ameri, the head of the powerful bloc of Fatah, and they have agreed to support a bill for the U.S. to leave the country. This forced Abdul Mahdi to make an announcement on 4 February, 2019, stating, “There are no U.S. military bases in Iraq. There are only U.S. civilian and military advisors that are there only as a part of an international coalition against terrorism. We disagree with President Trump’s statement of using Iraq as a base against any country.”

Some Iraqi lawmakers have pledged to draft a bill calling for the expulsion of U.S. forces altogether, while others have called for a revision of the agreement to increase the number of U.S. troops on Iraqi soil.

Besides, Trump insists that Iraqi officials wean off Iraq from the growing dependency on Iranian economic support, especially in the field of energy, where over half of Iraq’s electric power supply comes from. As the embargo begins to bite harder, Iran is left with a few options and depends more on Iraq in order to break its isolation. Iran has already taken a forward posture in this regard. Its oil and trade ministers have already visited Iraq and discussed numerous bilateral commercial deals. On 14 January, 2019, Iran’s Foreign Minister, Muhammed Zaref, accompanied by a large delegation of Iranian businessmen had also paid a visit to Iraq and signed numerous economic deals. He announced that President Hasan Rouhani will soon visit Iraq. In addition, Iraq’s Foreign Minister Muhammed al-Hakeem announced that Iraq is not bound with the U.S. embargo on Iran and that Iraq’s trade with Tehran accounted to $12 billion last year.

Should the U.S. continue to tighten the trade embargo on Iran, leaders of the latter have already stated that they would fight back with all means at their disposal. Iraq seems to be the weak spot of U.S. presence in the Middle East. The pro-Iranian al-Fateh bloc has already been drafting a new law in the Iraqi parliament, which desires to expel all U.S. troops from the country. If this bill passes, the U.S. will be in a very precarious condition and will probably ask its supporters to withdraw from the government. This will lead to the fall of the government and the withdrawal of U.S. troops to the north of Iraq, where the Kurdish administration will welcome U.S. troops. If this scenario happens, then the Iraqi people will no longer tolerate anarchy and a popular uprising will not be a remote possibility. Iraq will sink into a new and high intense civil war, very similar to what is happening in Yemen. Besides, many pro-Iranian Shiite militia leaders have already threatened to force U.S. troops out of Iraq.

If the bad scenario happens, then Iraq will sink into a new and high intense civil war, very similar to what is happening in Yemen.

On 9 February, 2019, the London-based Arabic daily al-Quds wrote, “The recent developments in Iraq indicate that the U.S. and Iranian clash is inevitable due to Trump’s stand on Iran.” According to the paper, U.S. troops found a missile in a site managed by the pro-Iranian Shiites, ready to attack the U.S. base where Trump visited. The U.S. will not take such measures lightly and will certainly hit back severely. On 30 January, 2019, al-Auqaz, the Saudi daily, reported that both the U.S. and Israel have recently sent clear warnings to the Iraqi government and that they are planning attacks on hostile Shiite militias in Iraq.

For these reasons, the U.S. administration has only two options for its policy on Iraq: either to back track Trump’s harsh rhetoric on Iran and Iraq and accept to continue the previous U.S. administration’s policy of tacit agreement with Iran to keep Iraq out of their confrontation, or to continue the current escalation, which will lead to an inevitable clash in Iraq with a serious destabilizing spill-over for other countries in the region, including Turkey. The latter should advise Iraq to keep out of the ongoing escalation between Iran and the U.S.