The US Needs to Re-engage with the Syrian Opposition

Daesh is now in a new era in which popular support and acceptable governance will be the main effective tools to grab the extremists from their pool of recruitment. 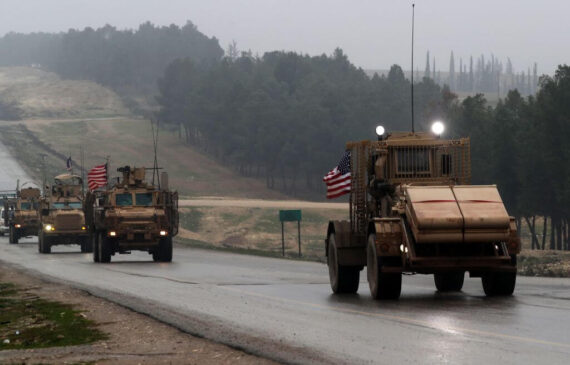 A picture taken on December 30, 2018, shows a line of US military vehicles in Syria's northern city of Manbij. DELIL SOULEIMAN/AFP/Getty Images

When the demonstrations in Syria started, the U.S. was fast on the very forefront, declaring its support to the demands for a democratic and free Syria. However, after 8 years of war, the U.S. has sidelined itself in the dispute between the Assad regime and the Syrian opposition, abandoning the later entirely. Nevertheless, the formulated U.S. ambitions in Syria bring up the need for the U.S. to re-engage with the Syrian opposition, namely the Syrian National Army. Otherwise, the U.S. goals for Syria will remain as meaningless words, likely to be redrafted by military measures of the regime axis.

According to U.S. Special Envoy James Jeffrey, the main goals of the U.S. in Syria are to ensure the defeat of Daesh, force Iran out of Syria and change the behavior of the Assad regime. While many in Washington think that they can enforce these terms by economic means – like sanctions as a stick and funds for reconstruction as a carrot – and staying inside Syria until U.S. terms are accepted, the regime axis does not seem impressed. The current carrot and stick strategy is based upon the assumption that the regime and Russia has a huge interest in re-building the formerly opposition-held areas it destroyed itself, and the miscalculation of the regime’s behavior. If economic sanctions would be enough to enforce terms on the regime, the regime would have accepted them when it was on the verge of collapse before the Russian intervention in 2015 and in 2013, when the regime almost lost control over all of Syria.

Many in Washington think that the U.S. can enforce its terms in Syria only by economic means – like sanctions as a stick and funds for reconstruction as a carrot.

In regards to Iran, I argued last week that the U.S. has limited options in Syria and has no real effective way of dealing with Iran in Syria. The last U.S. ambition in Syria is the enduring defeat of Daesh in which the U.S. has reportedly invested about $14.3 billion until June 30, 2017, but now the organization is re-grouping underground and conducting several attacks in Syria and Iraq. Some analysts like the ISW report suggests that Daesh has the capacity to capture an urban center. Focusing on Syria; there is a huge correlation between YPG-held areas and Daesh attacks.

In order to be capable of achieving any goals in Syria, the U.S. needs to re-engage with the Syrian opposition. I am not suggesting that the U.S. change its horses, but that it should come back to its first horse again. The U.S. has mainly abandoned the opposition for two reasons: First, the fight against Daesh, in which the U.S. has regarded the Syrian branch of the PKK the most effective, and second, the ties between the Syrian opposition and extremists.

Regardless of the truth in these arguments, currently none of them apply. The first fight against Daesh is now in a new era in which popular support and acceptable governance will be the main effective tools to grab the extremists from their pool of recruitment and target their survivability. In regards to Iran, the Syrian opposition is a natural enemy of Iran and empowering them will ultimately help to force Iranians out of Syria. By supporting the Syrian opposition, the U.S. will have more room to ‘change the behavior’ of the regime in line with the UN-coordinated process.

The U.S. needs to re-engage with the Syrian opposition. I am not suggesting that the U.S. change its horses, but that it should come back to its first horse again.

In this matter, the Syrian National Army (SNA) provides the U.S. with a good opportunity. Composed of Arabs, Turkmens and Kurds, the SNA is the official armed structure of the Syrian Interim Government, which was formed by the Syrian opposition. The areas held by the SNA are totally separated from any extremist faction. Of the 28 factions in the SNA, 13 were previously supported by the U.S., 11 were established after U.S. support came to an end, and 22 fought against Daesh.