The US Pretends No More in Giving Israel What it Wants

The Middle East as a whole has to live with a reality where the U.S. not only fails to provide leadership but reduces its role to supporting the Israeli cause with a few regional backers. A U.S. policy designed to appease the American evangelicals and the Netanyahu government can only spell further disaster. 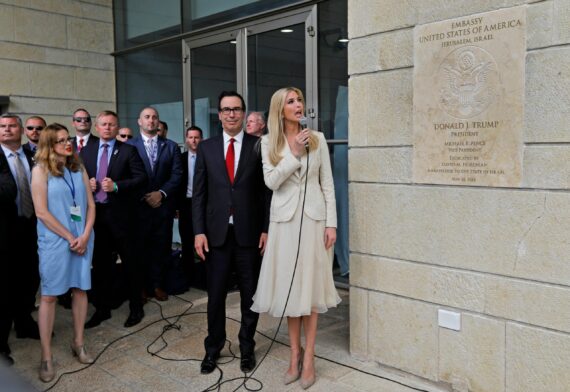 US Treasury Secretary Steve Mnuchin (L) and US President's daughter Ivanka Trump unveil an inauguration plaque during the opening of the US embassy in Jerusalem on May 14, 2018. Getty Images

There were two images broadcast to the world last week that illustrated the end of the U.S. role in the Middle East peace process as we know it. The contrast between celebratory images of the opening of the U.S. embassy in Jerusalem and the disturbing images of violence from Gaza was deeply unsettling. They were not only a reminder of the failed U.S. policy, but more importantly, an illustration of what might be in store for the region as a result of the Trump administration’s “disruptive” policies. If the Jerusalem decision is any indication, the administration’s next moves in the Israeli-Palestinian conflict will be to embrace and fully endorse the Israeli demands without any regard to the Palestinian aspirations, which can only bring about more violence and instability.

The administration has touted its unilateral Jerusalem move as honoring a long-held American promise and a recognition of the reality on the ground. That reality, however, is one that has been created by Israel under the watch of successive U.S. administrations. Israel has rarely, if ever, negotiated in good faith, always blaming the Palestinians for the failure of the by now defunct “peace process.” U.S. efforts to stop or even slow down the settlement activity proved futile in the past and the Trump administration is not even interested in trying. The U.S.’ Jerusalem recognition fits the pattern of Israel getting its way by deepening its occupation without giving up anything that would serve peace.

The U.S., as the only power that could exact a serious cost on the Israeli intransigence, is now choosing to sign on to a common cause with the Netanyahu government, which intends to destroy any Palestinian political aspirations. Holding Hamas responsible for Gaza’s plight while ignoring the Israeli attacks on Palestinian demonstrators along the Gaza border last week is a convenient tool of denying any legitimacy to Palestinian demands. The Trump administration as well as the U.S. Congress seem to have signed on to this approach. This is clearly siding with the Israeli agenda rather than recognizing the reality of the ever-deepening occupation.

President Trump delivered two major victories – withdrawal from the Iran nuclear deal and the Jerusalem move – to the Israeli Prime Minister Netanyahu within a matter of weeks without any Israeli concessions toward peace. With the Jerusalem move, he is delivering a major promise to its Evangelical supporters as well. Divisions and the muted response by the Arab world is all too clear and no regional power besides Turkey seems interested in supporting Palestinian aspirations in any serious way. Many commentators have pointed out the lack of strong reaction against the Jerusalem move and they may be right to a certain extent. However, the abandoning of the U.S. role in the peace process once and for all only confirms those who have argued all along that the U.S. is only interested in advancing and protecting Israel’s agenda.

The silver lining in the Jerusalem decision could have been that the U.S. no longer pretends to be an honest broker of peace. However, the administration continues to claim that the Jerusalem decision will actually serve peace and they have a plan to achieve it. The administration’s mysterious “peace plan” will likely be a unilateral one, receiving the support only of some of the Gulf nations and Israel. The Palestinian cause matters in the Middle East and it will not be resolved with the acquiescence of a few Arab nations to a unilateral declaration by the Trump administration.

The Jerusalem move reminds us that the U.S. role in the region under Trump promises to exacerbate existing fault lines and worsen conflicts. Trump has actually acknowledged the bankruptcy of the U.S. policy on the Israeli-Palestinian conflict but in such a way as to heighten tensions without a viable peace plan. The region as a whole has to live with a reality where the U.S. not only fails to provide leadership but reduces its role to supporting the Israeli cause with a few regional backers. A U.S. policy designed to appease the American evangelicals and the Netanyahu government can only spell further disaster.