The US refuses to extradite a terrorist

The extradition treaty between Turkey and the US, which was signed in 1978 and came into force two years later, covers offenses in both countries that are punishable by more than a year in prison. This includes “any offense committed or attempted against a head of state or head of a government.” 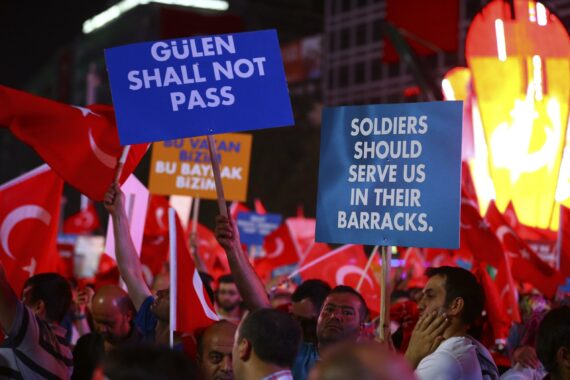 While the domestic fight against this terrorist organization has included the closure of FETO schools and withdrawing affiliated members from state institutions, the fight against FETO’s international branch has faced barriers from the US, which is home to the leader of the organization.

Speaking to Anadolu Agency, Turkish Justice Minister Abdulhamit Gül stated that the U.S. is obliged to extradite Fetullah Gülen to Turkey in line with a 1979 agreement between Washington and Ankara.

Gül mentioned that the treaty made a “probable cause” a sufficient reason to extradite a suspect.

While the U.S. has so far declined to hand over Gülen on the basis that Turkey has not provided sufficient evidence, Minister Gül said that there have been “five separate requisitions from the court and we have sent almost 100 folders of evidence, testimonies and confessions to the U.S.”

The extradition treaty between Turkey and the US, which was signed in 1978 and came into force two years later, covers offenses in both countries that are punishable by more than a year in prison. This includes “any offense committed or attempted against a head of state or head of a government.”

The treaty also adds that the countries “undertake to surrender to each other… all persons who are found within the territory or the requested party and who are being prosecuted for or have been charged with an offense.”

In addition to activities in Turkey, the terrorist organization is also well-known to be active in Africa.

During the Turkey-Africa Education Ministries Conference, held at Istanbul’s Ciragan Palace, Ismet Yilmaz called for the closure of FETO schools in Africa.

While highlighting the deep roots between Turkey and the African continent, Minister Yilmaz said: “We expect our brother African countries to cooperate more with Turkey to wage a better fight” against FETO schools.

In contribution to its fight against the international wing of FETO, the Turkish administration established the Maarif Foundation, which was designed in order to take over the administration of overseas schools linked to FETO.

Nineteen African countries have already handed over FETO schools to Maarif or have closed them at Ankara’s request.

More, during a joint press conference with visiting Nigerian President Muhammadu Buhari, at the presidential complex in Ankara, President Erdogan stated: “I would like to express that there is no difference between FETO, Daesh and Boko Haram. No matter what they serve or claim or their name – all of them are gangs of murderers who feed on the blood of innocents.”

Commenting on the terror faced in Nigeria by Boko Haram, the President emphasized that “We stand by our Nigerian friends on their fight against terrorism.”

Erdogan also urged Nigeria to take steps on shutting FETO-run schools in the country and to coordinate with Turkey to combat the terrorist group.