The Weakness of the Turkish Opposition

There are three interrelated weaknesses of the Turkish opposition: the lack of ideological inclusiveness, the lack of leadership, and the lack of shared values. 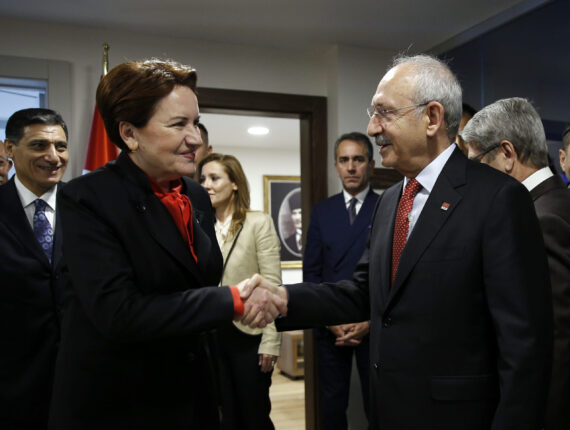 As Turkey gets closer to the presidential election date – June 24 – the main historical dilemma of Turkish politics reemerges for the opposition politicians. The dilemma arises from three interrelated weaknesses of the Turkish opposition: the lack of ideological inclusiveness, the lack of leadership and the lack of shared values. The debates about who will be running as an opposition candidate against President Erdogan remains complicated. The strategy that the opposition blocks have embraced for the snap election is an important indicator of the weakness of the anti-Erdogan camp, which is composed of the secularist People’s Republican Party (CHP), the nationalist Good Party (IP, also known as Iyi Party), the Islamist Felicity Party (SP), and the Kurdish nationalist Peoples’ Democratic Party (HDP).

The opposition strategy is based on three important dynamics, and each one of them, ironically, displays the weakness of the anti-Erdogan camp. The opposition bloc led by Kemal Kilicdaroglu who is the leader of CHP, first and foremost, noticed that the strategy based on only party politics cannot provide a strong leverage to defeat President Erdogan in the upcoming presidential election. Since the first democratic election held in 1950, the percentage of transitivity between different ideological parties has always been quite low in Turkey. On the other hand, the nature of transitivity between the parties located on similar ideological lines is relatively different, and the percentage compared to the first case is higher. Therefore, as the representative party of secular-nationalism in Turkey, the CHP cannot possibly gain any ideological and political ground in elections. For this presidential election, according to the new constitutional amendment, the presidential nominees should pass a 50 percent threshold to win. Thus, the best strategy for the anti-Erdogan camp is to find a presidential candidate who will be able to represent all sects of society.

Abdullah Gul, who was the last president of the parliamentary system before Erdogan, became one of the strongest alternatives for the anti-Erdogan block. However, at the same time, the ideological diversity among the opposition block became the main weakness of the anti-Erdogan camp and prevented them from supporting Gul as a nominee against Erdogan. While the CHP represents anti-Erdogan politics, which constructed itself around the assertive secularist discourse, the IP represents the nationalist right-wing, despite the fact that the party has a good percentage of Kemalist-secular representatives. The ideological position of the SP within Turkish politics can be located within the tradition of political Islam.

The pro-PKK Kurdish HDP in this picture illustrates a totally different ideological performance. To express the matter bluntly, the hybrid political and ideological nature of the anti-Erdogan block could not support Gul as a common candidate. The ideological diversity cannot be the only reason in analyzing the failure of the opposition block. The judgment of Gul among the opposition groups constitutes another determinant factor behind this failure. A potential candidate of CHP, Muharrem Ince, who also run as a candidate for leadership against Kemal Kilicdaroglu in CHP’s party congress, frames Gul as “an accomplice and brother of Erdogan.”

The weakness of the anti-Erdogan camp is not limited with the ideological divergence among the opposition block. The lack of leadership is another factor that shapes this vulnerability. From a historical perspective, the leadership has been an important factor in winning elections, sustaining power and transforming Turkish politics. Erdogan, as one of the strongest politicians and an influential actor, has been winning elections (12 times), maintaining power, and transforming Turkish politics since the AK Party came to power in 2002. The opposition bloc, on the other hand, never brought this kind of leadership into the political arena. The first attempt was in the 2014 presidential election, but it failed. This time, Abdullah Gul was constructed as the leader of the anti-Erdogan camp without the consideration that he could never win any single election as a leader of any political party in Turkey. More importantly, Abdullah Gul, as a political person has constructed his political personality along with Erdogan in Turkey. Other potential candidates on behalf of the anti-Erdogan camp do not also display strong leadership.

In addition to the leadership dilemma, the representation of societal values is another problem for the anti-Erdogan block. This, for sure, is a consequence of the historical and ideological trajectories of Turkish politics. The success of the AK Party is the ability to mobilize the basic values of Turkish society within daily politics. In this regard, AK Party and President Erdogan himself cannot be confronted by a hybrid nature of political discourses constructed by the anti-Erdogan block. For this anti-Erdogan block, there is no coherent political strategy regarding the question of how Turkey deals with current challenges emanating from domestic and regional issues, but an inadequate plan to defeat Erdogan in the upcoming election. At this stage, anti-Erdoganism is far from responding to the challenges of Turkey and has many weaknesses as an opposition strategy.