Trump will continue to pull the brakes on any figure that might begin to overshadow him, just like he did in the Bannon case. 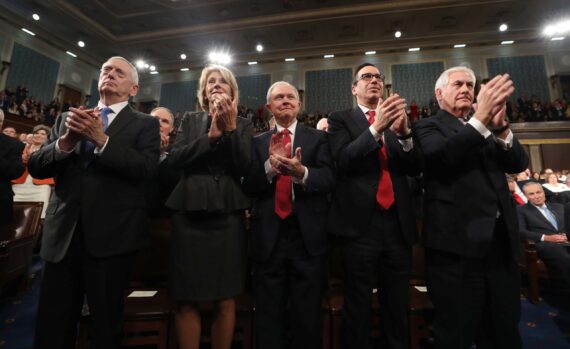 (L-R) Cabinet members James Mattis, Betsy DeVos, Jeff Sessions, Steve Mnuchin and Rex Tillerson applaud as US President Donald J. Trump delivers his first address to a joint session of Congress from the floor of the House of Representatives in Washington, United States on February 28, 2017.

After recovering from the first shock caused by Donald Trump’s unexpected victory in the U.S. presidential elections, the U.S.-based analysts began speculating on what kind of an inner circle Trump was going to form. During his election campaign, Trump promised that he would wage a war on the Washington establishment, highlighting it as one of the backbones of his campaign with the assertion that he was an alternative to the political elites in Washington. For weeks, various rumors and speculations over who would serve in the Trump administration followed one another.

When Trump overtly waged a war on political elites and the establishment during his campaign, dozens of foreign policy and security experts close to the Republican Party announced that they would not accept any position in Trump’s team despite the fact that he was a Republican candidate. Among the ones releasing such statements were names who were formerly in key positions especially during the term of a Republican leader. As Trump’s staff in charge of appointments put a distance to the names who once issued negative remarks on Trump, the repository of available experts became inevitably restricted to a serious extent.

This subject matter was frequently discussed during the appointment procedures that ran quite slowly in the transition period following the elections. The first appointments of Trump hinted that he was keeping his promise with regard to fighting the political elites. For instance, Steve Bannon, who was among Trump’s strategists during the campaign period, is known to be a name confronting elites for years on the radio shows he hosted. As Bannon, who represents the far-right, and names like Stephen Gorka were appointed to the White House, President Trump sought to smoothen the reactions by assigning the Republican National Committee (RNC) Chairman Reince Priebus as White House Chief of Staff, which is one of the most critical positions in the White House. This choice was interpreted as Trump’s effort to build a dialogue with the political elite since the RNC’s chair was assigned to the position that would primarily be in charge of relations with Congress. Soon after these two names were announced, comments suggesting that the two might contend each other comprised one of the top topics on the agenda. Bannon’s greatest advantage was his personal affinity to the President while Priebus had an upper hand since his position has direct access to the President.

While successively making unexpected appointments to the White House, in considering the confirmation process, President Trump chose not to take risks in regards to Cabinet positions and assigned names that would appeal to a majority of the Senate. For example, while Retired General James Mattis, who is respected by both parties, was appointed as the Secretary of Defense, Exxon company’s CEO Rex Tillerson was appointed as the Secretary of State. These names were welcomed by the Washington bureaucracy, who were closely following the appointment process. During the appointments procedure, what would happen to the positions of general John Kelly, who was appointed as the Secretary of Homeland Security, and Mike Flynn, who was appointed as the National Security Advisor, was another matter of question in the overall picture. Although Flynn was formerly Director of the Defense Intelligence Agency, the comments made about him during and in the aftermath of his term in office stressed his unusual profile. Furthermore, Jared Kushner, who is arguably less popular compared to the other names, was appointed as senior advisor to the President. This prompted a series of questions as to what kind of balance policy Trump would adopt amongst these names.

Endeavoring to accomplish domestic and foreign political objectives with a team comprising of names with such different backgrounds was one of the most significant challenges Trump was to confront. He faced the first challenge in this respect while trying to form the National Security Council (NSC). Bannon was included in the NSC while the Chairman of the Joint Chiefs of Staff and the CIA Director were removed, which led to the speculations that Bannon became the second man all of a sudden. Subsequently, it was highly discussed that Bannon was the name behind the travel ban on people from six Muslim-majority countries, being among the first campaign promises implemented by the Trump administration. Within this process, Bannon was present at the Oval Office during the telephone conversations Trump made with world leaders, which consolidated this assumption. The rising influence of Bannon spurred the hearsay that Priebus was particularly uncomfortable with this situation and it led to tension between the two.

Successive Dismissals in the White House

The rise of Steve Bannon in the White House, which had previously been viewed as unavoidable, has been stopped personally by the President. The mention of Bannon as the chief strategist of the White House prompted Trump to declare abruptly on TV that he was the actual chief strategist of the administration and Bannon was ultimately an official under his command. Shortly after this, details surrounding the inner conflicts within the White House administration began to leak to the press. First, it was leaked that Trump was not sufficiently informed on the decision to include Bannon in the NSC. Shortly after the news surfaced, Bannon lost his place on the Council. Next, Bannon was portrayed as the mastermind behind the much-disputed travel ban concerning visitors from six Muslim-majority countries. The situation got complicated further by the allegations that Trump’s daughter Ivanka and her husband Jared Kushner also opposed Bannon’s influence within the White House. These moves undoubtedly significantly damaged the public profile of Bannon.

While it was wondered when Bannon would be dismissed from the White House, White House Chief of Staff Reince Priebus was unexpectedly forced out of his position. This decision made Priebus the shortest-serving Chief of Staff in White House history. The explicit reasons for the dismissal are unknown. Informed guesses include reasons such as Priebus not being effective enough in defending Trump, Trump holding Priebus responsible for the failure of his healthcare bill in the Senate and Trump never fully trusting Priebus. But the words of Anthony Scaramucci, the White House communications director at the time who was appointed days before Priebus’ dismissal, are thought to have been influential in this process. Scaramucci had previously signaled in an interview with a journalist that the dismissal would occur by using scathing remarks towards Priebus.

Shortly after the dismissal of Priebus, the Secretary of Homeland Security John Kelly was appointed as Chief of Staff. With this decision, the two most important positions within the White House administration, Secretary of Homeland Security and Chief of Staff, were both occupied by officials with a military background. The decision thus highlighted Trump’s preference in favour of individuals with military backgrounds in his appointments. The first move by Kelly, who was viewed as having the seniority and experience required to calm the storm within the administration, was to sack Scaramucci, making Scaramucci the shortest serving communications director in White House history. Following Priebus’ dismissal, groups close to Bannon began a campaign against the National Security Advisor McMaster. The information leaked to the press had been portraying McMaster as opposing Flynn and Bannon’s influence within the NSC by removing officials thought to be close to them. This process again ended with an announcement from Trump.

The previous week, in the aftermath of this process and as the waters of the White House administration seemed to calm, Bannon was ousted from his position. As with Priebus’, Bannon’s dismissal has many underlying reasons.  The events that occurred in Charlottesville and the rise of far-right extremism, plus the newly published book named “Devil’s Bargain” detailing the relationship between Bannon and Trump are thought to have been important factors in Trump’s decision. The emphasis Trump places in portraying his election victory as solely his own has been a source of tension in the relationship between him and Bannon from the very beginning. But the atmosphere that triggered Bannon’s dismissal was created by Kelly and his decision to take an initiative regarding Bannon. Thus, Bannon, the biggest link between far-right extremism and the White House, was dismissed from the administration. It seems that retired military officials such as Mattis, McMaster, Kelly and former businesspeople such as Kushner and Tillerson will play the most effective role in the administration.

Has the storm in the Trump administration calmed?

At this point, it seems that the turmoil within the Trump administration, or at least within the White House, has calmed down and even if another power struggle occurs it will not be as loud and obvious. Of course, Trump can influence this process with unexpected moves. It is unknown how two important figures such as Kelly and McMaster will influence Trump’s policies and how much they will be able to shield Trump from crises. How Kelly will influence the relationship between Trump and Congress is an especially curious point since Kelly does not have a background neither with Congress nor with the Republican party. McMaster, who was appointed after Flynn’s dismissal, will likely remain target of the far-right due to his removal of certain individuals from the NSC. However, his influence in matters of foreign policy and security is unlikely to wane due to his relationships with Mattis and Tillerson. Jared Kushner will continue to be one of the biggest game changers in any fractions and power struggles that might occur in the future. So far Kushner has preferred to work with more conventional figures.

All these names within the administration will also be tested by the problems that come with Trump’s unpredictable Twitter announcements. Trump will continue to pull the brakes on any figure that might begin to overshadow him, just like he did in the Bannon case. The situation within the White House is seemingly calm now, but the power struggles based on other concerns and topics will likely continue in the foreseeable future.

The administration’s problems outside the White House might possibly continue. Trump and Attorney General Jeff Sessions have not been seeing eye-to-eye recently. Trump has been criticizing Sessions due to his decision to recuse himself from the investigation into Russian interference in the U.S. elections. The investigation that influenced the dismissals of Comey and Flynn might also negatively impact Trump’s relations with his close associates.

Dr. Kanat is currently the Research Director at the SETA Foundation in Washington D.C. and Assistant Professor at Penn State University, Erie.